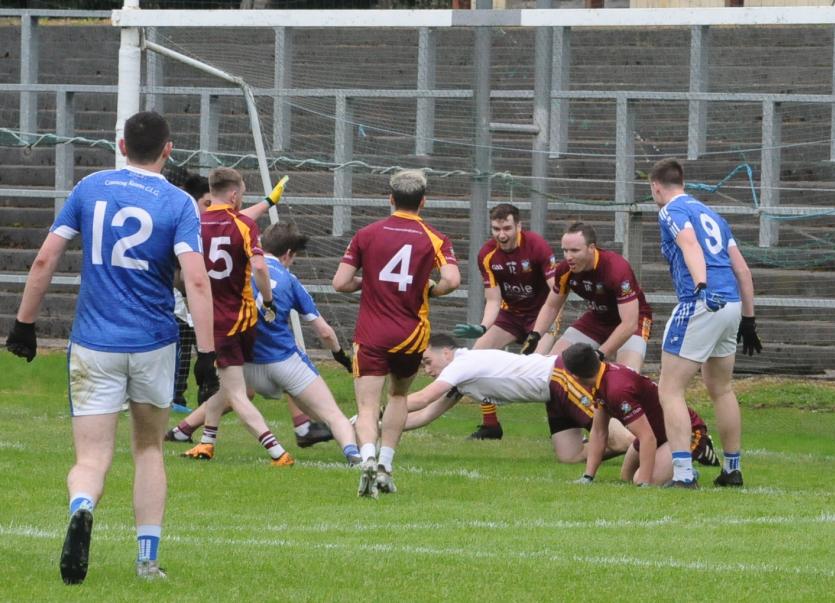 Relief for Annaduff at the final whistle, frustration for Carrigallen as Karl Foley's team made it back to the Smith Monumentals Leitrim Intermediate Football Championship Final for the second time in three years after a weird but entertaining semi-final in Avantcard Pairc Sean Mac Diarmada on Saturday.

Annaduff looked as if they would walk into this year's final when they hit Carrigallen with three hammer blow goals in the first six minutes and it seemed as if this match would be a non-event when they struck for a fourth goal just three minutes into the second half.

An 11 point lead look impossible for a disjointed and unfocussed Carrigallen to overcome but they roared back into this game with two goals in as many minutes, pinning an increasingly nervous Annaduff back in their own half as, led by Marc Dolan, Eoin Ward and Gary Reynolds, the men in blue & white ate away at that lead until there was just a point between the sides.

Dolan's free as the second half ticked into added time left a point between the teams and if you were a betting man, you'd have put your house on Carrigallen to take the win at that point. But, showing great resilience, Annaduff managed to end a 23 minute scoring famine with a crucial Eoin Gill.

There was still more time for drama - Gary Reynolds launched a long range free into the Annaduff goalmouth, Darragh Burke rose highest to make a spectacular and vital catch but the ball was knocked out of his grasp. As a Carrigallen foot stretched to knock the ball to the net, Burke leapt to smoother the ball, still clearly in the square, gathered the ball and cleared the danger as the final whistle sounded.

Annaduff's joy at reaching the final was tempered very much by their frustration as their second half display saw them miss some clear cut goal chances while a bit of finish line anxiety might have infected their play as they tried to play out time rather than attack with the abandon they normally show.

Carrigallen will wonder what might have been - they outscored Annaduff 2-9 to 1-5 from the seventh minute on and missed some good chances in the second half. It looked as if they didn't really catch fire until the second half but once they did, they did almost enough to book a place in the final - something that will frustrate them greatly.

The early minutes were cagey with neither side on top but that all changed on four minutes. Gary Reynolds played a free from under the main stand across the field to an unmarked keeper Enda Lyons who advanced up the field and played a pass inside the Annaduff fifty to a team colleague.

That's where the problem started for Carrigallen: A long ball found Gavin O'Brien unmarked and despite being 45 yards out on the left wing, the Carrigallen defence seemed unaware that Lyons had been bypassed by the long ball and wasn't in between the posts. O'Brien then went for the spectacular - a 45 yard effort that incredibly flew straight to the net for a killer goal.

Barely had the surprised cheers died down and Annaduff were celebrating again - a poor kickout was intercepted and O'Brien launched a rocket to the Carrigallen net, stunning the men in blue. It got worse as, about 90 seconds later, they were picking the ball out of the net as Conor Reynolds' charge through the middle saw him find an unmarked Sean McNabola close to goal and then it was 3-0 to 0-0!

It took eight minutes for a rattled Carrigallen to reply, 35 yard Marc Dolan free while Liam O'Rourke blazed a goal chance wide with 11 minutes left in the half. Dolan tagged on another point after a good run and the midfielder hit his third a minute later after good work from Eoin Ward and Brian O'Rourke.

Ray Cox steadied Annaduff with a brilliant solo effort, winning a long ball and breaking free to score and Sean McNabola added a free to leave Annaduff with a 3-2 to 0-3 halftime lead.

Liam O'Rourke's mark led to a second minute Carrigallen point but it seemed as if the game was over as Annaduff struck for 1-1 in the next two minutes. Ray Cox took a mark from a Jack Hughes pass and scored but a brilliant pass from Ray Cox, a man we described in the preview as a wily old fox, found Cathal Cox in space in front of goal.

The midfielder was taken down, referee Gareth Foley pointed to the spot and Alan Glancy buried the ball in the net to leave Annaduff a seemingly impregnable 4-3 to 0-4 in front after four minutes.

Carrigallen steadied themselves with a lovely Padraig Doyle score from a tight angle but Eoin Gill hit back with a point on 39 minutes. Incredibly, Annaduff would not score for 23 minutes as Carrigallen started to eat into their lead.

It didn't seem like that as Annaduff kept pushing forward. Enda Lyons made a great save from Kenny Cox who was put clear through while at the other end, Pat McCann was taken down by Darragh Burke with Gerard Percival striking the penalty to the net.

Barely a minute later, Carrigallen had a second goal, Eoin Gill creating the goal for Percival and suddenly there was just five points between the team.

The drama just wouldn't stop as, within 60 seconds, Annaduff had a second penalty when Ray Cox was fouled after winning a high ball. But this time, Enda Lyons made the stop with a fantastic save although it has to be pointed out that the Carrigllen keeper must have been at least three yards off his line when Alan Glancy struck the ball.

A Dolan free was followed by a superb Eoin Ward point and the gap was now a goal with ten minutes of normal time left. Gary Reynolds swept over a brilliant long range free but Carrigallen started to seize up a bit. Dolan saw a free hit the post before he converted a second placed ball with the game just into injury time.

With both teams falling victim to cramp after an intense game, Eoin Ward snatched at a chance to tie the scores. Annaduff should have scored when Eoin Gill burst through but he hit wide. However, the Annaduff man made amends with a crucial point at the end of a well worked move.

That left Carrigallen needing a goal but the closest they came was when Burke dropped the ball into the area before the Annaduff keeper redeemed himself with a last gasp save.