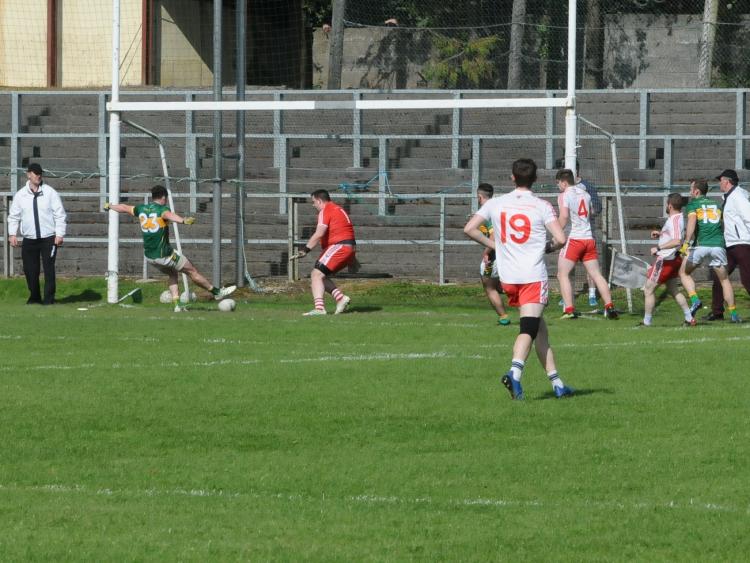 The scoreline of this exciting Smith Monumentals Intermediate Championship Semi-Final is a little misleading as Gortletteragh needed extra-time to see off a dogged St Patrick’s Dromahair on Sunday afternoon in Avantcard Pairc Sean Mac Diarmada.

This was a roller coaster of a game - Dromahair looked a class above as they led by eight points at halftime but a ferocious fightback from Gortletteragh in the second half saw them eat away at that lead before a Padraig Gallagher goal eight minutes from time seemed to suggest the end of the north Leitrim men.

But in the battle of two relegated senior teams from last year, there was another twist as Dromahair grabbed a goal out of nowhere, a goal with a fair bit of controversy after referee Patrick Guckian had blown for a free as Cian Clinton was in the process of shooting and then allowed the goal.

Dromahair, under the cosh for so long in the second half, then dominated the closing minutes but saw Cian Clinton hit a free in injury time go wide into the face of a strong wind, the match ending after just over 80 seconds of the three announced minutes of added time.

That sent the game to extra-time and what a start as Jack Heslin gathered from the throw and soloed through to score a spectacular goal. Dromahair almost hit back with a goal of their own only for keeper Barry Tiernan to make a full length diving save.

The drama continued when Francie Flynn’s long range free got a touch off Cathal McCrann to end up in the Dromahair net, leaving them six points ahead after the first five minutes of the first period of extra-time.

That gave Gortletteragh a six point lead and after such a ferocious battle, a tired Dromahair couldn’t muster the energy to break down a renewed Gortletteragh who eventually had ten points to spare by the time this epic encounter ended.

Shane Morrison and James Clancy both hit good points in the first two minutes to get Dromahair up and running but Gortletteragh came right back with well worked scores from James Campbell and Conor Reynolds.

Gary Fowley put the ball in the Gortletteragh net only to have the score rightly disallowed for overcarrying but a dominant Dromahair, playing with the strong wind behind him, put it behind them when Michael Clancy intercepted and set up James Clancy for a good point.

Clancy added a mark before Francie Flynn converted a free after 17 minutes.

But from there to halftime, it was all Dromahair as Gary Fowley collected a long Cian Clinton delivery and drove the ball high over the bar. Clinton then pointed a 52 yard free after an off-the-ball foul was spotted and Fowley added another when he combined with James Clancy to work a goal chance but he raised his shot too high.

Dromahair keeper John McGoldrick made a great save to deny James Campbell a goal and Dromahair went down the field when they cut through the Gortletteragh. James Clancy’s first effort was blocked but the ball came through for Gary Fowley to poke to the net from close range.

Adrian Fowley walloped the ball over the bar from somewhere near 60 yards before Jamie Conlon did likewise from 50 yards to extend the lead to nine points. Francie Flynn had a bit of  clanger when a 21 yard free from in front of the posts hit the upright and rebounded clear.

However, Gortletteragh did get a vital score when Niall Woods grabbed a breaking ball in close to the Dromahair goal and he pointed to leave Dromahair with a 1-9 to 0-4 halftime lead.

Gortletteragh had the wind in the second half and rarely have I seen a team make such good use of the wind as they hit a succession of points from 50 yards plus. Jack Heslin got them going on two minutes before James Clancy blazed a good goal chance over the bar for Dromahair.

Jamie Conlon broke a tackle and soloed in from distance to score but when Niall Woods forced a turnover, Jack Heslin sent the ball over the bar on six minutes. From the kickout, Heslin ran through for an easy point before Cathal McCrann fired over a mark from about 45 yards.

That left six points between the teams and points from Campbell, Flynn (free) and McCrann (mark) had that gap down to a goal after 43 minutes of action. Clinton responded with a high free into the wind that just dropped onto the top of the Gortletteragh net.

But Gortletteragh were winning virtually every ball in the middle of the park, midfielders Niall Woods and John Reynolds scoring points. Gortletteragh had a couple of chances to equalise but missed them.

However, when they did score, it was huge - Cathal McCrann’s shot dropped that just bit short but Dromahair keeper McGoldrick got caught out by the dropping ball, spilling the ball at the feet of sub Keoghan McGovern who played the ball across the goal for another sub Padraig Gallagher to tap the ball home.

Dromahair hit back immediately with a good Clancy point but a point apiece from Flynn and Gallagher seemed to suggest that Gortletteragh were moving away from a dogged Dromahair.

But then came a moment of controversy as Cian Clinton went on a 50 yard run, under pressure all the time. Clinton managed to hold off players dragging at him and drove a shot from the left into the far corner - the controversy coming as referee Guckian blew the whistle for a free.

Dromahair were incensed but after running in, the official signalled the goal would stand, now it was Gortletteragh who were incensed. I thought the whistle sounded as Clinton was in the act of shooting, more thought it came before the shot but the goal stood and Dromahair were reinvigorated!

That led to extra-time and the drama that followed, Heslin and McCrann’s goals killing off the stubborn Dromahair challenge along with points for Flynn (two frees) in response to one from Clinton.

Gortletteragh finished on a high when Jack Heslin scored a fourth goal for the winners to seal their place in the final.