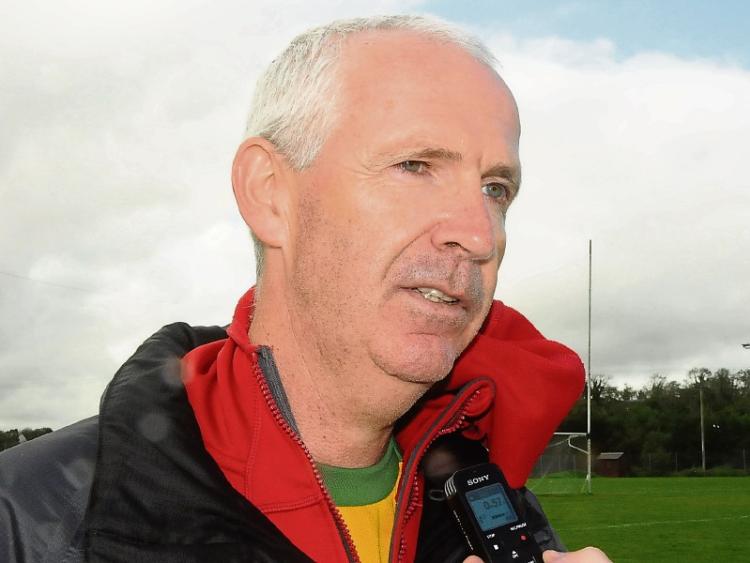 It wasn’t a day for good football, or even any football, but Conor Harte was delighted with the test his Ballinamore Sean O’Heslins players received from Kiltubrid before booking their place in next Sunday’s Gotham Dry Wall Ladies SFC Final.

Speaking after their 4-14 to 4-7 victory over Kiltubrid in last Sunday's rearranged semi-final, Conor told the Observer “More relieved than delighted, we had an expectation coming into this game that Kiltubrid didn’t play to our potential the day we played them in the park.

“Conditions today were much different, it was a day for heart rather than skill and I thought both teams gave it their all. We probably shaded in terms of taking more chances but it was a super performance from both teams. We’re delighted, we have a week to prepare but that was probably the toughest game we played all year.”

The Ballinamore manager admitted that Kiltubrid’s fast start and the conditions played a big pat in his team’s early struggles: “It took a while to settle and sometimes when you are playing with a strong wind, you’re expecting to score every time you go up and the field and when you miss a couple of chances, it does dent the confidence a bit.

“We said we weren’t going to panic when they got the goals, it was early in the game, we kept the heads down and kept working and the girls dug out the chances, Kiltubrid certainly didn’t make it easy for us.”

Kiltubrid’s deep lying defence hampered the hard running Ballinamore attack and Conor agreed it was something to be looked at: “That’s something we probably have to have a look at because it is a tactic a lot of teams use now.”

But quite genuinely, Conor was thrilled with the test his team received: “We have a week to prepare for the final but it was a really good test in terms of skills, stamina, playing against a really tough opponent in really tough conditions. You’d like to think if we had two weeks to recover, it might be worth more to us but a week to recover.

“It was quite a physical game, which we will expect next week as well but the girls stood up, got the tackles in, turned over the ball. There are lots of things we can improve on but at the same time, what you want from a team is attitude and we had that in spades.”

As for the final, Conor didn’t seek to downplay or dismiss the importance of the game for Ballinamore: “It is brilliant to be in a final, first time to be in a final so we’re really looking forward to it, we’ve nothing to lose.”

Of course, old hand that he is, Conor wasn’t adverse to making Glencar/ Manorhamilton favourites even if his own team had beaten the north Leitrim women in the group stages: “The expectations are all on Manorhamilton because having lost two, they’ll be really gunning for it and they’ve set their stall out in a really big way this year.

“It was good to beat them in the group stages but no more than the Kiltubrid game, group games are group games, the dynamic completely changes when it is a do or die effort. They have the experience of a few finals under their belt but the expectations are also all on them.”

Neither does he expect a repeat of that high scoring encounter, citing Glencar/Manor’s hard fought win over St Joseph’s: “Similar to us, they didn’t get it easy but they took goal chances and there were plenty of goals here today. It could be a totally different game, it depends on conditions but both of us have shown we can stick our heads down and fight for every ball.”

Conor was hopeful that fans would get to attend the final but Ballinamore are determined to enjoy the experience whatever else happens: “We can go in relax, enjoy it and give it our best on the day. You’d like to see fans but it would be great if people could attend but it is what it is. We’re lucky to be involved playing football during a pandemic. It’ll be live streamed I’m sure by both teams so our supporters will see it I’m sure.”

And Ballinamore will be going in with confidence according to Conor: “After our performance here today, that will certainly have given us more confidence. We’re not going in to be whipping dogs in this one, we’ll certainly give ourselves every chance to win it.”