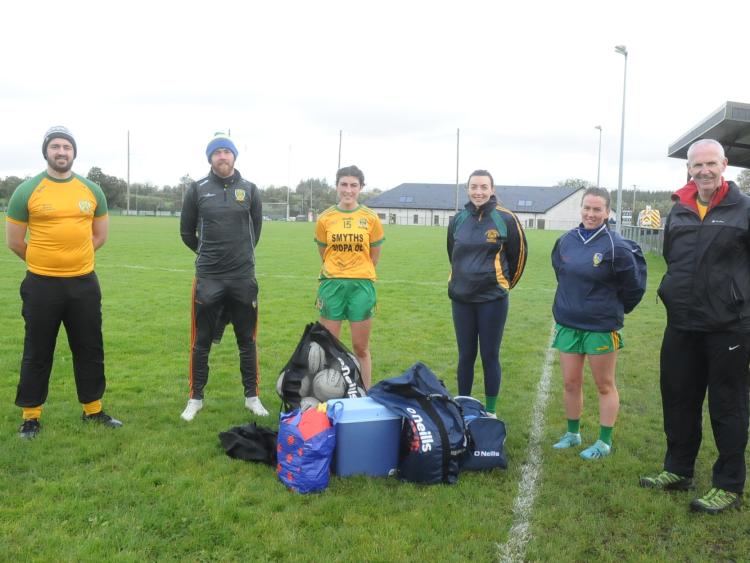 They may be appearing in their first ever Gotham Dry Wall Ladies SFC Final but that doesn’t mean Ballinamore Sean O’Heslins won’t enjoy their history making feats according to captain Laura O’Dowd.

Speaking after a hard fought 4-14 to 4-7 victory over Kiltubrid last Sunday, Laura is relishing Ballinamore’s first ever appearance in a Ladies Senior Final: “We’re going to give it everything we have, we’ve made history in the club - first Ladies team to make a County Senior Final and we’re not going to give that up without a threat.

“We’re going in as the underdogs and that is exactly the way we want it. They’ve been there three years now so they have the experience but we’re not going to let that stop us, we’re going to give it everything we have.

The Leitrim star is also expecting a tough, tough battle with Glencar/ Manorhamilton next Sunday: “It is going to be an absolute battle from the first kick right to the end. We know what Manorhamilton are like, they are so good and they’re obviously going to have so much confidence after beating St Joseph’s last weekend.

“But I think we’re well prepared - we’ve been preparing for this final since day one and I know it is only one week now but I don’t think having one less week is going to make any difference now.”

Laura believes that Ballinamore’s emerging strength in depth has played a big role in their march to the final: “There were no individual players out there today, it was the team and I think that is the biggest thing about this year, why we’re so different, is that we play so much more as a team.

“Before now, it would have been relying on one or two players but now it is the whole unit, everybody is standing up from one to 30, the girls who came on there. Throughout all the games, we’ve relied on them a lot and I think that is going to be a driving force for us next weekend.”

Looking back on last Sunday’s semi-final, Laura said she and her teammates were expecting nothing less than a battle from Kiltubrid: “It was an extremely hard game, they were a totally different team to who we played a few weeks ago and we were expecting that.

The pressure of the occasion, with so much at stake, may have played its role in Ballinamore’s stuttering start: “I think obviously a senior semi-final is different to the round robin games, it is only our second ever semi-final so there were definitely nerves and it took us 15 minutes to settle down but we gradually did settle in.”

Neither did two early Kiltubrid goals help! “No, that was definitely not in the plan so it wasn’t but I think we recovered well from it, we took our scores, we kept popping the chances over until we caught up with them and then we pushed on from there.

“Their set-up in the defence was very good, it was difficult for us to get by. I suppose we did get the scores when we needed them in the second half but they made it extremely hard. The wind definitely picked up in the second half, that’s no excuse and we should have kicked a few moreover that we did but at the end of the day, we’re delighted to be in the final.”