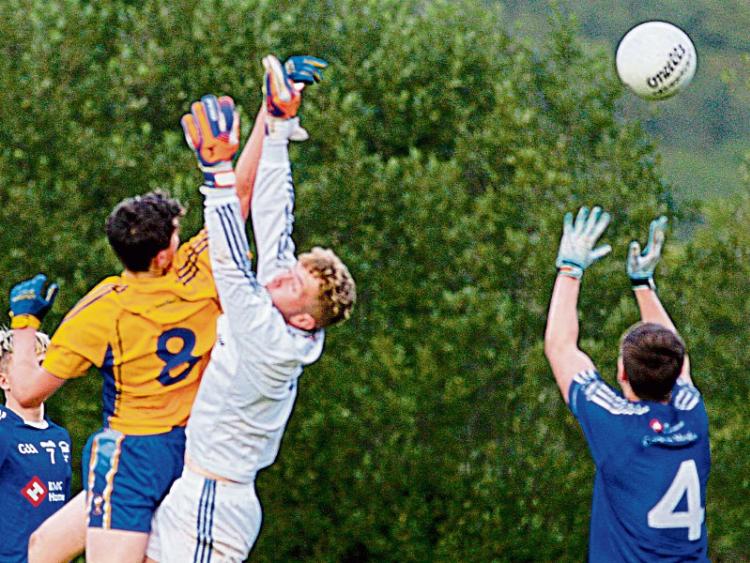 Glencar/Manor's Barry McNulty gets to the ball ahead of Melvin Gaels keeper Eoghan Furrey to flick the ball to the net in the Newtowngore Engineering U17 Division 2 Final Picture: James Molloy

In what was only the second ever county final played in Glencar Community Park last Friday, an impressive Glencar/Manorhamilton chalked up an easy 17 point win over their north Leitrim rivals, Melvin Gaels in the Newtowngore Engineering U17 Division 2 final.

Melvin Gaels really put it up to Glencar/Manor in the opening quarter when it was a tit for tat battle but goals from Barry McNulty & Gabriel Gilbride turned the tide firmly in Glencar/ Manor’s favour.

After these two scores, a brave Melvin Gaels side found themselves chasing the game but Glencar/Manor proved that they had too much oil in the tank for Melvin Gaels despite the Gaels best efforts to turn the tables.

Melvin Gaels was quickest of the mark when Aaron Brennan opened the scoring in the game with a well hit third minute point. Cian McManus levelled matters three minutes later when he tapped over a Glencar/Manor free.

Barry McNulty put Manor ahead for the first time in the proceedings when he shot over from play three minutes later. But Melvin Gaels dramatically grabbed the lead again when Aaron Brennan hammered to the net after a ball had rebounded off the upright and was passed to the unmarked Brennan by a teammate.

Glencar/Manor reduced Melvin Gaels’ advantage to the minimum almost immediately when Mathew Connolly’s well flighted ‘45’ sailed between the Kinlough side’s posts. But Gero Gilmartin kept the Gaels in the driving seat when he shot over on the 13-minute mark.

Mathew Connolly replied with a point from play a minute later. Gero Gilmartin restored the two-point advantage in the contest when converting a 16th minute placed ball.

Glencar/Manor managed to get their noses in front just prior to the water break when Barry McNulty flicked a McManus free to the net. After the second quarter restart, Manor pulled further ahead when Gabriel Gilbride fired to the net.

Points by Mathew Connolly and Barry McNulty (free) before the break put Glencar/Manor ahead by 2-6 to 1-3 at the interval. Melvin Gaels suffered a further blow before the break when Sean McNiece received a black card, which meant his side had to play almost ten minutes of the second half with 14 players.

After the restart, it was tit for tat with Dylan Gilligan & Barry McNulty on the mark for Glencar/Manor with Gero Gilmartin & J.J. Lipsett scoring for Melvin Gaels.

A 42nd minute goal by Cian McManus signalled that his side were on course for what would become a runaway win.

After that Glencar/Manor hit six unanswered points with Barry McNulty hitting four frees while Mathew Connolly and Dylan Gilligan chipped in with a point apiece.

Sub Joe Stewart got Melvin Gaels last score when he hit over a 55th minute point. After that Glencar/ Manor ran out easy winners with Gabriel Gilbride and Cathal O’Connell hitting over a point each while Barry McNulty completed the scoring in the game by converting a late free.