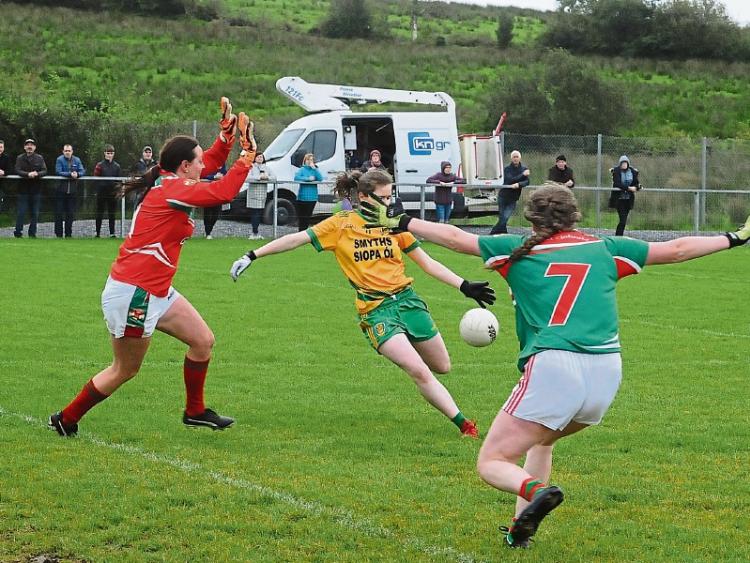 Ballinamore's Roisin McHugh fires a shot at the Kiltubrid goal that is saved on the line by a hidden Sinead Tighe Picture: Willie Donnellan

It might not have seemed like it at the time for either team but Kiltubrid did Ballinamore Sean O'Heslins a massive favour last Sunday in the Gotham Dry Wall Ladies SFC Semi-Final by literally putting them to the pin of their collars to qualify for next Sunday's Final.

Ballinamore were hot favourites going into this game but Kiltubrid, two time Connacht Club finalists, were determined to cause an upset and started with two goals in the first ten minutes that stunned and upset the Ballinamore women.

Wasting chance after chance against a rock solid Kiltubrid defence, O'Heslins eventually found their way past their opponents and seemed to be cruising to the final as they led by 13 points just five minutes into the second half.

But Kiltubrid, backed by the huge wind that O'Heslins also used so effectively, would not lie down and goals from Emma Guckian and Aoife McWeeney suddenly had Kiltubrid just three points behind with momentum behind them and more than five minutes of normal time left on the clock.

But Ballinamore really showed their guts and stood tall with Laura O'Dowd immediately hitting a crucial point before an injury time goal from Emma McGovern, perhaps the top goal scorer i the championship, gave Ballinamore a slightly more comfortable seven point victory than it felt.

What this game will do is settle Ballinamore for their final clash with Glencar/ Manor, certainly they won't be losing the run of themselves after this game.

Against the strong wind, Kiltubrid took the game to Ballinamore and Michelle Guckian had two points on the board inside two minutes. Niamh Donohue saw a shot hit woodwork before Laura O'Dowd pointed but Kiltubrid goaled, with a bit of luck, when Guckian's free fell short, came off a defender and Teresa Mylott tapped home from close range.

Ballinamore almost had the perfect response but Sinead Tighe saved Roisin McHugh's shot on the line. Laura O'Dowd got a second point but Ballinamore were reeling when Emma Guckian's shot proved too high for keeper Michaela Harte and ended up in the net on nine minutes.

The breakthrough came when Ballinamore broke from defence, Roisin McHugh played a great pass over the top to Emma McGovern who buried the ball in the net to tie the scores after 16 minutes.

That score liberated the Ballinamore women as they hit 1-6 before halftime. Eilish, Ciara and Laura O'Dowd hit five points between them while McGovern also fired over but the crucial score was a goal for Laura O'Dowd, coming after a Kiltubrid free was intercepted.

That left Ballinamore 2-12 to 2-3 in front and they extended the lead with a good Donohue point in the first minute. Even playing against the wind, Ballinamore seemed comfortable as Eilish O'Dowd was fouled and Roisin McHugh tucked the spot kick away to extend the lead to an incredible 13 points.

Kiltubrid started a slow comeback with points from Mylott and Guckian but the big score came, again with a bit of luck, when a long Emma Guckian shot bounced off the keeper and slipped into the net to cut the lead to eight points with 43 minutes gone.

Michelle Guckian had a shot held on the line by Eilish O'Dowd but two Guckian free cut the gap. Ballinamore were dominated possession but when Kiltubrid turned them over, long quick balls created scoring opportunities.

Their fourth goal came from a long ball - another Emma Guckian long ball came off the keeper and Aoife McWeeney drove the ball to the net with six minutes left.

That really got the crowd going but Ballinamore's response was impressive, Laura O'Dowd pointing and they kept Kiltubrid at bay until sub Emma Honeyman found McGovern behind the Kiltubrid cover and she found the net from a tight angle.