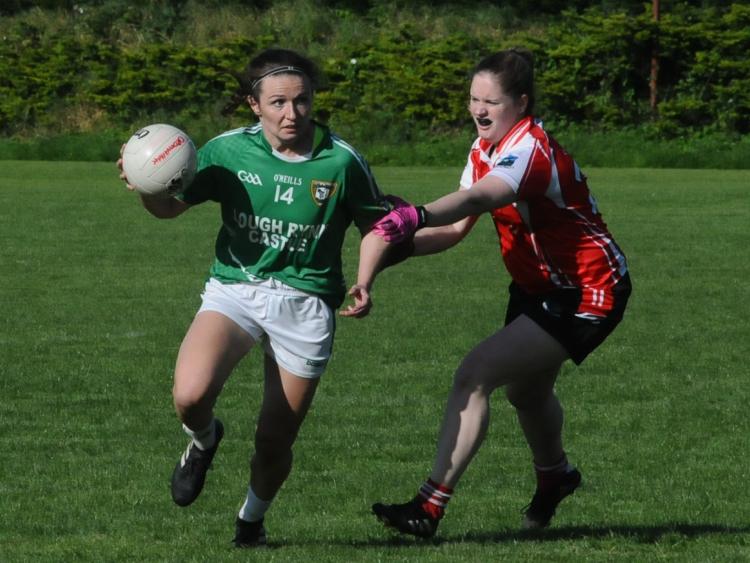 Inspired by player of the match Dearbhaile Beirne, a dominant and powerful Mohill proved far too strong for a young Dromahair side in Saturday's McGovern Brothers London Leitrim Ladies Intermediate Football Championship Final at a sunny but windy Pairc Sheain Ui Eslin, Ballinamore.

With crowds allowed back in, the teams had an atmosphere to back up their efforts but it was the Mohill contingent who had most to cheer as, backed by the strong wind in the first half, they built up an unassailable lead against a young but outclassed Dromahair team.

Perhaps calling them outclassed is a bit harsh for without Beirne, this might have been a close and exciting final such was her contribution to Mohill's victory. Incredibly, Beirne was not near top form as she missed quite a few good chances but the difference was Mohill had her and Dromahair did not.

With her attacking prowess, Mohill always had a threat going forward while Dromahair relied far too heavily on the exciting but very young Amy Fowley. Ploughing a lone furrow and maybe not getting as much protection or support as she deserved, Fowley tried everything but outnumbered on every occasion, it was a frustration afternoon for the youngster.

For Mohill, Nicole Higgins did a good job in containing Fowley with some great help from Caoimhe Canning while Claire and Niamh Beirne were very impressive on either side of the forty. Emma Quinn, Laura Casey, Charlene Tyrell, Denise Stenson and captain Deirdre Ward all came up with big performances.

Mohill got off to a bright start with a Dearbhaile Beirne free inside the first 60 seconds followed by a good point from Emma Quinn, sidestepping a defender at speed, to point. Mohill had two bad wides from Dearbhaile Beirne while Amy Fowley shot wide for Dromahair.

Deirdre Ward fired over nicely from distance on six minutes with Foley again missing the target before Beirne cut in from the wing to put Mohill four points clear after nine minutes.

Mohill almost goaled when Dearbhaile Beirne’s close range strike smashed into the face of Dromahair keeper Aoife McTiernan but after another wide, Dearbhaile Beirne made amends when Niamh Beirne intercepted a poor kickout and played the full-forward through for an easy goal on 13 minutes.

A second goal soon followed - Deirdre Ward’s brilliant pass found Niamh Beirne unmarked in front of the Dromahair goal and she finished with style to stretch the lead to 2-4 to no score. Dromahair did get off the mark on 18 minutes when the battling Amy Fowley scored a good point.

But any faint hopes Dromahair had were brutally ended two minutes later when Dearbhaile Beirne’s long range shot was misjudged on the wind by keeper McTiernan and ended up in the back of the net.

Mohill had a couple of bad wides but Amy Fowley converted a late free, moved in because a Mohill defender encroached on the kicker, to leave Mohill with a commanding 3-4 to 0-2 lead.

Mohill made sure there would be no Dromahair fightback with two converted Dearbhaile Beirne frees in the first six minutes of the second half.

Dromahair did get a lift when a long ball to Amy Fowley saw the lively full-forward taken down by Nicole Higgins, Fowley dusting herself off to fire home the penalty off the outstretched leg of keeper Aoife O’Brien.

That score came after 43 minutes but in a game filled with a lot of errors from both slides, there were to be just one more score from each side. Charlene Tyrell fired over from distance midway through the half while Amy Fowley converted a free with ten minutes of normal time left.

I say normal time because, by the watch of those in the pressroom, the match actually ended early - after 29 minutes and 33 seconds. Stopping our watches for the water break and restarting them exactly on time, match officials announced that there would be three minutes of added time.

As it transpired we never got that far with the linesman signalling the added time with just less than five minutes of normal time left. It is not the first time that there has been a time keeping lapse in championship football last year but thankfully, the gap was large enough between the teams to ensure it did not become an issue.