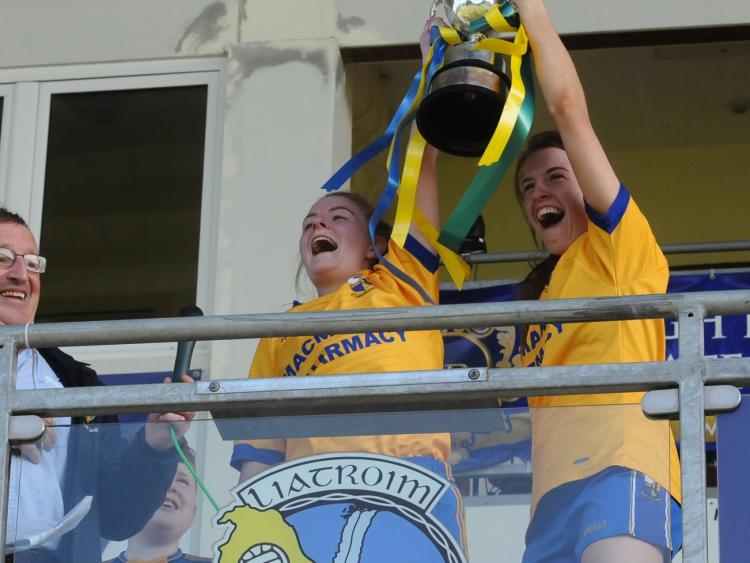 Glencar/Manorhamilton erased the disappointments of the last two years in style in Avantcard Pairc Sean Mac Diarmada on Sunday when they swept aside the challenge of Ballinamore Sean O'Heslins to cruise to victory in the Gotham Dry Wall New York Ladies SFC Final.

Predicted many years ago as future winners of the title, Glencar/Manorhamilton saw their captains Rebecca Rooney and Eimer Feely lift the cup for the first time in the club's history as they started in blistering fashion and never allowed a Ballinamore side who had beaten them in the group stages to get into the game.

With Ailbhe Clancy delivering a tour de force for the new champions, scoring 12 points on the day, Glencar/Manorhamilton just had too much strength in every sector for the field for Ballinamore.

It was obvious early on that nerves were badly affecting Ballinamore with passes going over the sideline and uncharacteristic handling errors and Glencar/Manorhamilton made sure there was to be no escape as they built up a ten point lead before the O'Heslins squad even found the target.

Glencar/Manorhamilton were intent on laying down an early marker and they certainly did with Muireann Devaney popping over a free inside a minute before Ailbhe Clancy opened her account with a free a minute later.

Clancy added a free before Glencar/Manor got their a bit of luck when Devaney’s long range free deceived the Ballinamore keeper and crept in under the bar. With Clancy adding a third point on six minutes, Ballinamore were already facing a seven point deficit.

It didn’t get any better as Eadaoin Clancy’s blistering run cut open the Ballinamore defence and Muireann Devaney fired to the net for her second goal and a ten point lead for her team. A shell shocked Ballinamore tried to reorganise by dropping a sweeper back but the damage was done.

Roisin McHugh got their first score on ten minutes from a free after a foul on Laura O’Dowd on the run. Niamh Donohue saw a free hit the woodwork while Leah Fox pointed after good work from Devaney on 12 minutes.

Ballinamore did get a lifeline when Eilish O’Dowd’s powerful run was halted by a bad tackle inside the area, Roisin McHugh brilliantly sending the spot kick top the net. Three minutes later, Eilish O’Dowd set up McHugh for a brilliant point as Ballinamore finally seemed to be finding their feet.

But two wides from McHugh were punished in ruthless fashion when Emma McLaughlin made a vital block on a Ballinamore clearance, the ball worked to Dearbhla Rooney some 30 to 40 yards out the field, the wing-forward charging in before showing neat footwork to evade the defenders and plant the ball in the net.

Ballinamore should have goaled when they had a three on one on the Manor defence but all they could manage was an Emma McGovern point. Ailbhe Clancy replied with a free while sub Mollie Murphy scored a good point to leave the halftime score at 3-6 to 1-4 in favour of Glencar/Manorhamilton.

Laura O’Dowd opened the second half scoring, a long ball into Emma McGovern led to her point but Ailbhe Clancy hit back with a free. Megan McGovern’s powerful run and strong point was followed by a good Laura O’Dowd score to cut the gap to six points after four minutes of the second half.

Ailbhe Clancy responded with a free while Ballinamore keeper Michaela Harte did well to bat a Clancy shot clear under pressure while she also made a great save to deny Devaney a goal, the ball going out for a fifty from which Clancy scored after a short fifty routine.

Clancy then swapped frees with McHugh but the gap was slowly but surely growing as Clancy (2) and Rooney added points before McHugh got another free on 19 minutes after a long run.

With the gap at nine points, Glencar/Manor cut loose as Ballinamore tired in the final ten minutes, putting a somewhat unfair reflection on the game. Two Devaney frees were followed by one each from play for Clancy and Devaney.