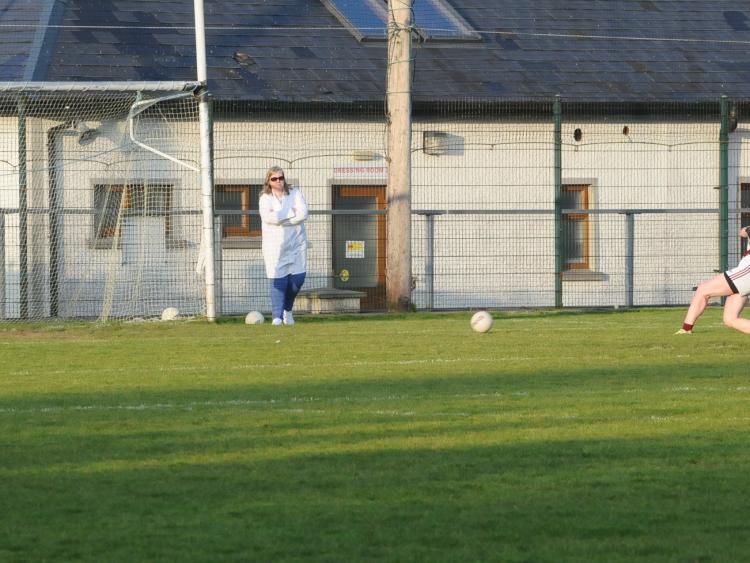 The drama and excitement had the crowd at fever pitch in the closing stages as Fenagh, who led 3-7 to 0-3 after ten minutes of the second half, saw their lead wiped out as a previously lethargic Drumkeerin burst into life.

Anne Marie Gallagher led the Drumkeerin charge as they showed remarkable spirit and guts to fight back to get the draw and again in extra-time when it looked as if a rejuvenated Fenagh had taken the title.

There was controversy too in this dramatic with Fenagh incensed over a decision from referee Jimmy Stenson to penalise them over a fifty, leading to Drumkeerin's dramatic equalising point. About to take a fifty but not sure of what options to take, a Fenagh player picked the ball off the ground to take the placed ball from the hand.

Referee Jimmy Stenson blew his whistle and Drumkeerin grabbed the ball and immediately counter-attacked, correctly winning a free that Gallagher converted to send the game to extra time.

Many felt, including myself, that a throw-ball should have been the correct decision but after reading the rules of the LGFA, it seems that referee Jimmy Stenson may have made the right decision depending on your interpretation of the rules and what his decision was for.

If he penalised Fenagh for delaying the game, then rule 415 states a free is awarded to the opposition. However, rule 381 states that should a player taking a forty-five foul the ball, the kick shall be retaken! So, as clear as mud.

Fenagh’s annoyance was understandable but it should not take away from a truly remarkable Drumkeerin fightback. Fenagh had chances to kill off this game but no score for the last 20 plus minutes of normal time proved their downfall.

Drumkeerin opened brightly and quickly with Ella McNamara scoring inside a minute and they looked as if they got a perfect start when Anna Hazlett robbed keeper Elizabeth Honeyman but was then fouled. Unfortunately for Drumkeerin, McNamara’s spot kick went wide of the posts.

Anne Marie Gallagher followed up with a point, matched by a Ciara McLoughlin free but Fenagh dramatically took the lead when they broke upfield and Roisin O’Toole set up Leah Smith for a well taken goal on seven minutes.

Both teams missed chances before two McLoughlin frees, the second a tad harsh, put them four clear midway through the half. Gallagher swept over a free before Honeyman made a good save to deny Niamh McPartlan a goal after 17 minutes.

Points from Sarah Rowley and McLoughlin extended the lead to five points and it looked as if Fenagh were taking a giant leap towards the title when an overeager challenge from Niamh Ryan knocked over Sarah Rowley, conceding a penalty that Ciara McLoughlin sent to the net on 21 minutes.

McLoughlin added another point as Fenagh led 2-6 to 0-3 at the halftime break, a lead quickly extended when Roisin O’Toole fired over a good point immediately after the restart. Both sides had bad wides but Drumkeerin suffered a big blow when Niamh McPartlan received a yellow card and ten minutes in the sin bin.

It looked all over when Ciara McLoughlin netted for the second time after a brilliant length of the field move but instead it seemed to set Drumkeerin free. Good points from Gallagher and Aimee O’Grady got the big Drumkeerin crowd into the game and it helped their players on the field.

A high ball into the Fenagh goalmouth was batted out where Anne Marie Gallagher promptly lashed it to the net to get the comeback up and running on 15 minutes. Almost straight away, Ella McNamara fired over a good point and when Gallagher tapped over another free, there was no only six points between the teams.

Drumkeerin were living on the edge with keeper Niamh Ryan making a vital save from suib Caoimhe McDermott and two more Anne Marie Gallagher frees had just four points between the teams with just over five minutes of time left.

However, Fenagh seemed to be holding out well but, as the game ticked into added time, Niamh McPartlan hit a brilliant effort from distance high into the Fenagh net to leave just a point between the teams.

Controversy arose when Fenagh had a fifty over four minutes into added time but dithered too long. However, instead of a hop ball, referee Jimmy Stenson allowed Drumkeerin to take a free and they went down the field where Rachel Smith brought down a Drumkeerin player, earning a yellow card in the process.

Anne Marie Gallagher held her nerve to send the free over the bar and Drumkeerin almost snatched it at the death only for Hazlett to shoot wide, leaving the scores level at 2-10 to 3-7.

Drumkeerin went in front with a Gallagher free but Ciara McLoughlin hit back. Shannon O’Grady scored just before the break to leave Drumkeerin a point to the good.

Ciara McLoughlin levelled the scores early in the second half as both teams wasted chances. Honeyman made a good save from McPartlan and when McLoughlin put over a free after six minutes, it looked as if they were going to hold on for a win.

But in a last gasp attack, Anne Marie Gallagher managed to feed the ball to Anna Hazlett who managed to tip the ball past the onrushing keeper in a race to the ball and then slotted it home for the match winning score.

Fenagh tried to hit back but never got a close enough look at goal and the game ended with Anne Marie Gallagher seeing a shot hit the crossbar before the final whistle sounded.