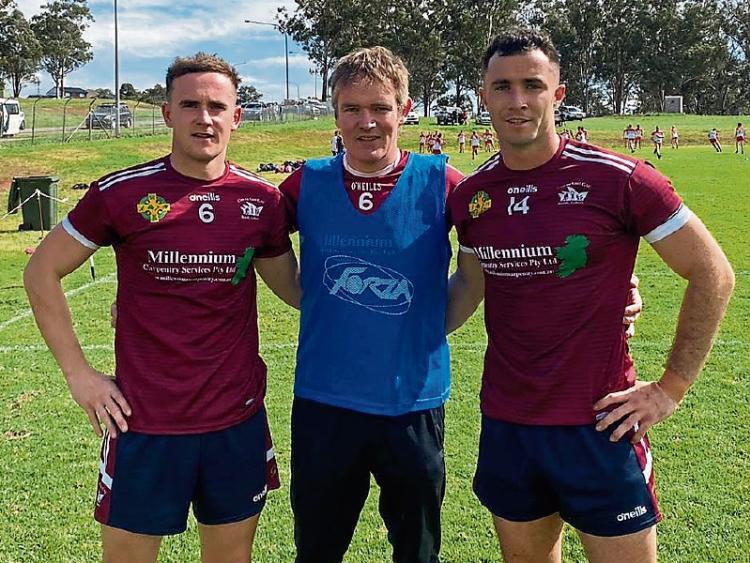 Main Picture: They may be on the other side of the world but three former Leitrim players joined together last weekend to contest the New South Wales Senior Men's Championship Finals. Former Leitrim captain Micheal McWeeney joined Donncha Lynch of Allen Gaels and his former Leitrim colleague Nevin O'Donnell on the Clan na Gael team who unfortunately lost out 2-12 to 1-13 to Michael Cusacks. Both Micheal, who will surely be cheering on St Mary's in Sunday's County Final, and Nevin had impressive displays as they lined out at centre-back and full-forward

After a fantastic championship full of excitement and intrigue, one thing struck me forcibly that while we all rush to herald the impact of fresh, exciting youth, we don’t spend enough time extolling the virtues of the veterans, those wily old foxes who add so much to the game.

Just look at all the teams in action next weekend and each are blessed with exciting young talent that gets us up off our seats. But each of the four teams contesting the Connacht Gold Senior and Smith Monumentals Intermediate Finals have a couple of wily old foxes quietly guiding them on the field of play.

Now calling someone a veteran is probably a good way of insulting someone and comes with images of creaking old bones that runs slower than a glacier, so I’ve come up with a few euphemisms over the years such as the 'long serving' or the 'vastly experienced'! Perhaps we should use the athletics term 'Masters' for that is what they truly are at this stage.

Sometimes we’re too quick to push that experience out the door, lessons hard learned when a young team is struggling to make a breakthrough but lacking the hard won experience from years of toil and effort and the confidence that comes from having been there, done that!

These thoughts popped into my head when I was interviewing Karl Foley about his Annaduff’s team chances against Gortletteragh. Talk turned to Ray Cox, a man who was an impact sub in Karl’s first year in charge two seasons ago but who is now starting and played a vital role in Annaduff’s semi-final victory over Carrigallen.

Now, I’ve been watching Ray twist and turn defenders inside out for, it must be, the guts of 20 years and it has always been a treat to watch him on the field. Never gives less than 100%, always plays with a smile and a fantastic attitude - can Annaduff’s young players have a better example of what it means to play for their club?

Gortletteragh’s young guns can say much the same about Cathal McCrann. In deep trouble against Dromahair in the semi-final, McCrann’s introduction wasn't about spectacular feats but a few simple marks here and there and a bit of guidance steadied the young lads and drove his team on.

Maybe its easier for older player to survive at the lower grade but look at Sunday’s Senior Finalists!

Ronan Kennedy is a key man in Mohill’s bid for glory but it is a long 14 years since we wrote of Ronan and his compadre Daniel Beck shocking St Mary’s in the 2006 Final. Both are still there next Sunday, playing key roles for the favourites, fighting every inch and lending their experience to this young exciting Mohill team.

Age is no barrier to excellence and proof of the pudding was Kennedy’s semi-final display that could be used as an instructional dvd of how a forward should time his runs and how to use the mark.

You just can’t buy that sort of innate experience and know-how!

We talk of St Mary’s youth and rightly so, the same with Mohill, Annaduff & Gortletteragh, for it brings fearlessness, ambition and excitement and I’m a huge advocate of giving youth its chance.

But the Carrick men have a steely spine of experience at the heart of their team with Robbie Lowe, Alan Doherty, Ray Mulvey, James Glancy, Jonathan Cassidy and Nicholas McWeeney among others giving years of long, distinguished service to Mary’s. The impact the young lads have made for Carrick is huge but would they be where they are without the older lads?

So, if you’re tempted to roar abuse at some of these great servants next weekend for being too old or too slow, remember their teams wouldn’t be where they are without these wily old foxes.

I’ve often preached that we should show more patience towards referees and all learn the rules a bit more but I fell into that trap last Sunday myself at the Ladies Junior Final, wondering just how Jimmy Stenson could turn a fifty for Fenagh into a free for Drumkeerin, a free that led to an equaliser.

Now, I have no skin in the battle, no leaning towards either team but I just couldn’t figure the decision. Not until I went and looked at the LGFA rulebook and found that the penalty for delaying a fifty is indeed a free to the other side - something I wasn't aware of and differs from the rules in the Men's game.

Jimmy endured what was a fairly typical day for any referee in Leitrim last Sunday - he got it with both barrels from both teams and their supporters. And if it is hard for a referee to endure, just think what it is like for their families, be they parents, brothers or sisters or even children.

It is a job I wouldn’t do in 100 years so fair is fair, we give out when we think they get it wrong and it’s only fair to say when they get it right - spot on with a big decision Jimmy.

From losers to winners - the magic of sport!

Talk about what a difference a year makes! Last year, the footballers of Glencar/ Manorhamilton, Mohill and Drumkeerin were all down in the dumps after losing their respective Ladies County Finals. Last weekend, it was a very different story all three celebrated victory on a magical weekend for Ladies football in the county and bringing an end to a wonderful club championship.

It will be small comfort right now but maybe a glimmer of hope for Ballinamore Sean O'Heslins, St Patrick's Dromahair and Fenagh!

Now this is going to seem like a complete volte face after talking about respect for referees but over the past couple of weeks, I’ve noticed an issue with timekeeping with more than one game falling short of the 30 minute mark.

Apparently referees have been told to allow the clock run during the water breaks in the middle of both halves but to me that system is flawed. Two minutes are allowed for water breaks but between players running to and from position, those water breaks are more like three minutes and that’s where the trouble starts.

Fans expect the added time to go up on the board with two minutes of playing time left but in reality, they are going up with about five minutes left on the clock. Then all we hear is the constant baying for the final whistle to sound because fans and players think there was just two minutes to go! I hate to see a final decided on a short half.

Wouldn’t it be simpler and far more accurate for a referee and his assistants to simply stop their watch and restart on the first kick after the break? It would ensure an accurate reflection of the time played and cut out all controversy - maybe something to consider.