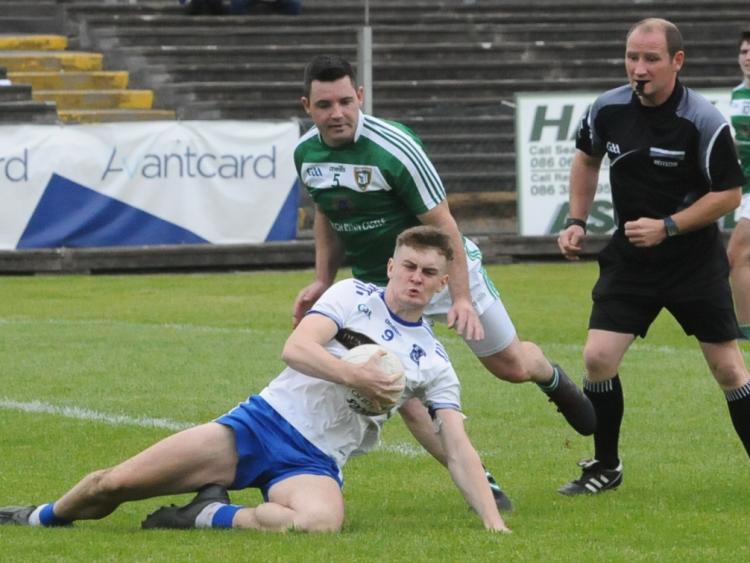 A clearly superior Mohill stormed to an eighth Fenagh Cup against a battling, determined and highly focussed St Mary's Kiltoghert last Sunday but the immense physical power of the Mohill men, honed by years of sweat, blood and tears, proved the big difference between the teams.

I'm not glamorising or reveling in the immense hit Danny Beck delivered to an unsuspecting Paul Keaney just after halftime, the sickening sound reverberating around Avantcard Pairc Sean Mac Diarmada, provoking a visceral recoil in all who heard it - the sound magnified by the fact that the county ground wasn't anywhere near full capacity.

The hit sickened young Keaney and delivered what seemed like an electric jolt to Beck's Mohill teammates, inspiring them as they were transformed from a team unable to get a grip at midfield into an outfit who would not let the ball past the middle of the field for the next quarter of an hour.

As moments go, I struggle to think of a more transformative incident than what we witnessed last Sunday. Gary Hickey's wonder strike that sent Glencar/Manor into the 2008 Senior Final at the expense of St Mary's could also be described as the shot heard round the world, ushering in an era of Glencar/Manorhamilton domination.

But should it have been the hit that ended Mohill's challenge?

Now, I suppose if you're a Mohill supporter, you'd call it a ferocious hit, perfectly timed but imagine, still that same Mohill supporter, had Beck or one his teammates been on the other end of the same  challenge?

The incident  reminded me of Kevin McManamon  levelling Peter Crowley in the 2016 Final late on with a point between the teams, Dublin turning over the ball and going down the field to score. At the time, everyone thought 'what a smashing hit' but replays afterwards meant even the most rabid Dublin fan would say the Dubs got away with one.

Did Beck get away with one?

Yeah, I think so but this is not to condemn Beck or take anything away from Mohill's superb victory, they were fully deserving winners but in the heat of the moment, this was the sort of moment that can define your season, it was that big!

We'll never know what might have happened if St Mary's had been awarded the free or if Danny had picked up a second yellow but when it came to the winning and losing of last Sunday's Final, there was no bigger moment.

Spare a thought too  for  Paul Keaney. The St Mary's youngster has been one of the stories of the championship and the way Mohill targeted him , two Mohill players picked up yellow cards for challenges in the first ten minutes for heavy hits on the  midfielder, is a compliment of sorts, although I suppose Paul will feel he can do without those sort of compliments.

Undoubtedly shook and winded by the hit, Keaney literally picked himself up off the ground and contributed to St Mary's attempted fightback late in the second half. Got to say that showed guts too.

In fairness, nobody in the St Mary's camp were complaining too much about the incident, freely acknowledging that the better team had won on the day but rarely has one incident sparked the sort of transformation we witnessed during the third quarter last Sunday afternoon.

That transformation was simply incredible as Mohill bossed every sector of the field and powered through a St Mary's team who looked as if they were caught in a whirlwind. By the time the water break came, Mohill were out of sight but credit St Mary's came battling their way back into the final - not easy to stop a runaway train when every instinct is shouting at you to surrender.

Mohill look well poised to retain their crown but you wonder how they would fare without Beck or Ronan Kennedy. We've already discussed Beck's impact, literally, on the game but when St Mary's cut the gap back to just three points with eight minutes left, Kennedy conjured up a wonder point to kill the comeback stone dead.

Would Mohill have won without the evergreen duo? Maybe, maybe not but when you have leadership like that, it is an easier job.

A big day too for Keith Beirne, winner of Man of the Match, as he delivered big time on the big stage. With nearly every Mohill attack focussed on freeing their sharpshooter, Beirne worked his socks off to put himself in space - not an easy task with the St Mary's defence hunting you!

Considering the margin at the end was five points and Beirne hit eight, easy to see how important he is to Mohill. Hopefully, he can carry that form into Leitrim's campaign later this year.

For St Mary's, there is a lot of hurt right now but all they lack is the physical development that Mohill have honed through the years. With more and more good players coming year after year, they are well placed for the years ahead if they learn the right lessons from their defeat.

What the Carrick men need  is an out and out forward who can strike the fear of God into opposing defences. Develop that and build up their physical conditioning and it won't be long before St Mary's are lifting the Fenagh Cup again. The return of Micheal McWeeney would be huge too!

Finally, congratulations to Mohill on a well deserved victory. When the game was there to be won, they showed their class and it is fair to say from day one, they have been the most consistent of all the teams. When questions were asked of them, they answered in style and in one of the best championships I've ever witnessed, they have been head and shoulders above all comers.