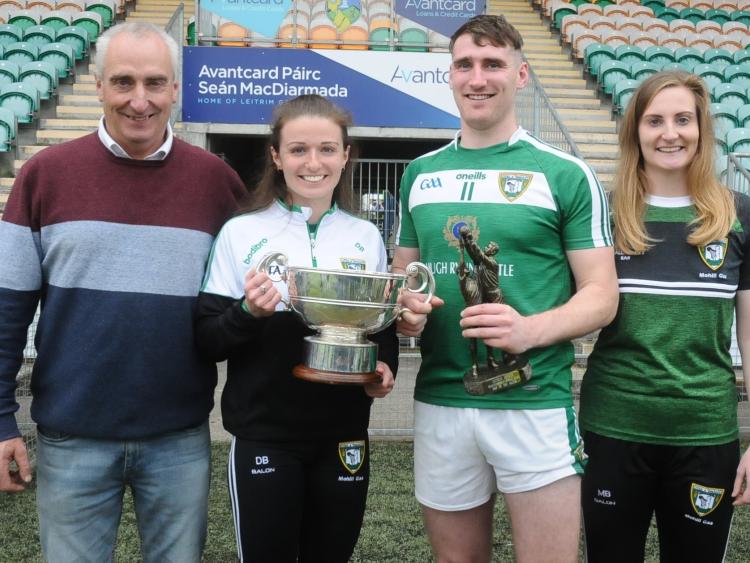 Man of the Match Keith Beirne pictured with his father Michael and sisters Dearbhaile and Michelle Picture: Willie Donnellan

Embracing the pressure of a County Final is one thing but when an entire town is telling you that you have to match the Player of the Match award your sister won the previous week, you can understand why Keith Beirne was a happy and relieved man last Sunday, writes John Connolly.

Asked if he was under pressure to emulate his sister Dearbhaile who won Player of the Match in the Ladies Intermediate Final, Man of the Match Keith laughingly said “There was a lot of slagging in the house this week, she was nipping at me that you have to perform, the pressure is on.”

The slagging wasn’t confined to the Beirne household either: “A lot of people said it to me at Dearbhaile’s game, oh big pressure, repeat that. I was a bit nervous coming in but I got going anyway.”

Taking each game as it comes seems to be working for Keith as even a cracking shot rebounding off the St Mary’s crossbar didn’t put him off his game: “All you can do is smile there and laugh, it is nearly not your day when that happens but these things happen in sport. You just have to go again so I dusted it off, kicked two scores straight away thankfully.”

Neither was the man of the match surprised by the St Mary’s challenge: “We knew coming in that the Carrick team was good, we played them in the League final and we got away in the last few minutes.

“In the championship, they fell apart a bit at the start but they came back, took out big teams, bigger teams than us at the time nearly, so we knew they were going to put it up to us and they did but just the small bit of experience near the end caught them.”

Mohill regained the title after two disappointing campaigns: “We were reeling the last few years, Since 2017, we haven’t been right as a team. We know that there are championships in us, we have young lads there who have never won it.

“We played an A v B game there three weeks ago and there were lads playing on the B team performing streets ahead of lads on the A team so it is really looking good for Mohill’s future.”

Final question, will Mohill be able to celebrate their triumph? “We’ll work something out, I’m sure” was the succinct answer.