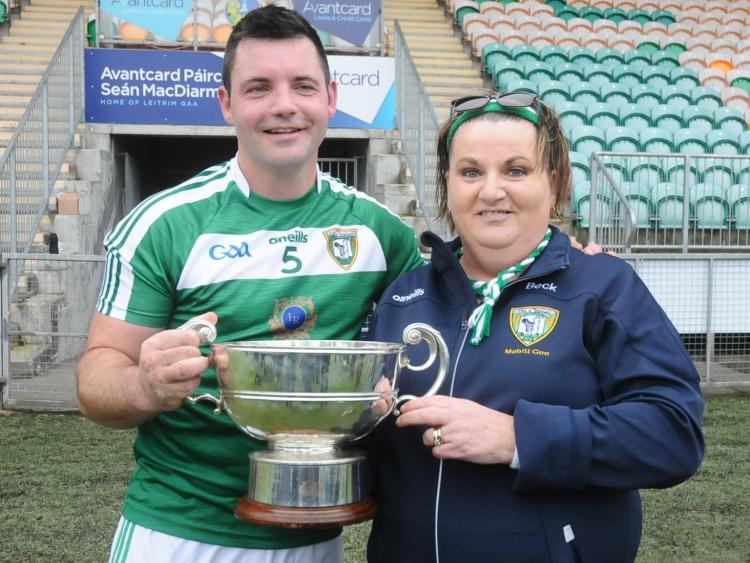 Some may look at a fourth senior championship medal 14 years after the first and think it might be time to hang up the boots but not Mohill captain Danny Beck who stated unequivocally that “I'll always be available for Mohill.”

Asked about his  future, Danny, who has led Mohill to three Senior titles, admitted the thought had crossed his own mind a few times: “After a few of the games this year where I was overrun, I was thinking to myself that I might be holding some of the younger lads back but I’ll always be available to Mohill, I’m going nowhere yet. Not tonight anyhow!”

It might be his fourth title but the delight at winning was as fresh as the first title 14 years ago: “Delighted, over the moon, we knew when we were coming here that Carrick would be up for it, the minute we walked in, we could see they were togged out and ready to go. We just had to hammer into the lads to stay focussed and thank god they did.”

St Mary’s really put it up to Mohill in the first half and Danny agreed that it took Mohill until halftime to figure them out: “Our game is free flowing running, direct running and Carrick just filtered into the channels we normally run into. Look, it took us a while to adapt to it, we got there in the end and it is important that when we do get on top of teams, we punish them.

“You saw Keith’s shot in the first half, your saying to yourself is it going to be one of them days, they go up and get a point after that. Keep knocking on the door and eventually you get through.

“This year, we started games I suppose very slow, nearly sizing things up, seeing what way they’re going to go and trying to break them down. It started against Fenagh, Fenagh got a goal and then we clicked, we blitzed them before halftime.”

The Mohill blitz didn’t arrive until after the halftime break this year and Danny put it down to a change in approach: “We did what Carrick has been doing to teams, we sucked them in and the minute they take that play, we’ll put our hand in and get it.

“But we still conceded seven frees in the first half so we mentioned it at halftime and worked on that. There has to be a winner and thank God it was us. We’re delighted, that’s all I can say.”

Many pointed to Danny’s shuddering challenge on Paul Keaney as a pivotal moment and the Mohill captain admitted he wanted to lay down a marker: “There was an awful lot of talk about the Carrick midfield before the game and the two of them were doing really well in the first half. Look, your body can only take a few of them hits so you hit hard and fair and eventually you’re going to slow them down. Thank God I did and thank God, I got the ball.”

The small crowd, talk of lockdowns and Covid-19 meant this year’s Final was played in quite a different atmosphere, causing Danny to quip “You could hear my mother anyhow, wouldn’t you!”

“There probably has never been as many eyes on a championship final in Leitrim as there was this year with online viewing as this year. Credit has to go to Leitrim GAA for the way it was handled.”

The long serving defender believes Mohill can defend the title next year: “We have the talent to go on defend the title. These lads were chomping at the bit last November and then Covid came in but that final against Aughawillan two years ago and that semi-final loss to Ballinamore last year is what is driving lads this year.

“We did not turn up in  those games and I always say when Mohill turns up, we’re hard stopped but when we don’t turn up, we’re very, very average and anyone can take us. We just have to make sure that we’re right every single day.”

Finishing off, Danny hoped that with Covid-19, everyone would be sensible during Mohill’s celebrations: “Nobody wants to be doing anything stupid, we don’t want to spoil a good weekend, just a bit of common sense really.”