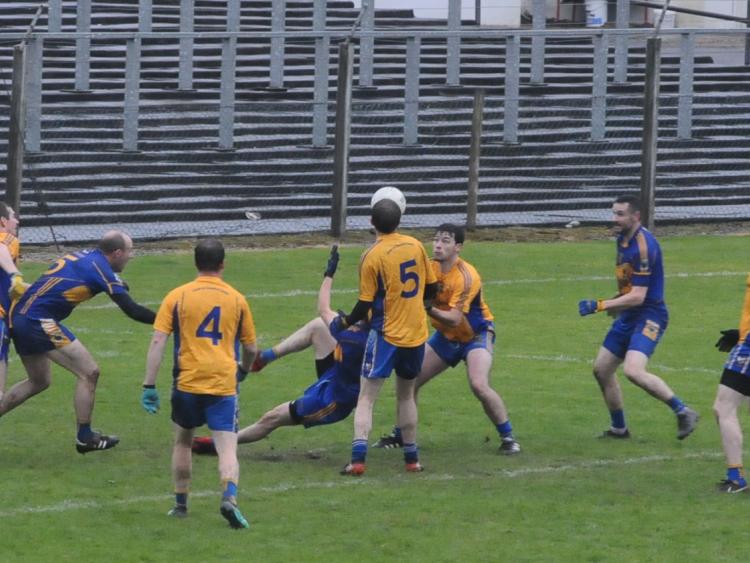 Action from Sunday's Vistamed Junior A Semi-Final between Cloone and Glencar/Manor. Next Sunday's Final has been postponed indefinitely Picture: Willie Donnellan

Leitrim GAA plans to finish off their club season next weekend have been thrown into disarray after the GAA’s Management Committee in Croke Park has endorsed a decision to suspend all GAA Club games ​at all levels with immediate effect ​and until further notice on Monday afternoon.

The first game to fall was a Barna Waste U13 Championship Division 2A Final between St Joseph's and Allen Gaels which was moved from next weekend to tonight (Monday) in Cloone specifically so that the game could be played ahead of any new restrictions imposed by the Government amidst mounting concerns over Covid-19.

The decision also means that next Saturday's Smith Monumentals Intermediate Championship Final between Annaduff and Gortletteragh and Sunday's Vistamed Junior A & B Finals involving Aughavas & Cloone and Mohill & Allen Gaels have all been called off.

No decision has been made yet on Glencar/Manorhamilton's Connacht Ladies Intermediate Championship Final against Geevagh, scheduled for Sunday in Shane McGettigan Park, will go ahead as the LGFA are a separate body but one would imagine the game will not go ahead.

Speaking to the Leitrim Observer, Leitrim GAA County Board Chairman Enda Stenson said that the news was "terribly disappointing. We have done everything we could to have the game's programme completed as quickly as we could but unfortunately, we ran out of time.

"I am very disappointed for the four clubs whose first teams were due to contest Finals next weekend, Annaduff and Gortletteragh in the Intermediate and Aughavas & Cloone in the Junior but there is nothing we can do."

The GAA statement highlighted how a number of incidents involving post match celebrations had impacted on their decision to call a halt to all club games but stressed that, depending on the guidelines as outlined by the Government and the Northern Ireland Executive, that training could continue for county teams subject to guidelines.

The GAA statement read: "The decision has been taken in the interest of public safety following a number of incidents that have been brought to our attention in recent days. ​In particular, post-match celebrations and a lack of social distancing at certain events have proved disappointing and problematic.

"This directive applies to all ages and all grades across the island.

​"Training will continue to be permitted as per the guidelines outlined for the relevant levels in the Government's National Framework for Living with Covid-19 and relevant guidelines in the Six Counties.

"The GAA will continue to monitor the situation in the ​coming days and weeks, regarding changes in government guidelines, before liaising with our units accordingly.

"The Association would also like to acknowledge all of those units who have worked diligently in complying with the public health advice around the staging of our games and training sessions since activity resumed.

"More than ever, we ask that you continue with this approach where training sessions for your players is continuing."