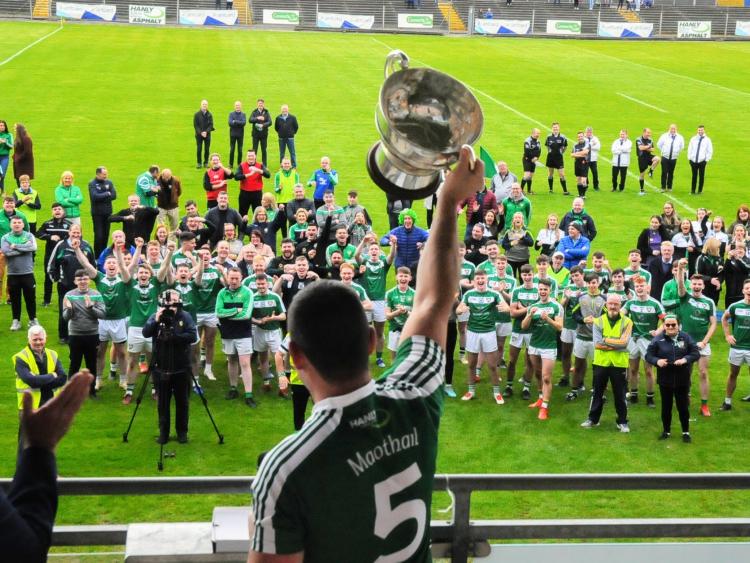 Rarely do you witness a sporting body apparently lose the rag with its own members: after all, it is not the political thing to do. But I reckon we saw just that on Monday when the GAA pulled the plug on the club season across the entire country. And after witnessing what's being going on over the last few weeks, I'm not sure I'd blame them!

The tone of the GAA  statement, the surprise that one of the country's major sporting bodies was unilaterally taking such drastic action speaks of a governing body who seem to have lost patience with what can only be described as the willful disobedience of their own membership!

There are victims - the footballers of Annaduff and Gortletteragh were preparing for their refixed Intermediate  final next Saturday while Aughavas and Cloone were happily looking forward to a derby clash in the Vistamed Junior A decider next Sunday afternoon.

And what about Glencar/Manor ladies, their dreams of Connacht glory scuppered and, for some of the school going members of the team, the second time this year a Final has been snatched away from them by Covid restrictions, following on their All-Ireland Senior C Final in March.

Dealing with the Covid-19 pandemic is not a uniquely GAA problem, it has affected local soccer to a huge degree with all local games at adult and juvenile level being called off until further notice while groups as diverse as basketball, a truly indoor sport, and athletics, primarily an outdoor activity, both struggling to put together feasible structures so that they can continue their activities.

But the GAA is the lightning rod for much of this country and I'm sure the officials in Croke Park must have been tearing their hair out after the events of last weekend in particular.

I know this because we in the Observer, like I'm sure other print media across the country, got a request on Friday evening from Croke Park to refrain from taking team pictures at finals and from encouraging victorious players to form groups for the traditional post match celebrations photos.

That particular photo is like gold-dust for any local paper. The celebrations pictures are part and parcel of County Final day as much as any captain's victory speech. We already published those photos of Mohill's victory in the Senior grade and of the various winning Ladies teams in weeks gone by, just like any other paper across the country.

But we took on board the GAA request for one very simple reason - for the good of everyone's health!

Because, unless this damned virus is very picky and doesn't attend GAA games, those photos could quite conceivably lead to some poor unfortunate soul becoming seriously ill or even losing their life.

That request, or to give it it's proper title of a directive, went out to every club in the county before last weekend's games but Leitrim GAA, like Croke Park before them, got more or less the same reaction - they were ignored!

I was at three Finals on Saturday and, at at least two of them, saw clubs organise their own photos of their underage teams in breach of the request while James Molloy, our photographer at the hurling final, was on the unfortunate end of a tirade from a well known supporter when James refused to take photos of the celebrating Carrick players out on the field.

(To address that incident in particular, all I can say is that we're all responsible for our own actions and James Molloy's first and only responsibility, like any photographer or reporter attending any game, is to protect his own health and not to risk his or anyone else's life for a fleeting moment of celebration).

This comes, of course, after weeks of Willie Donnellan getting flak when the Observer published online galleries of photos from club games across the county showing no social distancing, no mask wearing and no crowd limits.

But apparently, the problem there was actually publishing the photos, not people risking their life and the lives of others by not obeying a few simple guidelines.

The GAA and their members quite rightly got huge kudos left, right and centre earlier this year with their wonderful community, orientated  response to the Covid lockdown, their immense outreach work to the local community and the responsible way they handled the entire crisis, some even going so far as to say that the GAA were more responsible and more prudent that the Government in lifting restrictions!

Unfortunately, a lot of that goodwill has been washed away in a torrent of post-match celebrations and, if I were to be cynical, all the talk of high-minded ideals of a community organisation first and foremost is just talk, that when push came to shove, winning and celebrating winning is what matters most, it seems, to the majority of true Gaels!

The reaction to the scenes that followed Dungannon's penalty shoot-out win in the Tyrone Final was dismissed as begrudgery from Arlene Foster and her Unionist cohorts and perhaps there was an element of that to it, but look at the Covid figures in Northern Ireland right now.

We're far from above reproach here in this county as there have been victory parades, mass gatherings and we've heard tales of multiple players and supporters drinking out of the same Cup! Stranger still, we've heard of supporters from neighbouring clubs travelling to join in celebrations that simply should not have happened.

One dreads to think of what the Leitrim Covid numbers might be like in the coming weeks.

Look, it is not my intention to scold, nobody likes it, I don't particularly like getting blasted for something I've written and, as I've said before in a few columns, I'm not whiter than white. But I've got to say I've lost patience with the apparent recklessness that some in our communities are adopting.

Who in their right mind organises a victory parade through the local community as Blackrock did after winning the Senior Hurling championship  in Cork?

Or worse, what player takes a Covid test, plays a final and then finds out they are Covid positive as a player in Dungarvan did last weekend. But worse still, it emerged afterwards that the Club did in fact know that the player had undergone a Covid test but played him anyway and kept him away from the post-match celebrations!

We can blame the GAA and those faceless bureaucrats in Croke Park for lots of things but we can't blame them for this. When the games came back last July, we all talked piously about following the guidelines but they were soon completely flaunted with some games attracting double or even treble the 200 person capacity limit set by the authorities.

We'll miss the club games but it should come as no surprise that they've been called off. One only has to have eyes to know that!