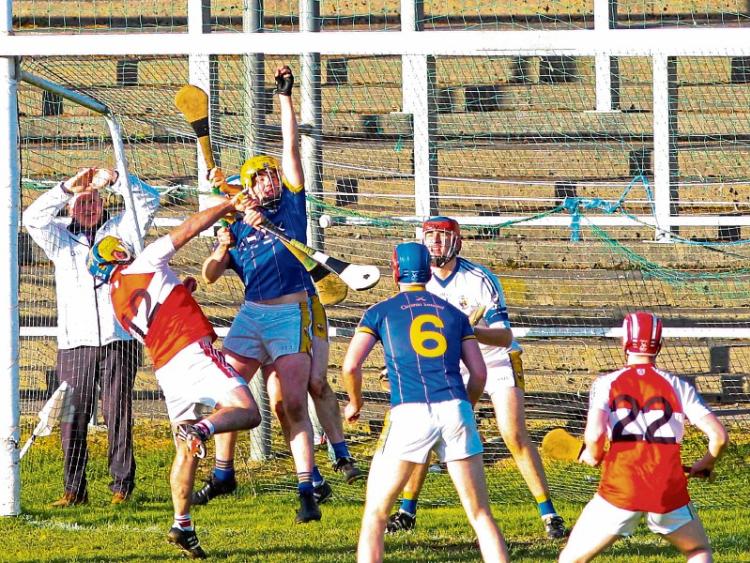 Cluainin hurlers must be wondering what exactly they need to do to regain the Leitrim Senior Hurling Championship title as, for the second year in a row, Carrick-on-Shannon performed their version of the Late Late Show to grab victory from defeat.

For the second year in a row extra time was required to decide the outcome of the county hurling decider as Carrick claimed their 33rd Leitrim title, as well as their fourth-in-a-row, while luck again deserted Cluainín as they got pipped at the post as happened a year ago.

The standard of hurling was generally high on an excellent pitch in near ideal weather conditions. It was nip and tuck in the first half after which Carrick emerged with a minimum margin interval lead.

With Cluainín appearing to be heading for victory as full-time beckoned Carrick nabbed a late goal that James Glancy hammered home from a 13metres free to force extra time.

The even Stephen nature of the battle continued in extra time and it appeared near the end that a ‘65s’ shootout might be needed to get a winner. But that wasn’t necessary when Stephen Goldrick 60+ metres free sailed into crowded Cluainín goalmouth and Jamie Ward flicked the sliothar to the North Leitrim men’s net.

Liam Moreton and Sean O’Riordan with points apiece put Carrick 0 – 2 in the opening five minutes. But Karl McDermott and Gavin O’Hagan hit similar scores to put Cluainín on level by the 12th minute.

Over the next 14 minutes Carrick edged ahead again thanks to Jamie Ward and Conor Beirne who both shot over. Karl McDermott and Gavin O’Hagan made it a stalemate situation once more by the 29th minute with Cluainín points each.

An O’Hagan free conversion put Cluainín ahead for the first time in the game shortly afterwards. But Carrick got level and then went in front with points from Jamie Ward and Conor Beirne to lead by 0-6 to 0-5 at halftime.

Liam Moreton increased Carrick’s lead with a point after the restart. But Cluainín was back in front by the 38th minute after Gavin O’Hagan, Declan Ryan, and O’Hagan (free) again, pointed.

A Sean O’Riordan free conversion put Carrick on level terms a minute later. Cluainín surged to go four up by the 47th minute thanks to two Gavin O’Hagan free conversions, plus a Michael O’Brien long range free tap over and a Declan Ryan point.

Two minutes later it was still a Cluainín minimum lead situation after Declan Ryan and James McNabola traded points. Then Peter Poniard and Gavin O’Hagan (free) with points each put Cluainín three points up on the 60minute mark.

James Glancy answered with a goal from a 13metres free four minutes later to send the game to extra time.

In the first period of extra time Gavin O’Hagan fired over twice for Cluainín but Liam Phelan and Cian Mallon answered with a Carrick point apiece.

An O’Hagan free conversion sent Cluainín in with an extra time 0-18 to 1-14 interval lead.

Cluainín were reduced to 14 players shortly after the restart of the final period of extra time when Paddy Clancy was shown red.

Then a Liam Phelan 76th minute free tap over levelled matters. It was some eight minutes later when Stephen Goldrick’s long range free into the Cluainín goalmouth was flick to the net by Jamie Ward to give Carrick a magical late winner.