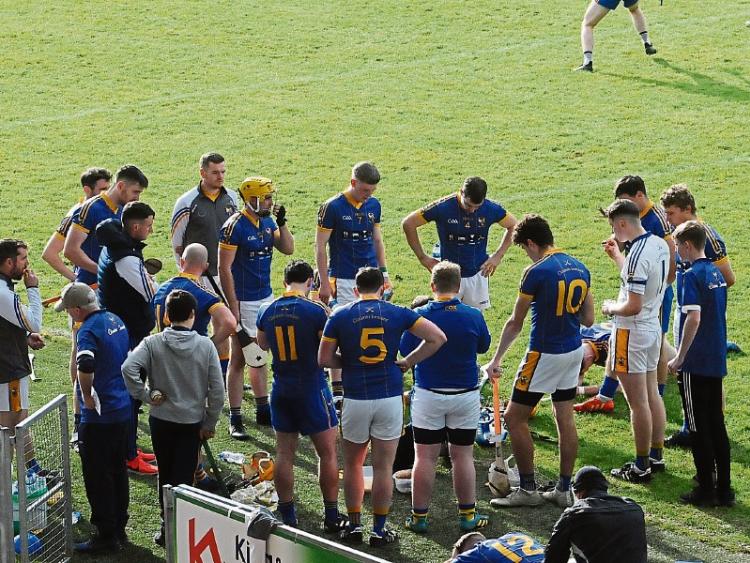 The Cluainin Iomaint players pictured getting some advice during the water break Picture: James Molloy

After the dramatic late loss to Carrick in last Sunday's Leitrim Senior Hurling Championship Final, a disappointed Cluainín boss Mark Boyle would be forgiven for thinking this was “Groundhog Day”.

Carrick prevailed in last Saturday's final after extra-time, just like they did last year and a devastated Mark said “I feel it is like Groundhog Day. Like last year it was extra time again. A moral victory is no good to us. You can see how gutted the lads are.”

Indeed, the manner of the defeat after his Cluainin charges had dominated most of the contest left Mark questioning just why he remains involved!

“All the effort put in in the last few months. Fair play to Carrick; they got the rub of the green with the very last score,” said Mark, “ It was just a cruel way to lose a game; we just kept going; what can we do? Like last year we were on top in the second half – I think we were ahead by four points at one stage and we were on top in extra time.

“We just didn’t push it on. Carrick like they did last year were able to find that goal – the killer punch to us away. Against a team like Carrick’s quality you need to be able do that – you need to drive it on.

“We lifted it again in extra time – we said were going to take it in five-minute spells and go for it and we did that. I really thought that today was going to be our day; unfortunately, that’s it.”

The manager refused to attribute any blame to any of his players for conceding the late goals that gifted the title to Carrick: “There were tired bodies out there – these lads had played 80 minutes plus of hurling – you can switch off and in a second it is all over; that’s hurling, that’s sport. I find it hard to talk but we will think about it.”