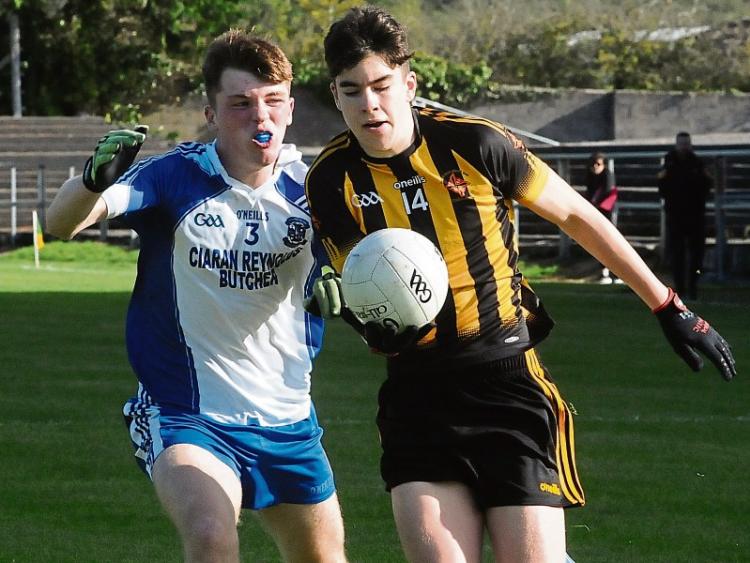 The rising tide of St Mary's Kiltoghert continued last Saturday morning in Avantcard Pairc Sean Mac Diarmada as their U15 footballers eventually swept aside the dogged and determined challenge of Mac Diarmada Gaels.

The Ballinamore Sean O'Heslins & Kiltubrid outfit took this game to the Carrick men, they fought for everything and never laid down but they just couldn't match the outrageous scoring power and skills of a supremely talented St Mary's outfit.

What makes this scary is the vast majority of this Carrick team are underage next year as St Mary's are producing a real conveyor belt of talent.

There is talent too in Mac Diarmada Gaels married with probably a more advanced team physically but when push came to shove, the overall strength and ball skills of the winners proved just too much for them to handle.

Every time Mac Diarmada Gaels made a big push to close the gap and close it they did, St Mary's responded like a boxer coming off the ropes, hitting the Gaels deadly blows they were not able to counter.

St Mary’s started brightly and Mac Diarmada Gaels needed a vital block to stop Cian Reynolds from scoring. Josh Maye tapped over two points, one from a free, with Cathal McCarthy replied from a good move, chipping over the bar on three minutes.

But from that kickout, St Mary’s goaled when a long ball into Diarmuid O’Connell was spilled and the big full-forward tapped the ball home. O’Connell drove a shot into the side netting but great work from Dean Earley set up Cian Reynolds for a point in six minutes.

Emmet Doran broke up a Gaels attack and started a move that ended with Cian Reynolds setting up Maye for an eighth minute goal. Darragh Gardiner added a point as a rampant St Mary’s led 2-4 to 0-1 after just ten minutes.

Mac Diarmada Gaels gave them some hope when Karl Winters went on a long run, slipping as he shot but his long range effort flew into the far corner for a vital goal. Gaels keeper Darragh Lee also made a good save from Brian Keaney while he did well to hold a Darragh Holmes shot on the line.

Paul Honeyman added a point after a poor clearance before McCarthy and Maye swapped frees. St Mary’s surged clear again when Brian Keaney drove a great shot to the net after a high ball broke kindly for him, the same player quickly adding a point.

Paul Honeyman pulled back a point before Keaney saw a shot blocked and a point score but a great shot from about 30 yards from Gavin Darcy flew right to the net to give Mac Diarmada Gaels a lifeline at the break, St Mary’s lead 3-8 to 2-4.

St Mary’s started quickly in the second half, points from Maye (free) and Ben Guckian quickly followed by a fisted O’Connell goal on five minutes.

That actually prompted Mac Diarmada Gaels best spell as they hit an unanswered 1-4 to go from 11 points down to just four in six minutes. Karl Winters fired over three points, Gavin Darcy one before Paul Honeyman showed quick thinking to take a free move right in front of the goal before St Mary’s got their defence back in place.

St Mary’s response was devastating: Josh Maye hit 1-1 in the next two minutes while there were three points from Jack Deegan, Maye and Ben Guckian to stretch the lead back to 11 points in just five minutes. Sub Harry Farrell pulled back a point on 20 minutes for the Gaels.

But from then on, St Mary’s dominated with O’Connell getting his hattrick when a Guckian shot rattled off the crossbar and he forced home. Guckian and Jack Deegan added a free each as St Mary’s ran out 16 point winners.