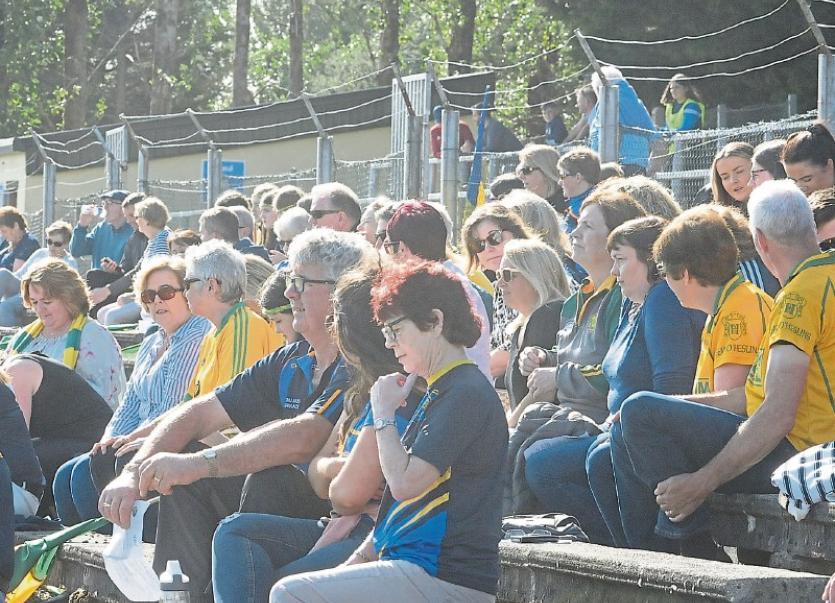 In this business, you cannot make everyone happy. Sometimes you make nobody happy, sometimes you wonder if people read your column at all but it all goes with the territory as they say.

Last week’s THE LAST POINT column drew a bit of reaction and one reader took the time to ask a few questions on Facebook after reading the column “Hard to fault GAA stance after so many flouted regulations.”

Having taken the time to write such a lengthy missive, I thought it only fair I’d respond this week but this week's column, as you can see on the opposite page, was already done and dusted.

But I felt that this reader deserved a reply. I’ve included the post but not the name, it is there on our Facebook page if you want to see it, but dealing with Covid and the issues involved isn’t a personal issue - although I suppose I could argue that it is very personal as this disease has the capacity to effect each and every one of us very personally.

Anyway, here is the post, unedited and in full:

“John do u stand by the GAA continuing with county football where they are asking our footballers to come from all corners of this country to train and worse still to go to play games in epic centres of this disease.

Where is the reasoning in this? Where is them doing the right thing to help fight this disease for our country?

So you are worried about taking a photograph of a winning team who are from the one parish and playing football together for the last few months and yet you stand by the GAA allowing the championship to continue.

Why if they are so worried about the welfare of their membership have they not pulled the plug on all its games?

An All Ireland at any cost even if lives are at stake.

I love football as much as anyone else but I hate hypocrisy and making rules to suit themselves and putting blame on the local footballer and the local spectator.

I was at the ladies senior football final where there was only 200 allowed into the ground in Parc Sean but with this big expansive stadium we were only allowed sit in one section of the ground.

When people asked to go and sit in the big stand they were told no way, both sets of fans had to sit in the one area. Who made that rule?.

John can u answer me this question why did the GAA pull the plug on the last few games of club football and think its OK to allow County championship to go ahead when we are in level 3 and only allowed to travel within our own county?

When did a game of football become essential travel?

I would love you to put that question to the GAA headquarters why they are allowing this to happen in your next article.”

Quite a lot of questions in there and you could nit pick every point, make it personal and go on the attack but that's not fair to someone asking genuine questions.

First of all, I don't know where I stand in relation to county games going ahead.

As a sport journalist and GAA fan, I'm delighted some sport is being played and I'm looking forward to games.

But as an ordinary Joe Soap with a sister and brother working on the frontline and family members with serious medical conditions, I'm worried more than you can imagine and really do wonder about the wisdom of staging these games!

Then again, I felt that way when the club games were going on and few seemed to be paying any attention to the guidelines for combating the disease. And that is the issue and the subject of last week's column.

My point about team photographs is that the GAA is desperately trying to limit occasions when the disease could be spread but their own clubs were the ones flouting those guidelines. And if we can help minimise the spread of Covid-19, shouldn't we do it - even something as simple as not taking a team photograph? Isn't it the right and sensible thing to do?

As far as the GAA, or the LGFA for that matter go, I'm not a member of either organisation or a spokesman but to claim that money is at the heart of their decision to stage county games is wrong, pure and simple.

It will cost the GAA money they probably don't have to hold these competitions, Croke Park are already directly paying the travelling expenses of teams while the absence of crowds hurts their revenue hugely.

Yes, games will be shown on TV and streamed online but at €5 a game online, it will actually save people money. No travel, food or drink expenses and for €5, an entire family can watch the game. Hardly a money grabbing exercise.

As for our writers' experience at the Ladies Final, my understanding is that all County Boards were instructed that open air seating was a safer option than covered stands in terms of spreading the virus.

Can the Leitrim County Board be then blamed when fans insist on sitting together? I'm not sure they can - Pairc Sean can accommodate up to 12,000 spectators, the McGovern Stand about 2,700 so there was lots and lots of room for spectators to safely distance themselves from their fellow fans at all our finals.

As to why the GAA pulled the plug on club games but are going ahead with county, well that's easy, it is far easier to control what happens at a county game - no spectators, far fewer numbers involved and much easier to manage. Its logical, whether it is right is a different question altogether.

An anecdote from a recent County Final in Ulster where 31 members of a 33 strong panel who won their final were later diagnosed with Covid-19. The two squad members who did not test positive did not attend the post-match celebrations. If you think that's a one-off, there is firm evidence that some of the big outbreaks around the country can be traced directly back to County Final celebrations.

So maybe, just maybe, the GAA decided that in removing the root cause, ie the club finals, you might just remove the cause of these outbreaks. And for that, they should be applauded.

I'd have loved if our club programme was completed but the point is that we are all responsible for fighting this disease - so maybe if we all act responsibly, we can get back to enjoying our club games in a safe environment.

And that can only be good for one and all.