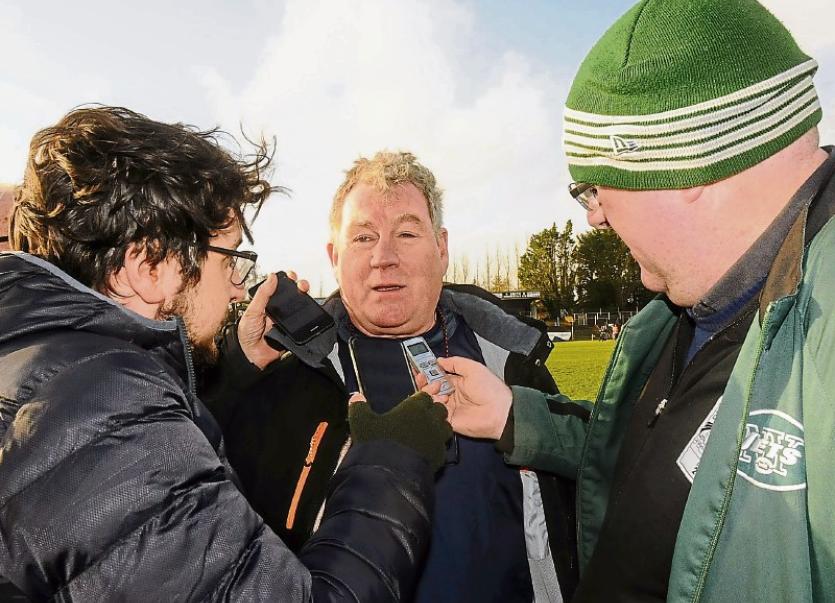 Leitrim manager Terry Hyland is interviewed by the media after one of the games in the Allianz NFL Division 3 campaign earlier this year Picture: Willie Donnellan

Preparing a County team is not an easy business. Organising 30 plus players, a myriad of team officials, coordinating transport to and from training, let alone matches, nutrition, strength & conditioning to say nothing of injuries and their treatment.

Preparing a team in the middle of a worldwide pandemic with restrictions on movement, games and even good old human contact is another story altogether as Leitrim head to Newry next Saturday, October 17, for the resumption of the Allianz NFL Division 3 campaign.

Is it any wonder Terry Hyland simply does not know what to expect when Leitrim take to the field in Pairc Esler: “If I was being honest, are we going well enough? Probably not. Is everyone else in the same boat? They are probably are.

“But it has been the same in other counties, it is just the way it is and we just have to hope that we are where we should be. It is not the ideal preparation. As I’ve said on many occasions, if Leitrim had handed me the job six weeks ago and said, 'now Terry, have them ready to play a game in five weeks', if I said yes, they’d have said ‘you’re crazy’.”

Discussions about his sanity aside, Terry reveals that there will be few enough new faces in the Leitrim panel: “We didn’t really go down the road of bringing in new guys that we didn’t have before. Most of the guys who had improved, the likes of a Paul Keaney and Tom Prior, we were having a look at them earlier in the Spring and brought them in but bar them, to be fair to everybody, time was against us.

“We only had four weeks to prepare, the County Final wasn’t played until the end of the month so we didn’t have everyone available until the last ten days before the game. We’re always looking at players, it is not as if it is an open or closed panel, the timing of these things is probably an issue.

“Conor Dolan is in, he wasn’t in during the Spring, they would have all been invited in before but for various reasons, they couldn’t make it at the time.”

Terry mightn’t have had access to his players during the summer of club action but that’s not to say that the Leitrim management team were not watching closely: “To be fair, we had our players on GPS when they were playing with their clubs so we could monitor what they were at.

“Would we have liked to have seen them at maybe a little higher level when they were coming back? Of course we would but you could ask that question of any manager and they’d always tell you they’d like to see them a little bit better but it is what it is. We’re lucky in regards that we have no major, major injuries, that is the major side of things.”

Preparing for Down comes with a new set of challenges with restrictions on indoor gatherings affecting the normal video analysis of the opposition: “It is a challenge, analysis has become such a major part of the inter-county scene over the last number of years. We haven’t been indoors, we haven’t had any indoor sessions and we’re not even doing the likes of that because of the restrictions over using indoors.

“People have become so used to learning by visual presentation and showing them on tape or whatever sort of format you want to use, what you want them to do and how you want them to do it. We would have eased up on the likes of that because you can’t get them into a room and I’m sure everybody else is the same.

“We have all these WhatsApp groups and everything else, you can send information and all that. But to be honest with you, I prefer to stand up, talk to lads and get feedback. It is fine giving out information if you are not getting feedback there and then.”

So even asking the usual question of whether Terry is confident heading across to Newry is somewhat redundant? “That’s just it but as I said to you, we just have to wait and see how we go. It will have been up to the individuals about how they kept themselves prepped over the Summer and some may be in better shape than other places but it is what it is.”