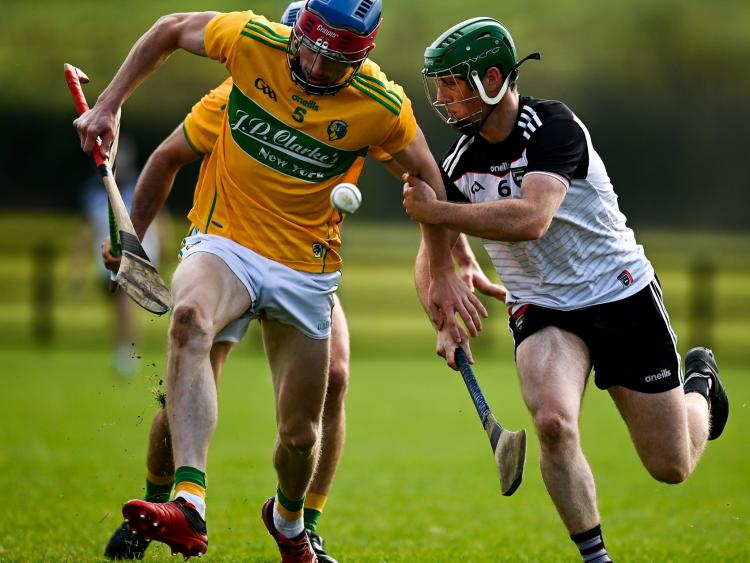 The heart was willing, oh so willing but unfortunately for Leitrim hurlers, the flesh was weak as a fitter Sligo finished this pulsating Allianz NHL Division 3B Final at the Connacht Centre of Excellence with an unanswered 1-6 over the final ten minutes of the contest to seal victory.

The superior fitness of the Yeats men along with a much greater impact from their bench told over the final ten minutes as Leitrim visibly tired after opening up a five point lead after a magnificent Colm Moreton score with less than 14 minutes to go, the big Leitrim man making a catch before bulldozing a Sligo man out of his way to score a brilliant long range score.

You couldn't see Leitrim losing from there but the warning signs were already showing - the superb Gavin O'Hagan was showing signs of the injury he carried into the game as he slowed up dramatically while Leitrim's subs were not making the impact the Sligo replacements did.

Sligo used those replacements well - moving around some key men to flood the centre of the field and despite some fantastic backs to the wall play from David McGovern, Stephen Goldrick and Ben Murray, the Sligo tide became just too much for Leitrim to stem in the final minutes.

Sligo would have argued that they deserved the victory as they hit an incredible amount of wides over the 70 plus minutes but the fact is that Leitrim were more clinical side and well deserving of their lead until their legs betrayed them.

Gerard O'Kelly Lynch got Sligo off to a two start with two points inside the first two minutes, the second from a free that also earned Paul Lenehan a yellow card meaning he would have to walk a disciplinary tightrope after that.

Leitrim finally settled when the impressive Ben Murray scored a lovely effort from some 50 yards out on the wing and almost immediately, Gavin O'Hagan fired over a great point. O'Kelly Lynch responded with a nice point before keeper Michael O'Brien made two wonder saves, the first from a O'Kelly Lynch piledriver on 12 minutes.

The ball actually looped up and over the Leitrim keeper, leaving him disorientated and not knowing where the sliothar was but he managed to turn in time to block the follow up.

Gavin O'Hagan tapped over a free from near the sideline before a brilliant short free found James McNabola in space for a wondering score on 15 minutes as Leitrim took the lead for the first time. Unfortunately, it was not all good news for Olcan Conway's team as Karl McDermott was forced from the game with a recurrance of a hamstring injury, Peter Poniard coming on.

Leitrim were now creating chances with O'Hagan hitting a free wide and Conor Beirne kicking wide but the Green & Gold dramatically struck for a goal on 18 minutes.

Anyone who has seen Conor Beirne in action knows the Eslin man is simply incredible in the air and he produced a staggering leap to gather a McNabola long delivery into the goalmouth. When Beirne eventually hit ground, a quick pass found sub Poniard who cleverly hopped the sliothar off the ground on its way into the net.

O'Hagan put over a free but any Leitrim celebrations were cut short as Gerard O'Kelly Lynch held off a robust challenge and ran in to fire a low shot to the far corner, leaving just two points between the sides. Eoin Comerford fired over from inside his own half but Sligo were then rocked by a second Leitrim goal.

It was an Eslin produced goal too as James McNabola's long drive was diverted past the Sligo keeper by the stick of a flying Conor Beirne. Beirne then quickly added a fine point after a pass from Enda Moreton but the Yeatsmen hit back with points from Conor Hannify and a Gerard O'Kelly Lynch 65.

O'Hagan replied with a free but the pace of scoring was amazing with the last four minutes before the halftime whistle leading to four points, three for Sligo's Mikey Gordon, Tony O'Kelly Lynch and Finian Cawley with a huge Colm Moreton score from halfway in response.

That left Leitrim with a 2-9 to 1-9 halftime lead, a lead wiped out within the first two minutes on the resumption. Conor Griffin tapped over a point before Gerard O'Kelly Lynch simply bulled his way through a Leitrim defender and fired low to the net.

Instead of subduing Leitrim, it provoked a wonderful response with Conor Beirne tapping over after a poor Sligo clearance on five minutes. Gavin O'Hagan then fired over two in quick succession while Enda Moreton scored a huge effort on the run on eight minutes to put Leitrim three up.

Conor Beirne got a yellow for a careless pull, Sligo's Mikey Gordon got one for telling the referee how to do his job in quite loud terms.

Tony O'Kelly Lynch must have thought he had scored a goal ten minutes into the half when he unleashed a ferocious shot bound for the Leitrim net but keeper Michael O'Brien, flying through the air, somehow got his stick to the ball to divert it out for a 65, a truly miraculous save he had no right to make.

Gerard O'Kelly Lynch converted the resulting 65 but an O'Hagan free kept Leitrim a goal to the good on 47 minutes. Another O'Hagan point, a brilliant effort from the corner, increased the Leitrim lead before the water break. A wide from an O'Hagan didn't seem to matter when Colm Moreton made a great catch from a Leitrim puc-out, bulldozed his way through an attempted shoulder and scored from distance on 56 minutes.

Unfortunately for a wilting Leitrim, that was their last score although Sligo didn't initially look as if they could reel in the green & gold with some bad wides. A Tony O'Kelly Lynch free and a point from sub Michael Munnelly reduced the gap back to just a goal.

That lead was wiped out with just over six minutes of normal time left when Mark Hannify's strong run down the left wing saw him pass the sliothar inside and Sligo county footballer Gerard O'Kelly Lynch showed his footballing skills by kicking the ball to the net.

Leitrim had a chance to an instant response but a limping O'Hagan put the free wide while Enda Moreton also missed from distance shortly after. Sligo took the lead with a Mark Hannify score on 66 minutes before his fellow half-back Finian Cawley added another.

Sligo's Andrew Kilcullen cracked a shot off the Leitrim crossbar but the Yeatsmen made sure of victory with injury time points from Ronan Cox and Tony O'Kelly Lynch (free).