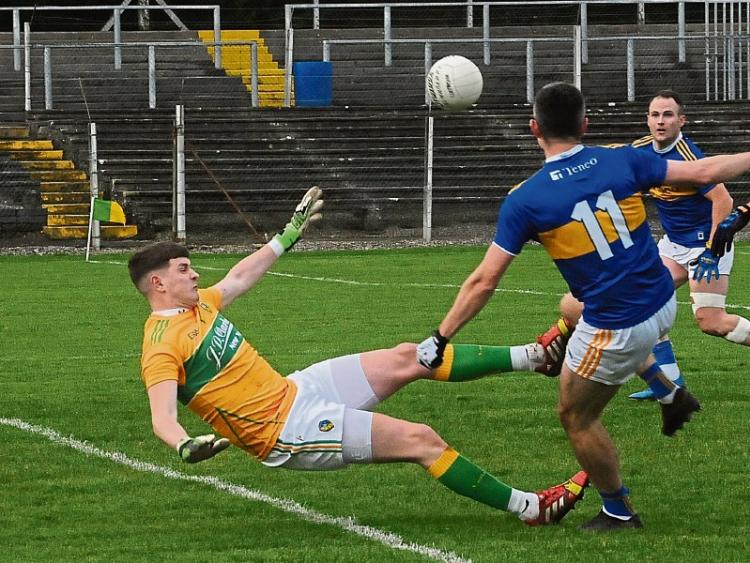 As the old saying goes, 'goals win games' and so it proved again last Sunday when two goals from the visitors Tipperary put paid to Leitrim's hopes of retaining their Division 3 status for 2021.

After a long hiatus, this was billed as a winner takes all encounter with the dreaded drop to the basement level of League football on the line and the Munster men did just enough to see off a determined challenge from the home side to claim the vital two points on offer.

Tipperary will not be overly enamoured with their performance going into the Munster Senior Championship next weekend against Clare while Leitrim face into the daunting prospect of hosting Mayo in the Connacht Championship on Sunday.

Tipp played well in patches but never took a firm hold on the game, allowing the home side to come back at them time and time again.

This led to an anxious ending until Tipperary midfielder Liam Casey broke through the heart of the Leitrim defence and planted the ball in the net to all but seal the win.

Tipperary played against the stiff breeze in the first half but it didn't seem to affect them in the early stages, building up a lead of 1-5 to 0-3 after 20 minutes.

The goal was a well worked move involving Robbie Kiely and Michael Quinlivan with the centre forward showing unbelievable vision to pick out corner forward Kevin O'Halloran to tap into an unguarded net.

Tipperary were employing their half forward line as extra defenders as Leitrim pushed on with the wind at their backs.

Early points for Keith Beirne and Ryan O'Rourke kept Leitrim in touch and Evan Comerford in the Tipperary goals had to be alert to keep out a drive from midfielder Mark Plunkett at the expense of a 45.

An early goal for Leitrim would have settled them into the match and despite a good point from the lively Darragh Rooney, it was Tipperary who struck for a goal by O'Halloran and they followed up with points from Jack Kennedy and Brian Fox to ease into a commanding five point lead.

However, Tipperary were unable to take a grip on the game and Leitrim's midfield pairing of the impressive Donal Wrynn and Mark Plunkett were dominating and the home side scored four unanswered points in the closing stages of the half.

Wrynn pulled off a couple of spectacular high catches as Tipperary struggled to get the ball up the field, all too often losing out by over elaborating or through a poorly placed pass.

To Leitrim's credit they hung in there and were rewarded with a string of points from placed balls from Keith Beirne as they tested the Tipperary rearguard.

Leading by a point at half time, 1-5 to 0-7 and with the wind at their backs for the second half it appeared Tipperary would push on and stretch out their lead.

However, Leitrim had other ideas. Mark Plunkett retired at half time to be replaced by Evan Sweeney. Sweeney slotted into the corner forward position with Domhnaill Flynn moving to midfield and Conor Dolan to the half forward line.

It paid immediate dividends with a high speculative ball from Keith Beirne coming back off the crossbar into the path of Dolan who popped it over the bar to tie up the game in the first minute of the second half.

Leitrim were keeping a close eye on Tipp's danger men Quinlivan and Conor Sweeney but when the former was fouled in the fifth minute of the half Jack Kennedy popped over the free to restore their one point advantage.

Quinlivan then followed up with a typically stylish point but Leitrim then took over, starting with a point saving block on Sweeney by full back Paddy Maguire.

Four points in a row from play followed for the Leitrim men in the next five minutes with Beirne, Shane Quinn, Dolan and Cillian McGloin all finding the range, making little of the windy conditions.

At this stage Leitrim were well on top, particularly in the middle third and Tipperary were finding it increasingly hard to work the ball out and connect with their forwards.

Substitute Liam Boland landed a huge free for Tipp but Donal Wrynn was in dominant form around the middle and was giving a demonstration in how to field a high ball.

Tipperary were really missing their giant midfielder Steven O'Brien who was out injured. It would have been an intriguing battle between the two big men.

A mistake then by Brian Fox allowed the lively Evan Sweeney in for a point to push Leitrim ahead by one but again Tipperary replied through a Conor Sweeney free.

Tipperary seemed to be running out of ideas and when the water break came both sides took the opportunity to freshen up their team with Niall Brady replacing Rooney on the Leitrim side and Colman Kennedy and Jason Lonergan going in for Conal Kennedy and O’Halloran.

Brian Fox lofted over a point for the visitors and the home side were then dealt a blow with Ryan O'Rourke having to leave the field injured following a heavy challenge that earned him a yellow card on the way off by referee Padraig Hughes.

Tipperary were kicking a few aimless wides which kept Leitrim very much in touch but a lack of penetration was costing them dearly.

Too often the Leitrim players would play the ball laterally across the half forward line, probing for a gap but lacking any meaningful penetration through the blue and gold ranks.

This inability to break through and get the all important goal proved costly as with 65 minutes on the clock when big midfielder Liam Casey linked with Kevin Fahey to carve open the Leitrim defence and dispatch a rocket to the net.

This was ultimately the difference and gave Tipperary the cushion they needed to close out the game.

Two late points for Leitrim came from the boots of Conor Dolan and Keith Beirne but Tipperary were comfortable in the closing minutes as the referee handed out black and yellow cards to both sides.

Leitrim now need to pick themselves up and re-group for a tilt at Mayo on Sunday.