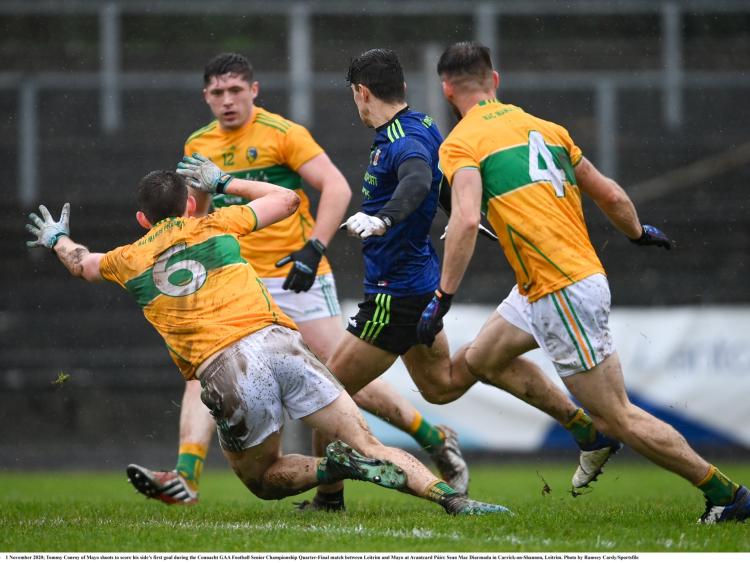 Efficient, powerful and ruthless Mayo showed a battling Leitrim of just how they have to go last Sunday in Avantcard Pairc Sean Mac Diarmada as the visitors cruised to victory in the opening game of the 2020 Connacht Senior Football Championship.

Leitrim got off to a blistering start and led by four points after ten minutes but once James Horan’s side started to find their feet, there was a sense of inevitability about this game despite a thoroughly committed and hard working display from the Green & Gold.

Terry Hyland’s side worked their socks off, displayed immense commitment to the cause and left every ounce of energy out on the strength sapping Pairc Sean surface, a heavy, wet and draining pitch that taxed even the fittest footballer.

But Mayo’s reservoir of strength, their stockpile of conditioning from playing at the top level for so long meant they were able to absorb whatever Leitrim threw at the them and give it back tenfold as their strength in the tackle saw the turnover count increase as the game went on.

And Mayo also had Cillian O’Connor, surefooted on a slippery sod and possessed of an accuracy that few can match. On a tough day when Leitrim’s massed defence made it hard for Mayo’s attack to really get going, O’Connor’s accuracy from placed balls punished Leitrim indiscretions.

But what really stood out about the Ballintubber man was his voracious appetite for the ball, O’Connor working his socks over in injury time to force a turnover from Paddy Maguire and setting up Aidan O’Shea for a point.

That sort of almost feral desire to win the ball was replicated all over the field by Mayo players as a team with seven debutants was definitely playing for places against Roscommon in Hyde Park next Sunday.

The conditions and the fact that Mayo were blooding so many untested players should have given Leitrim a huge chance but the gulf between the Mayos of this world and a fully committed, hard working and brave Leitrim only seems to be growing bigger and bigger.

Mayo could conceivably have a much larger winning margin were it not for three brilliant saves from Brendan Flynn and a block from Oisin McCaffrey as Leitrim never had a true goal chance over the 70 plus minutes.

Leitrim got off to a blistering start - almost straight from the throw-in, Domhnaill Flynn found his Mohill clubmate Shane Quinn for a lovely point after about 20 seconds. Two minutes later, Mark Plunkett’s long accurate delivery was caught as a mark by Evan Sweeney, the Glencar/Manor man tapping over.

Cillian O’Connor saw a shot drift across the face of the Leitrim goal while Eoghan McLaughlin’s fisted effort hit woodwork and rebounded clear. Leitrim went up the field, Evan Sweeney winning what looked like a very soft free, converted on the 14 yard line by Keith Beirne on ten minutes.

Mayo went straight down the field and when Aidan O’Shea fisted a ball back out, Bryan Walsh opened the Mayo account. From the following kickout, Mayo won the ball and sent in a long ball to Aidan O’Shea who was clearly pulled down by Oisin McCaffrey as the big Mayo man headed for goal.

That meant a black card and ten minutes in the sin bin for McCaffrey and a successful O’Connor tap over for Mayo. Ryan O’Donoghue left a shot short but in a precursor of the Mayo pressure that would force a lot of turnovers, Brendan Flynn lost the ball out from his goal before fouling Jordan Flhynn, O’Connor tapping over the free.

O’Connor should have levelled the scores but his shot fell short and it was spilled by a defence, the follow up blocked but Leitrim went up the other end, Conor Dolan getting taken down for a successful Beirne free just after the water break.

That water break saw Terry Hyland urge his team to be patient and control the ball but Mayo pressure kept forcing turnovers. A high ball into the Leitrim goalmouth saw the ball knocked down and Tommy Conroy, with a very generous allowance of steps, made the room to fire low to the Leitrim net.

Cillian O’Connor followed up with two from play, the first showcasing the movement of the Mayo forwards as he played a give and go with Conroy.

Mayo almost broke through for a goal when Ryan O’Donoghue broke through but Brendan Flynn knocked it out for a fifty that went short. A heavy foul on O’Connor saw Jack Gilheaney go into the referee’s book with the Mayo sharpshooter tapping over the placed ball with nine minutes left in the half.

Keith Beirne saw a free batted out by David Clarke while Conroy saw his fisted effort strike woodwork before rebounding clear. Leitrim did finish with a point from Donal Casey, a great pass in leaving the young corner-forward unmarked in front of goal but he drove over the bar.

That left Leitrim 1-6 to 0-6 in arrears at the break and a surging run from Cillian McGloin led to Keith Beirne converting the free. Cillian O’Connor tried to take advantage of a poor Brendan Flynn pass by lobbing the retreating keeper but hit the shot badly wide to the annoyance of his manager James Horan.

O’Connor made amends with a free after Jack Gilheaney dived in to gather the ball but played it on the ground after six minutes. Conor Dolan saw a shot deflected for a fifty that Beirne put wide but a successful free from the Mohill man again left two between the teams.

That was as close as it got as Mohill struck for 1-1 in the next minute. Matthew Ruane’s point came following a kickout and a quick one-two before Mayo gathered the next kickout, worked the ball down the wing for Cillian O’Connor to gather, shrug off his man and blast the ball to the net.

There was now six points between the teams and Leitrim responded with a good Conor Dolan point but there was still danger at the other end, Oisin McCaffrey making a vital block to prevent a Lee Keegan goal as Mayo were now finding more and more room in a tiring Leitrim defence.

O’Connor converted the resulting fifty wide as did Aidan O’Shea from a mark while Brendan Flynn made two fantastic saves to deny James Carr a goal on 19 minutes and another from Paddy Durcan as Leitrim were barely keeping the wolf from the door.

O’Connor converted the fifty, James Carr almost grabbed a goal with a spectacular over the head fisted effort after an O’Shea pass. The big full-forward added a point to stretch the lead to nine points with eight minutes left.

Keith Beirne got Leitrim’s last score of the game from a free with over five minutes to go but Mayo continued to harry, hassle and tag on points with Conor Loftus from distance, O’Connor and O’Shea all adding points to ease Mayo to a comfortable victory.