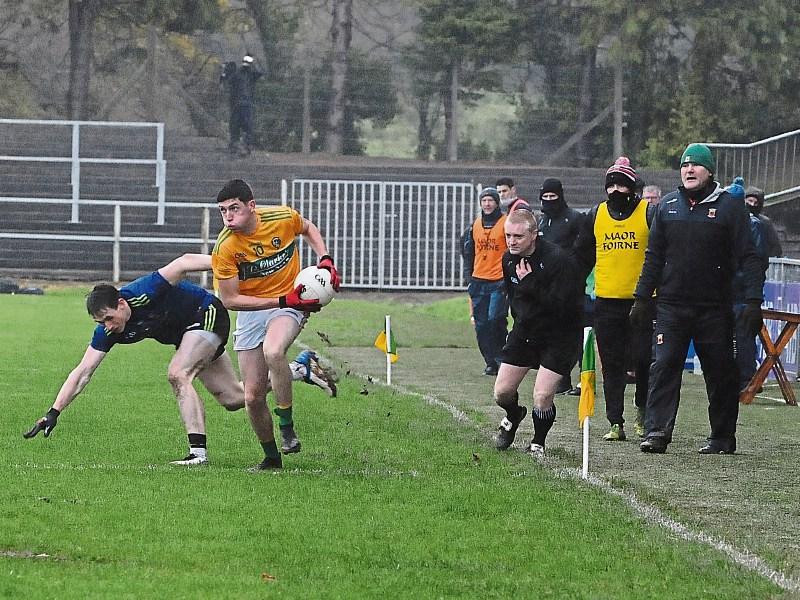 Conor Dolan surveys the options ahead of him after breaking through the challenge of Mayo's Paddy Durcan last Sunday Picture: Willie Donnellan

There is a temptation to go with the flow here, to be full of the joys of life after a strong and heart warming Leitrim display last Sunday against Mayo and to see a bright future ahead for Leitrim football once more after a decade of some awful, awful days.

First up, this was a battling and fully committed Leitrim display and the players, Terry Hyland and his management team deserve every plaudit they are garnering right now from quitely satisfied Leitrim fans who watched the war of attrition from Avantcard Pairc Sean Mac Diarmada on RTE News Now or GAAGo.ie.

Leitrim weren't expected to beat James Horan's side, they didn't but they took the game to the multiple All-Ireland finalists and never took a step backwards. The display reinforced the notion that there is talent emerging in the county, that Leitrim have the capability of bouncing back immediately in whatever format of Division 4 is eventually decided upon for 2021.

As you can see from my match report elsewhere, there were big displays from Evan Sweeney, Brendan Flynn, Conor Dolan and Cillian McGloin but it seems a little harsh on anyone who donned the Leitrim jersey last Sunday as each and every one of them gave every last ounce of energy they had for the cause and you can't ask more than that, can you?

This was all done without Ryan O'Rourke and Darragh Rooney, universally acknowledged as two of our most exciting, unpredictable and potent forwards while we haven't even mentioned the absent Shane Moran or Dean McGovern. Not to say anything of the likes of Paul Keaney, Riordan O'Rourke, Tom Prior, Mark Diffley, Oisin McLoughlin, the Harkin brothers and Jordan Reynolds from Mohill possibly waiting in the wings for their chance to shine.

But I suspect that even the most optimistic Leitrim fan who watched last Sunday's game, they know that for all the justifiable pride we all felt in the battling performance produced by Terry Hyland's troops, Leitrim are still a long, long way off competing with Mayo on an equal footing.

I got the feeling going into the game, most Leitrim fans felt that anything other than a complete capitulation would be greeted positively, quite a contrast from the feelings of despair that greeted successive losses to Roscommon over the past four years. Mayo's status as contenders for Sam Maguire may account for some of that but so are Roscommon.

So why the different reaction to last Sunday's display compared to the last four years I wonder?

This is not to take anything away from a brave Leitrim display - I like being optimistic and dreaming of glory for Leitrim teams but if last Sunday showed anything, it showed that the gulf between the Super Powers of Gaelic Football and the Leitrims of this world is as wide as the Grand Canyon!

Consider that Sunday's match had what looked like all the perfect ingredients for a good old fashioned championship shock!

So, all the ingredients necessary for a classic championship shock were right there. Thirty years ago with the same circumstances, Leitrim would have fancied their chances with good reason but what we got was a master class from Mayo on how to ruthlessly and calmly put down an insurrection.

Remember Leitrim had a four point lead after ten minutes and were playing with confidence but did Mayo ever look remotely troubled as they did back in 2006 when Dessie Dolan's side came so close to shocking a Mayo team who went on to reach that year's All-Ireland final?

Mayo squeezed the life from Leitrim's challenge for the remainder of the game and while Oisin McCaffrey's black card might have accelerated the process, Mayo's almost total dominance of possession was reflected in the stats that Leitrim kicked no wides - simply because we didn't have the ball in positions to attack Mayo.

Errors crept into the game as, instead of dragging Mayo down to Leitrim's level, the awful conditions emphasised just how important executing the skills of the game under pressure truly are.

How many times did Leitrim turn the ball over as the heavy pitch and even heavier challenges from the Mayo men started to extract an ever mounting toll from a brave but increasingly tired and drained Leitrim 15?

Only for some wonderful saves from Brendan Flynn, it could have been much, much worse while even Mayo's newcomers looked more advanced in terms of conditioning than a lot of Leitrim's veterans, again driving home the growing gulf between the top teams and the rest.

Let's be clear about this, I am not criticising Leitrim, far from it. They produced a defiant display full of heart & conviction that you could be proud of but the way the inter-county game has gone, the gap between Division 3 & 4 teams and contenders for Sam Maguire is greater than it ever was and Leitrim will not be alone in that.

Yet Sunday's performance did feel different, so much so I consider Sunday's display to be just the start of a new Leitrim journey, a stepping stone that must continue with a concerted and driven effort to win promotion back out of Division 4 as soon as possible.

We'll only get to Mayo's level when we regularly face these teams in meaningful League games and learn and build from there. It wasn't that long ago that Roscommon, Cavan, Clare and Tipperary were in the doldrums of Division 4 and we should strive to emulate their example of progress through the League first of all.

It won't be easy but it is through playing better teams and moving up the ranks of the League that Leitrim might someday have the strength in depth, the intensity and physicality to cause Mayo some worry, to have them coming to Avantcard Pairc Sean Mac Diarmada with a full strength team rather than throwing out a team half full of newbies and seeing if they sink or swim.

From talking to Leitrim players after Sunday's game, I'm hopeful for the future. There is a realisation that, for as much as they have done already, more needs to be done and a grim determination to do whatever it takes.

It is not all just on the players either - I've written for many years of the urgent need to make our club football much more competitive, to raise the standard so that when a young hopeful joins the county squad, they start from a much higher take off spot. Terry Hyland made much the same point last Sunday and perhaps we should heed him.

It is vital that we keep Hyland at the helm and learn from past mistakes when promising coaches were jettisoned just as they were finding their feet in the job. Keeping Hyland is step number one but we can't stop there, we need to build on the good work of recent years and maybe, then maybe, we can again dream of shocking Mayo.