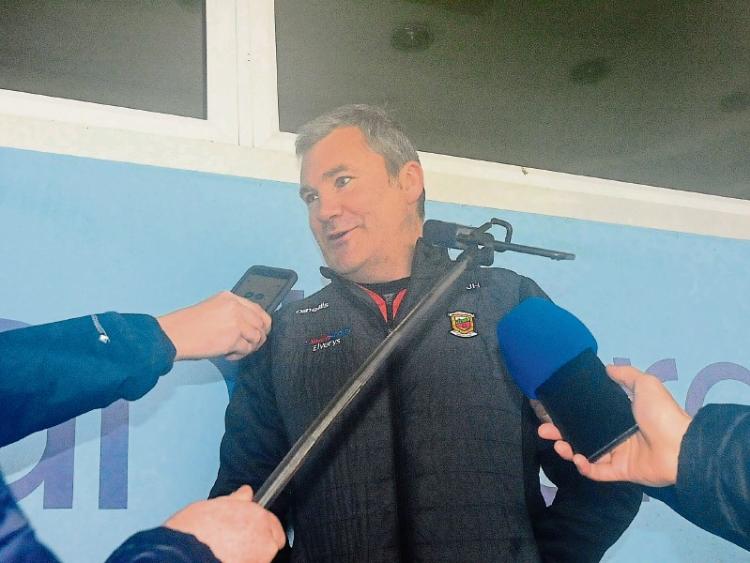 Mayo manager James Horan chats with the media after the victory over Leitrim Picture: Willie Donnellan

Tough championship this - barely have you won one match and you are already preparing for your next outing seven days later. But you sensed that James Horan was a very content man leaving Avantcard Pairc Sean Mac Diarmada last Sunday evening.

Mayo left Carrick last Sunday with their sights firmly set on dethroning reigning champions Roscommon in Hyde Park but Horan was giving nothing away about his team’s meeting with Anthony Cunningham’s charges next Sunday.

“Roscommon are a very good team, they are an excellent team,” said Horan when asked about their next outing, “They won Division 2, they’ll be on top of the ground on their own patch, well managed, well coached and in good condition so there could be fireworks.

"We have a huge amount of work to do. I'm expecting a huge challenge from them but one we are looking forward to."

“When you wake up on a Monday morning after playing a game like that, you might have a niggle or two but at the moment, very happy with a lot of players coming back into form. We have seven or eight debutants there today so there is lots of stuff to look at and we’re looking forward to the next week.”

Horan made the journey to Carrick expecting a tough day against Terry Hyland’s charges and that is what they got, although he felt that the surface of the pitch in Pairc Sean militated against good football.

“Leitrim had a good game last weekend, they showed good spirit against Tipperary, they were on their own pitch, they won the toss and they got the breeze and you just know it is going to be a fight for a long time. Leitrim got a great start, four up and it could have been one or two more.

“We were a bit sluggish and unsure with what was going on, it took us a bit to get into it. We got into it, we dominated possession but we made a lot of mistakes. That section of the field there is horrendous, we made an awful lot of mistakes there in the first half but we just kept at it and kept trying to do the right thing and hopefully, it will play out and we got the scores.

“We didn’t help ourselves with the amount of turnovers we gave away, the pitch was very heavy, conditions underfoot were very very tough today, incredible. Tommy got a goal for us at a good time, he has been doing well for us. I think after that we got a couple ahead and we managed the game from there on.”

With Cillian O’Connor producing a man of the match performance, it was not surprising that Horan had words of praise for Mayo’s all-time top scorer. But it was his workrate and not his scores that caught his manager’s eye.

“His scores are always very good but the amount of turnovers he won today, that is something we look at. He is a phenomenal tackler, his workrate was exceptional so delighted with the form he is in.”

Speaking of O’Connor and Aidan O’Shea, Horan added “The guys know what we’re trying to do and how we’re trying to play. It's huge that they produce those sort of performances. And Chris Barrett came on, those guys are role models and have such a huge impact on and off the field with the younger guys so there is huge togetherness there as a group.

“You need a big squad with the season that is in, with so many big games and the club season they way it was. We’re delighted to be there, we’ll have a chat on Tuesday and try to prepare for the game.

“Every team now is monitoring that (workload and recovery) very closely, Conor Finn is working on that, he is working very closely with Ciaran and James to make sure that sessions are exactly what is needed, some of those need to be individually tailored for where guys are.”