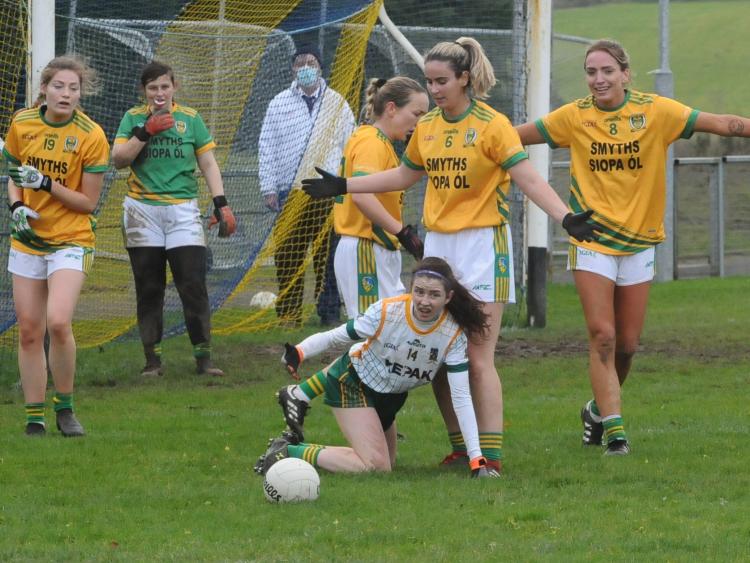 Hugh Donnelly’s team had gone into the game knowing that they were heavy underdogs but perhaps they didn’t expect this as Meath exploited the two division league gap between the counties in a superb display of power, precision and intensity.

At times, Leitrim simply couldn’t get the ball out of their own half as Meath forced turnover after turnover and then showed a clinical killer instinct by firing an incredible 3-10 in the first half.

With that sort of gap, there was to be no hope of a comeback but Leitrim kept battling, kicking six second half points against a team that is obviously determined to get their hands on the Mary Quinn Cup at the third time of asking.

Meath’s victory finishes the group as a contest but Leitrim will want to continue their development with next Sunday’s clash against Down in Inniskeen, Co Monaghan.

This was a tough afternoon for Leitrim where a lot of gaps were ruthlessly exposed but it is also the start of a journey that may take longer than expected but it is just the start.

Leitrim actually got off to the better start in Mullahoran with Michelle Guckian converting two frees in the first three minutes, the second after the Meath keeper lost an easy ball and conceded the free. Meath opened their account with a score from Bridgetta Lynch on three minutes.

Meath were soon in their stride as they completely dominated on the Leitrim kickout, Hugh Donnelly’s side unable to win possession or get out of their own half. Emma Duggan, listed at five but playing in attack, finished off a nice move to tie the scores.

Meath, in a pattern that was to become depressingly familiar, won the kickout and two passes later, Niamh O’Sullivan was racing through on goal only to see Michelle Monaghan make a wonder save at the expense of a point.

The next kickout, Meath win the ball, two passes and this time Duggan is notching her second point. It was repeated again on ten minutes when O’Sullivan got on the end of the passes to fire over.

Again the kickout was won, two more passes and another for Duggan. Leitrim tried to change it up but two kickouts that didn’t travel the required distance led to two successful Stacey Grimes frees and meant that the Green & Gold trailed by six points after 13 minutes.

It got worse - another kickout, another two quick incisive passes by the hard running Meath attack cut open the Leitrim defence and this time Grimes drove the ball to the net.

Leitrim lifted the Meath siege with a Vivienne Egan point after hard work from Laura O’Dowd but after three wides, Meath resumed where they left off with a point from O’Sullivan and a goal from Bridgetta Lynch after a poor pass was intercepted and Meath pounced for their second goal on 19 minutes.

Guckian and Grimes swapped frees as the scoring rate slowed but coming up to halftime, Meath showed their utter class when another great move that featured the powerful and immensely impressive Vikki Wall bursting through at pace to set up Lynch for a well taken goal.

That left a rampant Meath with a 3-10 to 0-4 halftime lead and Leitrim thoroughly demoralised. Marie O’Shaughnessy added a point to their tally from midfield inside the first 30 seconds of the second half before Muireann Devaney replied for Leitrim a minute later.

There was to be no let up and when the Meath keeper intercepted a Leitrim attack, the ball was suddenly going through a lot of hard running and quick Meath hands before ending up with Lynch finishing to the net with style.

Duggan and Wall would add points in the next 60 seconds and Meath pounced for goal number five when Sinead Tighe was robbed of possession and Megan Thynne surged in to find the net for the Royal County, the same player quickly adding a free.

Leitrim did threaten a goal once when Muireann Devaney got in behind the Meath defence and seemed destined to score only for Meath keeper Monica McGuirk to make a brilliant save. Leitrim did salvage a point from the move however when Laura O’Dowd gathered the rebound to score.

With Meath bringing on players, the impetus went from the game over the final quarter although Grimes and Duggan did add to their tallies. Meath’s Orla Byrne did get a harsh enough yellow card that helped Leitrim a  bit as Michelle Guckian added two from play inside a minute.

Grimes came back with a free before Leah Fox got her first championship point for Leitrim eight minutes from time. The game ended with a point apiece, Lynch for Meath and Devaney from a free for Leitrim as Meath cruised at their ease into the All-Ireland Semi-Final.