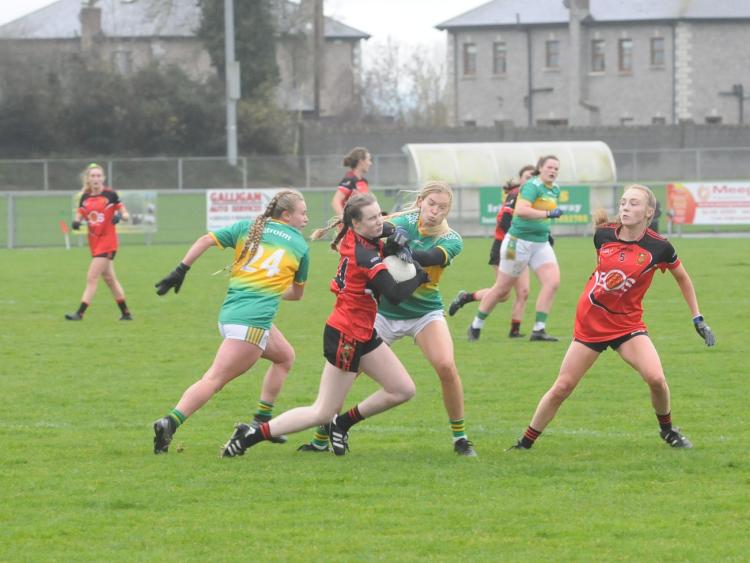 Hard to believe a team would be happy after an eight point defeat but a battling performance from Leitrim saw them test an experienced Down to the limit in the TG4 Ladies All-Ireland Intermediate Championship encounter in Inniskeen, Co Monaghan on Sunday afternoon.

Perhaps happy is the wrong word but there was enough in this battling performance from Leitrim Ladies to suggest that the first steps on their road to being a competitive force in the Intermediate ranks have been taken over these last two outings.

In the superb facilities in Inniskeen, Leitrim endeavoured to learn the lessons from their brutal loss to Meath a week previously and they largely did that against the Mourne women who proved just that bit slicker and certainly far more clinical than their Leitrim counterparts.

In a much improved performance, Leitrim were much more competitive, tested Down and improved enormously on their kickouts which caused such problems against Meath but they again got a lesson of the difference between the lower divisions and where the Green & Gold are playing their League football.

Put it simply, on a difficult cold and very windy day, Down’s ability to hold onto possession and pass the ball even when surrounded by Leitrim players really stood out, the benefits from playing Division 3 football clearly standing out for the Ulster side.

With a trio of deadly forwards in Jessica Foy, Natasha Ferris and Aoibheann McCarvill, Down had players who could and did take their chances and that perhaps sums up the biggest difference between the sides.

Leitrim created a few good chances with Muireann Devaney particularly unlucky with a couple of chances but when it came down to it, Down’s ability to take their chances proved the winning of the game.

It is not that the Down women were perfect, they hit the woodwork and the Leitrim defence made a couple of vital blocks and saves but Leitrim players again saw the level that they are looking to attain in the years ahead.

It was a much better performance from Hugh Donnelly’s side but just the start for a talened group who need to build on the talent in their ranks.

Down literally got the perfect start against the wind as a powerful run from midfielder Oonagh Lavery saw her cut through the Leitrim defence before finding Jessica Foy who blasted home for an easy goal after just 12 seconds of action.

Foy went close to a second goal two minutes later but her shot was blocked by keeper Michelle Monaghan and half her defence after a free dropped short while Foy also put a shot across the goal in the first three minutes.

Leitrim opened their account with a Michelle Guckian free after a foul on Siomha quinn and a great move that started with Sinead Tighe and went through Kasey Bruen, Laura O’Dowd and Muireann Devaney ended with Roisin McHugh driving the ball high over the bar, with perhaps a goal on.

McHugh quickly added another to tie the scores before a good move from a Down kickout ended with Natasha Ferris firing over the bar on seven minutes. But with the strong wind behind them, it was Leitrim who were forcing the pace and Vivienne Egan scored from distance after good patient team play.

A Gukian free was added to by a Laura O’Dowd point as Leitrim went two up but Down hit back with a Kate McKay point that could have been a goal after good work from Foy on 15 minutes.

Leitrim would rue bad wides from Devaney and Guckian while Down had a miss of their own when Ferris saw her goal bound shot rebound off the post. However, they didn’t have long to wait for a second goal as a turnover saw Aoibheann McCarvill cut through the defence, albeit with a hint of overcarrying, to find the net on 19 minutes.

That put Down back in front but a fine score from Egan cut the gap but despite playing against the wind, it was Down who finished the half strongest with four unanswered points from sub Orla Swail and three from Ferris, one a brilliant solo effort, to leave Down with a commanding 2-6 to 0-7 halftime lead.

The second half started with Leitrim almost copying Down’s first half start, a long ball finding Muireann Devaney but the Manor forward lifted her shot high over the bar with the keeper to beat. Devaney would have a frustrating day as her next chance, set up by a great Roisin McHugh run, ended with her shot rebounding off the far post and into the keeper’s hands after just two minutes.

Laura O’Dowd also had a wide but Down weren’t any better with three bad wides before Devaney and Foy swapped points. But any hope Leitrim were rising after a strong start to the second period ended just ten minutes in when Clara Fitzpatrick won a Leitrim kickout and sent a ball into Foy who fed the ball to an unmarked Ferris for a killer third goal.

Foy would add a free before Leitrim hit back with a goal of their own, Devaney turning provider for Roisin McHugh and the Ballinamore woman shot low to the far corner to leave five points between the teams again with 13 minutes to go.

Foy hit back with a point, matched by a Laura O’Dowd point on 19 minutes but that was Leitrim’s last of the game as they went looking for goals only to see Devaney drive a goal chance wide while McHugh had an effort saved by Down keeper Aisling Burns.

And Down made sure of the win as they hit the final three scores from Kate McKay, Mairead Kavanagh and the impressive McCarvill to secure their eight point victory