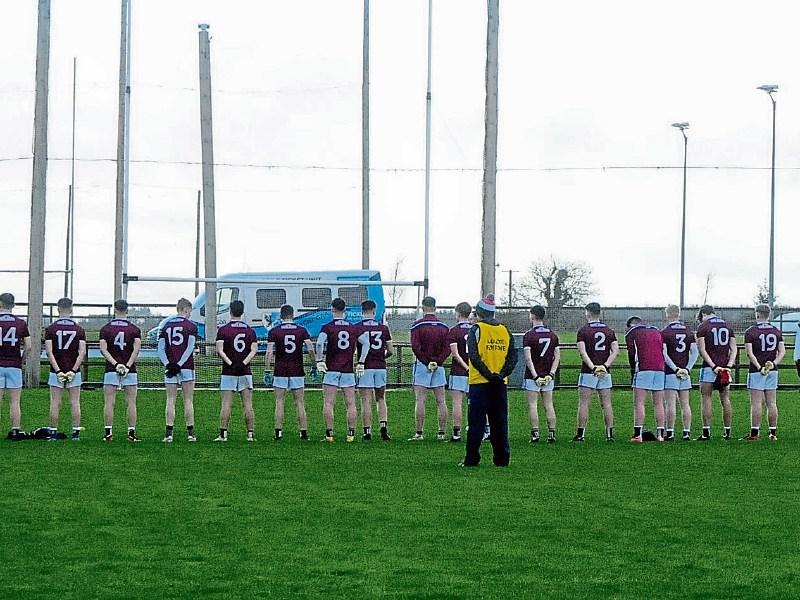 The Galway team stand to attention before their clash with Leitrim Picture: Willie Donnellan

The final scoreline might not reflect it but Galway Minor team manager Alan Glynn was a very happy man when he talked to the media following last Saturday’s hard fought victory over Leitrim in the Electric Ireland Connacht MFC.

“Very pleased. I suppose the last quarter would be the most pleasing aspect for us as a management. We were a man down with 17 minutes to go and we were three points up and it was looking fairly hairy,” said Glynn when asked about the match.

“The lads really threw off the shackles and played football with the level of intensity and hard work that we would have wanted for the whole match. We'd be focusing on the last quarter and saying that's the level we can play at, and try and knit that together for four quarters next week.”

What pleased the Galway manager most was his team’s response to going a man down as he highlighted the role played by the Leitrim supporters: “It would be exactly the type of response that we would be looking for, kind of staring down the barrel, under pressure.

“The limited crowd that was there sounded like a couple of hundred Leitrim people at times when they were kicking scores, so yeah, we would be really accentuating that as a huge positive. With 14 men to kick 1-6 and finish really, really strongly and by the end, our lads didn't want that game to end. They would have played on another hour with 14 men so very, very happy.

“Leitrim really put it up to us and really asked a lot of questions of our lads. The fitness came to the fore and we were very happy with the lads we brought off the bench. We've had four training sessions, having not seen ourselves for six weeks. We had five weeks prior to that, then we had four months off.

“Naturally enough, they're not going to be playing as a team straight away and we'd be kind of foolish to think that that would happen, much and all as we would want it to happen. As they grew into the game, with 17 minutes to go, they started playing the football we know that they can play and you can see, maybe, a really good team forming there which is quite pleasing for us.”

Glynn was also happy with the performance of his forwards: “We had about seven goal chances in the whole game. We took two, we left five behind us, a couple of half-blocks, one went off the outside of the post. So, from a forward's perspective, you have to be really happy with that if you're able in championship football to produce seven or eight goal chances, that's really positive for us.”

Glynn was also happy with the performance of man of the match Conall Gallagher: "Conall had a brilliant game, really happy with Conall. It's not just the six points that we'd be looking at, he smashed a couple of their kickouts forward, he won a couple of our huge kicks from marks.

"There was a couple of times when it was close and we weren't comfortable, he was diving on balls, there was balls to be won on the ground and he was doing all that stuff and then came up trumps with all the kicks. It was really all-round an outstanding performance. We don't really bother ourselves with who scores, I'm delighted he did all of those things and got scores."

If there was one thing that didn't please Glynn, it was not building on Cillian O'Curraoin's first half goal: "It was a huge goal but, in actual fact, it didn't give us the boost that I thought that it would. Yes, it gave us a boost on the scoreboard but I actually thought we went back within ourselves and possibly got a little bit complacent when that goal went in.

"We let our levels drop when we should have been doing the opposite and really going after them at that stage. It was a really well-taken goal."

The Galway manager also reflected on the difficulty of bringing just 24 players to the game against Leitrim and the difficulty of leaving players at home: "It's really tough and you'd really feel sorry for the lads. We've had to have eight guys watching [the match] through a link at home. That is really tough and the regulations are the regulations. I've been very impressed here [at the Connacht GAA Centre] today and how they ran the show, between getting in and the control.

"Covid, at the end of the day, is not gone anywhere. Yes, we are back playing football but we would be hoping and we would be saying that to those lads who aren't with us today that we'll be training tomorrow night and training Tuesday and they'll have an opportunity to maybe get in for the next day. That's just the scenario we're in and we can't do anything about it, unfortunately."