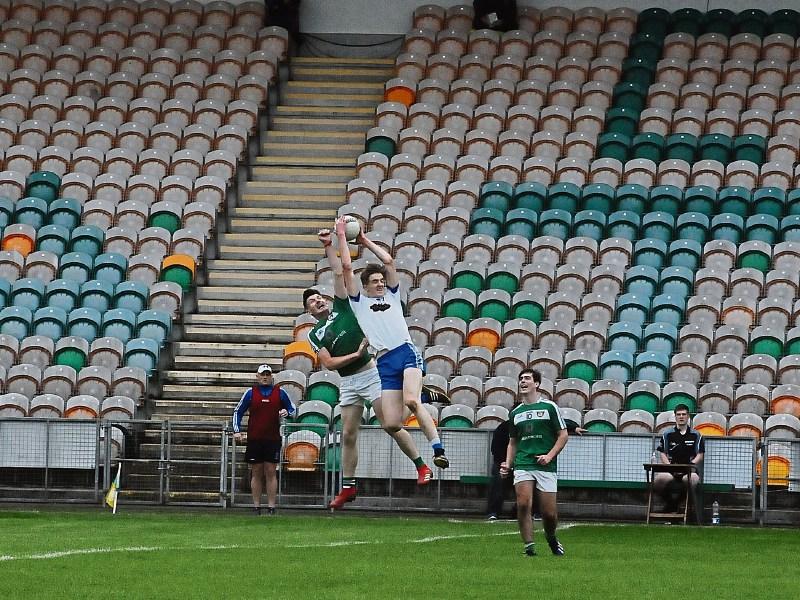 The empty stands for this year's County Final are reflected in the County Board accounts which saw gate receipts drop from €144,431 in 2019 to just €9,312 in 2020 Picture: Willie Donnellan

It was definitely not club against county last Monday evening when it came to discussing financial affairs at the Leitrim GAA County Convention, held online for the first time ever, but it was hard to escape a feeling of helplessness.

Given the Lockdown, the lack of crowds and no opportunities to fundraise, Leitrim GAA County Board did extremely well to turn in a deficit of just over €10,000 but the scale of the hit was illustrated by the fact that the Board had returned a surplus of €274,769 in 2019.

But with clubs giving voice to their own serious financial struggles over the past year, it was soon evident that there is no quick and easy solution to the financial shortfall that has afflicted both clubs and county.

Treasurer Martin McCartin informed delegates that the County Board would have returned a surplus for the year had they not taken a decision to allow Clubs keep the gates from the round-robin stages of the Club Championships.

If those gates had been kept by the Board, there would not have been a deficit of €10,668 for the year and Martin said that the Board would have to look at the situation going forward and see what the best option for everyone.

In regards to Affiliation Fees, Martin said that the insurance element had been taken out of the overall figure by Croke Park and had brought in €17,698 in total for the past year.

In relation to Affiliation Fees, Padhraic Corrigan of Glencar/ Manorhamilton asked if all Affiliation Fees had been paid for the year and going forward, would clubs be expected to play the same amount as it would be a problem for many clubs.

Martin said that the vast majority of clubs had paid their affiliation in full and payment plans had been agreed with clubs who were struggling to pay the fees. He added that one of the reasons clubs were allowed to keep the gates from the club championship was because the Board was aware of the difficulties clubs were having.

He added that some clubs probably made more money from the Club gates than they would have had from fundraising for the Leitrim Supporters Clubs but the Treasurer added that he would be issuing a “stark warning of what is ahead of us.”

Mr Corrigan replied that clubs had zero money coming in at the moment and how could they be expected to raise funds for affiliation, insurance, membership fees and supporters club draw with no income coming in, adding “this is a stark warning from Manorhamilton”.

Liam Freeburn said that the Leitrim Supporters Club draw was a serious burden on clubs who were not in a position to go door to door selling tickets for the club, let alone the County Board. “There is no money coming in and we can’t foresee money coming in. Our hands are tied and all the clubs are in the same boat.”

The Melvin Gaels chairman also said he was surprised that there wasn’t more of response from other clubs on this issue, wondering if they “must have a hidden pot of gold”.

Glencar/Manor’s Ciaran Sheridan asked if there was a plan to ease the burden on clubs but County Board Treasurer Martin McCartin replied that it would be more fundraising that would have to be done unless they wanted to wind up the County teams and not play inter-county competitions.

Martin added that the future was very uncertain but clubs and county board were in the same boat and hopefully, the situation with Covid will have eased and things will have opened up more towards the end of next year.

Cloone’s Sean McGovern pointed out that the smaller clubs competing in the lower grades did not cover their costs from the club championship gates and that there needs to be a serious look at the expenses the county board was incurring and how they were going to pay for them.

As it stood now, Sean did not believe that many clubs would be able to play their insurance next year.

Martin McCartin said that his understanding was that, although it is not yet confirmed, Croke Park would only seek one sixth of what each club owes for insurance for the 2021 season and would be looking at a different model going forward, based on the size of clubs and their grounds and the activity at their grounds.

Sean McGovern asked what if a club’s grounds is used frequently by other clubs for matches but Martin stressed that the new system was looking more towards clubs with commercial operations on their grounds.

Fenagh St Caillin’s Marie McGovern said that she hoped the issue of the Leitrim Supporters Club tickets would be looked at, terming it a “huge burden” on clubs. “Every club is the same, we’re wondering how do we get money in, especially when we can’t go door to door selling tickets.

“My priority will be my club and not Leitrim Supporters Club tickets. If we turned up at doors selling €50 tickets, we wouldn’t get very far with it and every club is going to be struggling.”

Annaduff’s Kevin Ludlow supported the sentiments of other delegates and added “I know it is an extremely serious situation but the same goes for Annaduff, it is going to be extremely difficult for us to play insurance and affiliation this year.”

Concluding the debate, Enda Stenson pointed out that one of the most difficult positions in any club is the job of Treasurer and he thanked Martin McCartin for his work for the county board, adding that he did not know how Martin did the job he has done over the past year.

“We in the County Board totally understand the position of clubs here tonight, every club is struggling but if we stick together and see out this next year, I think we can all get back to normal.

Finishing his remarks, Martin McCartin stressed that the County Board would take on the concerns of clubs but stressed that the work had to be done: “We’ve heard it from the clubs and we know that it is going to be difficult year coming on and there will have to be some serious decisions made.

“There are going to be dark times until we come out of this Covid situation but until we do, we will have to come up with a funding model that will allow us to field our county teams and play our games.

“I don’t know what we will do but this is short term and we will get out of this situation and we will be back in the good times again,” stressed Martin.