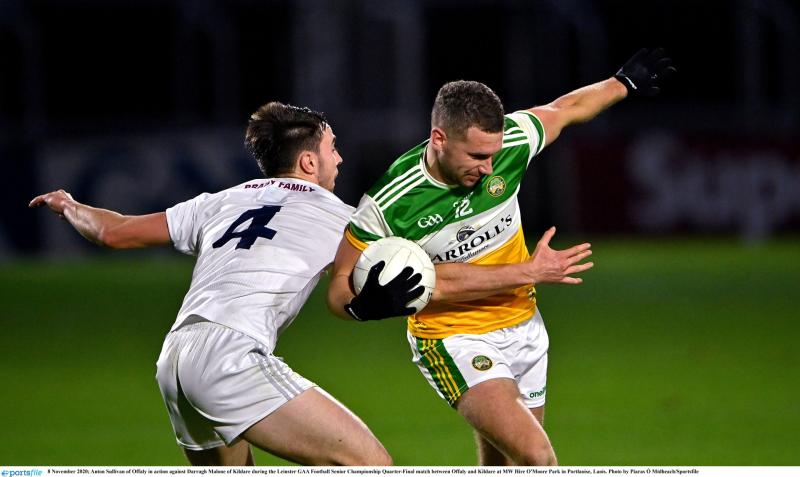 WITH Dublin in a knockout Leinster Senior Football Championship, Offaly's prospects of a successful season rest on promotion from Division 3 of the National Football League.

The targets for manager John Maughan and his squad of players are fairly straightforward: win promotion and beat Louth in the first round of the Leinster championship.

They are not simple ambitions but they are very achievable and Offaly have reason to be optimistic. With Tyrone folk hero Mickey Harte now at the helm, Louth should be a more difficult task than they would normally be. And Offaly have often found it difficult to beat them – they lived dangerously before beating them in the league last year, and Louth were on their way to Division 4. Offaly lost to Louth in the league in 2019 and 2017 and this game is very much a banana skin for them.

You would expect Louth to get a big bounce from Mickey Harte. He should get the best available talent in the county on board – this is something Louth have often failed to do. And despite Covid-19 lockdowns, you would expect Louth to have a much improved level of fitness. Offaly will be slight favourites but their progression to a quarter-final meeting with Kildare is anything but assured.

The semi-finals will be on an open draw and that is good as you don't really want to know if Dublin are waiting for you.

Offaly would love to renew acquaintances with Kildare. They were not far off Kildare in last year's championship when they lost by four points and Offaly football does appear to be moving in the right direction. They spurned a great opportunity against Meath the previous year and Offaly does look to be on the verge of a big result. They haven't got over the line and that asks its own question but Offaly are beginning to compete against all Leinster counties outside of Dublin.

That represents progress. John Maughan has proven to be a good fit for Offaly. The vastly experienced Mayo man has had a steady hand at the wheel and he has not been afraid to face up to players. It means that good players have gone and one of the best forwards in the county, Joe Maher had to wait his time before getting in this year, having annoyed Maughan by not accepting his invitation in 2019.

Maughan hasn't said this and it is speculation but 2021 is likely to be his last year as Offaly manager. Unless some huge breakthrough is made, Maughan is unlikely to face into another year of long round trips from his Castlebar home. Even last week, he spoke casually about the toll the travel takes on him. There is no doubt that he is enjoying his time in Offaly, that he is fully committed but it is a fairly gruesome journey from Castlebar to Kilcormac.

If this does prove to be his last year, Maughan can walk away with his head up high. Three years is as much a commitment as any Offaly person could expect from him and he has raised the bar for players in terms of what is expected from them and the way they should conduct their lives.

Maughan is a very proud man and he would love to leave Offaly in a better place than he found them. He has probably already done that but real tangible evidence would be promotion in the National Football League. You just can't provide any coherent case for Offaly winning Leinster and promotion is their big aim this year.

The split league because of the Covid enforced restricted season has been kind to Offaly. They are in Division 3 south with one game away and two games at home. Wicklow should be their easiest game and that is the away one as well as being first up. Offaly are not that good that they can take anything for granted against any opposition but they will be bitterly disappointed if they don't get off to a winning start here.

The two Munster teams, Limerick and Tipperary are at home. Tipperary have punched at a higher level than Offaly in recent years and won the Munster championship last year – they required extra time to beat Limerick in the semi-final. That shows how difficult Offaly's task is but they have a chance. With two going into semi-finals, Offaly can get there with two wins and they can do this.

Time will tell and as John Maughan said, they need their key players fully fit and to avoid injuries. Niall McNamee is back for another season and that is good news. He dislocated his finger at a recent training session but will be okay for the league opener. At this stage of his career, McNamee is unlikely to be a 70 minute man but he has a huge amount to offer, whether starting or coming off the bench.

Cian Johnson is an ongoing injury concern. He got surgery on a gilmore groin and it looks like the Ferbane sharp shooter won't be back until later in the season. Cathal Donoghue injured a knee in training recently. The Kilcormac/Killoughey man is a strong running utility player, who would possibly be used on the half forward line, and he needs experience at this level.

Donoghue is among the talented young players coming off the Offaly U-20 squad. Bill Carroll, Jack Bryant, Ciaran Donnelly, Jack Quinn and Rory Egan are all talented emerging players who are in Maughan's plans.

There are also returns for Ferbane's Joe Maher and Raheen's James Lalor. Joe Maher's form in the Ferbane attack has fully warranted his call up and it is good that he is back as it looked like he had burnt his bridges with Maughan – Maher didn't come in when asked to in 2019, citing college commitments, and he wasn't asked in last year even though he made it clear he was available.

Lalor impressed in the Offaly defence a few years ago but didn't feature under Maughan as he focused on other commitments. He is a good addition to the defensive options.

Offaly are very much a work in progress. Part of the challenge for management is to balance the need to give young players experience with the desire to put their strongest possible team out and make a promotion charge.

The big question, however, is what is Offaly's best team. While they were close to beating Kildare and especially Meath in the last two years, Offaly didn't and they definitely need to start blooding new players. It needs a shake up and players such as Donoghue, Bill Carroll, Bryant, Donnelly, Quinn and Egan represent a big part of the future for Offaly football. They can really benefit from playing with players of the calibre of Niall McNamee, Eoin Carroll, Peter Cunningham and Anton Sullivan.

Offaly start away to Wicklow on May 15 and that starting team will give an indication of their plans. At least a couple of those young players need to be given their head.

Offaly should do reasonably well this year. They have their limitations and are well short of being a first tier team. However, they could move up into the second tier and promotion is crucial to this. In the championship, the target is to beat Louth and have another crack at Kildare.