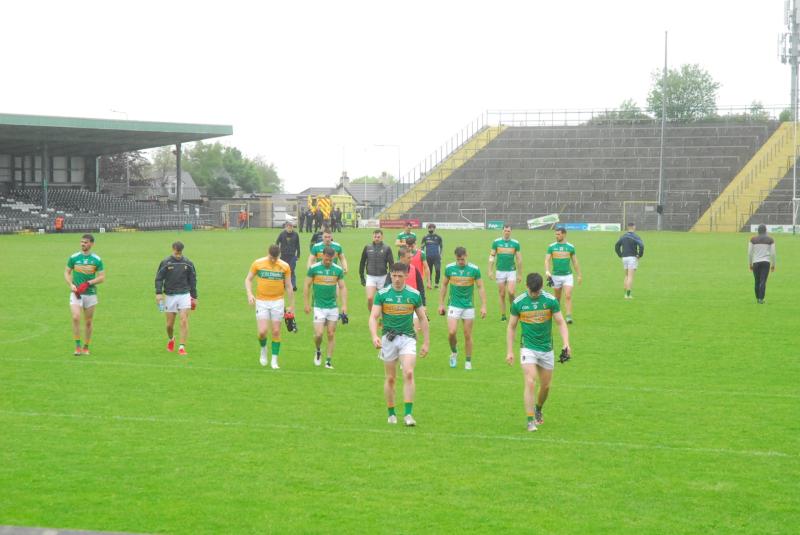 There haven’t been many days when a Leitrim team has scored 18 points and come off the wrong side of a seven point loss but there was no disputing Sligo deserved to win this exciting and open Allianz NFL Division 4 North tie on Sunday in Markievicz Park.

In a game where there was little between the teams, Sligo were both more dangerous and more wasteful than the Green & Gold but the game truly turned on the 36th minute dismissal of Leitrim defender Aidan Flynn.

Flynn protested his innocence for what looked like an innocuous challenge from the stand side of the ground but referee Niall Cullen from Fermanagh ruled that the Leitrim man’s shoulder had made contact with the Sligo defender’s head and a red card followed.

The card had a huge effect on this game although Sligo manager Tony McEntee reckoned it actually hindered his team while Leitrim fans will wonder what might have been when Cillian McGloin broke through the cover with just three points between the teams in the second half only to see his shot parried away.

Yet, in terms of creating chances, particularly goal chances that Brendan Flynn did extremely well to deny, Sligo enjoyed the better of the fray and were deserving winners on the day as their very youthful team look a more formidable outfit that many will expect.

In a division as tight and as competitive as Division 4 North promises to be, the defeat is costly and makes next Sunday’s clash against Louth in Avant Money Pairc Sean Mac Diarmada a must win encounter for Terry Hyland’s men.

Leitrim started off on the front foot but Paddy Maguire saw a long ball just escape the grasp of Keith Beirne. Red Og Murphy opened the scoring on two minutes but when Sligo corner-back Ryan Feehily lost the ball, Keith Beirne played a one-two with Dean McGovern to open the scoring.

Beirne quickly added another when he was left alone in space but the nature of this game was set when Sligo hit back with two points in as many minutes from Conor Griffin and a Sean Carrabine free.

Back came Leitrim with Darragh Rooney scoring from a mark that was moved in before Beirne swept over a free after a foul on Dean McGovern. Leitrim took advantage of another Sligo turnover, Aidan Flynn setting up Darragh Rooney for the score.

Evan Sweeney’s point after good patient play from McGovern saw Leitrim stretch the lead to three but then Sweeney saw a shot blocked. Niall Murphy gave notice of the danger he would pose with a good catch and fine point under pressure.

Donal Wrynn made a fantastic mark from the kickout and released Shane Quinn who set up his Mohill clubmate Beirne for the point on 12 minutes but Cian Lally narrowed the gap once more. The tit for tat continued when Wrynn blasted a monster effort from well out the field over the Sligo bar at the dressing room end.

That scored brought the first water break but it was Sligo who reacted best to the resumption with David Quinn, Carrabine (free) and Niall Murphy each firing over a point in a four minute spell.

Darragh Rooney took a mark to score on 23 minutes before Brendan Flynn made a superb save to deny Sligo’s raiding centre-back Paul McNamara, the ball clear. Rooney scored a wonder effort from the dressing room corner and Mark Plunkett obviously decided anything his Melvin Gaels clubmate did, he could do for he swept over a great point from the same corner.

That left Leitrim three to the good with seven minutes left in the half but it was Sligo who would laid the foundations for victory before the break. David Quinn scored a brilliant effort before Brendan Flynn managed to divert Cian Lally’s goal bound shot over the bar when the centre-forward got in unmarked behind the defence.

Keith Beirne replied with a free but the turning point came just over a minute into added time when Fermanagh referee Niall Cullen immediately brandished a red card to Aidan Flynn for a collision on a Sligo defender. Flynn protested his innocence but the red stood.

Sligo closed the gap to a point with a Red Og Murphy free just before the break to leave Leitrim with a 0-12 to 0-11 lead but a man down and facing the wind for the second half.

Cillian McGloin almost tied the scores in dramatic fashion as he broke through the Sligo rearguard at pace but keeper Eamon Kilgannon diverted his shot away for a fifty that Beirne was unable to convert.

Leitrim finally got their first score of the second half just before the second water break when Mark Plunkett scored a fine point while sub Conor Dolan was desperately unlucky to see his effort drift narrowly wide after he beat a hard tackling Sligo defence.

The crucial score came with 14 minutes left - a long ball found Sligo sub Nathan Rooney, son of Leitrim legend Aidan, in the corner. With Niall Murphy calling for the ball in front of the Leitrim goal, a high ball in was brilliantly fielded by the full-forward who beat his man and drove with venom to the net.

It was a huge score that put Sligo in the driving seat, the Yeatsmen extending the lead when their keeper gathered a poor Shane Moran shot and the ball went the length of the field for Red Og Murphy to score.

Mark Plunkett made it a trio of wonder scores from the wing with nine minutes left but Leitrim’s faint hopes were shattered two minutes later when Cian Lally got in ahead of the intended recipient of Brendan Flynn’s short kickout, the Sligo man rounding the keeper before rolling the ball to the net.

That effectively ended the game and although Beirne added two more points, one from a free, and Conor Dolan also hit the target, Tony McEntee’s men kept Leitrim safely at bay with points from Paddy O’Connor, Peter Naughton and goalkeeper Kilgannon to run out comfortable seven point winners.