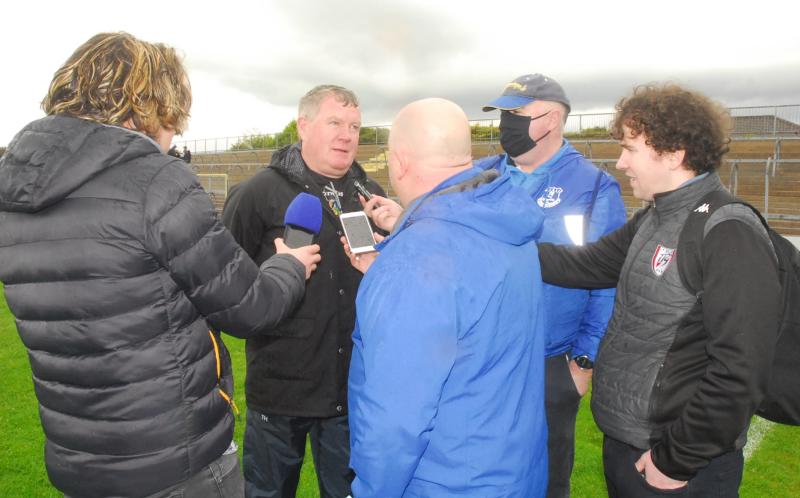 There was no getting away from it and so it was no surprise that straight off the bat, the first question to Terry Hyland after Sunday’s 2-19 to 0-18 defeat at the hands of Sligo in the Allianz NFL Division 4 North tie in Markievicz Park was if Aidan Flynn's sending off was the difference between the teams.

True to his nature, Hyland didn’t shy away from a difficult question and, in truth, there was only one answer the Leitrim manager could give: “Of course! You go a man down and that is where you are caught - you either push up or you drop back and try and defend. But once you go a couple of points behind, you have to go after the game because there is only one way the game is going to go otherwise - it is going to go further away from you.

"In modern day football, if you go down a man, it is very hard to recover from that. You end up playing 45 minutes without a man and that taxes the legs, especially with the short run-in everybody has had to prepare for this league. It probably was the turning point in this game because, I wouldn’t say we were comfortable but we were going reasonably well at that stage.”

The dismissal came in added time at the end of the first half when Leitrim were leading by a point and the the Leitrim Gaels clubman was visibly distraught by the decision of Fermanagh official Niall Cullen to brandish a red card after what a lot of people felt was an accidental collision with Sligo’s Cian Lally.

“I know it is a cliche but I’ll be honest with you, I didn’t really see it,” said Terry, the former Cavan boss adding that referees need to be able to make distinctions between accidental and deliberate collisions after a Sligo reporter said that, from his angle on the opposite side of the pitch, the referee had no choice but to issue the red card.

“We have deliberate and we have accidental and maybe the decision the referee has to make is whether a thing is deliberate or accidental,” mused the Leitrim manager, “I don’t know if there is a balance in there in the rules but I can’t say if the rule covers for accidental or not.

“I thought the free count was very high today and I honestly thought with the advantage rule, there doesn’t seem to be an advantage any more. If you break a tackle and you gain ten yards, the referee blows and pulls you back right away so I think they’re going to have a look at it.”

Neither did Hyland want it to come across that he was criticising the referee but he suggested the rules need clarification: “I’m not saying the referee was inconsistent but the rule needs to be looked at - if you are fouled and you gain an advantage, the play should be let go on. Why let a guy foul, hand up, go ten yards and then decide to blow - it is either a free from the start or not.”

However, Hyland stressed that there were other areas of the game that warranted analysis, even saying that management might need to have a look at themselves given the fact that Leitrim incredibly scored 18 points but still lost the game: “Maybe management need to look at themselves on the back of that. We went out with a plan, we were organised, we knew what we were doing but again, we lost the player and that just threw the whole thing into disarray.”

The sending off loomed large in the conversation but Terry pointed to the concession of a goal off a Leitrim kickout and missed chances as factors in the defeat: “We would have always thought that the defensive side would have been the stronger side of our game over the last year and a half but sometimes it opens up and that’s the way it goes. Once you get the sending off, a lot of those best laid plans go out the window.

“They are the risks you take when you chase the game and when you don’t finish on the other side when you have the opportunity. It was on the break that really caught us and lads will just have to get a little more wiser.

“We had one bad mistake from a kickout where we got caught for one of the goals. We had an opportunity at the other end which resulted in the ball coming back up. That was a bit of a problem because we dropped a lot of balls short and it resulted in scores on the other side because we were committed and we didn’t finish.”

A missed Cillian McGloin goal chance might have altered the course of the game in the second half such are the tiny margins in inter-county football: “Cillian McGloin’s opportunity in the second half, if we had put that way, it would have made an interesting finish to the game and that is what games turn on. Then we gave away a bad goal from a kickout after that so suddenly we went from within touching distance to six or seven points and that is what changed it in the end.”

The water breaks also proved big interruptions, particularly in the first half as Leitrim were just getting on top at the time: “These famous water breaks have a habit of breaking momentum - it was the opposite in the first half, we were going well and then they came back into it. We only scored one point in the period before the water break in the second half and then we started to come back more into the game. Maybe the momentum breaks and you have to take it from there after that.

“But to be fair, once we went a man down, you are always going to run around. Modern football is all about keeping possession and maybe at times we didn’t do that.”

Despite the defeat, there were plenty of positives in the Markievicz Park performance: “We probably defended well, broke well in the first half and kicked the scores. There probably was a breeze up at this end which facilitated a little bit of that, I thought we were very efficient with our shot selection at that stage. Considering that we struggled on our own kickouts and on the Sligo kickout in the first half, when you consider it that way, when we did have the ball in our hands, we played quite well with it.”

Hyland was also happy with the impact of his full-forward trio of Keith Beirne, Evan Sweeney and Darragh Rooney: “The way we set up to be fair, we knew we would have three up and you depend on finishers and if they get their hands on the ball, that is their job - to finish.

“They’re not taxed with running back behind midfield into their own defence and we’d hope to keep their legs as fresh as possible when we do get the ball up there. We thought we were struggling on both kickouts for the first 20, 25 minutes of the half and considering we were three points ahead, it was more from open play we were getting joy rather than winning possession.

“So that is probably something we took a look at in those last ten minutes of the first half. Got a little bit more joy out of it but I would have felt that we punished it a little bit more. In fairness to the lads, they kept plugging away to the very end.”