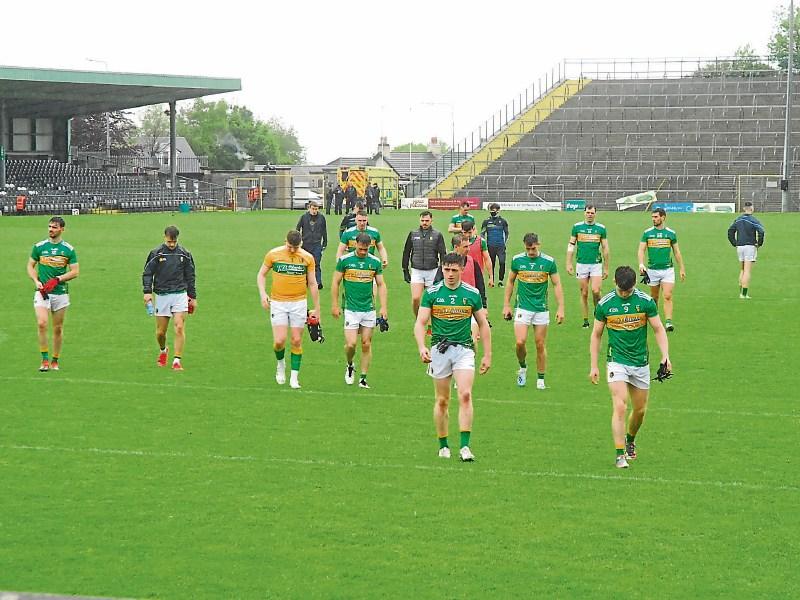 Your reaction to Sunday's results will depend on whether you are the glass half-full or the glass half-empty type of person. If that's seems somewhat vague, well then it is because there was plenty to like about the performances of the Leitrim hurlers and footballers, certainly just as much as there was in both defeats to disappoint.

It is very easy to proclaim that Leitrim's League hopes are all but over after Sligo's triumph in Markievicz Park and that the hurlers haven't got a hope in hell of dislodging Louth from top spot in Hurling's Division 3B but anyone with the slightest modicum of knowledge about sport knows that it rarely goes in straight lines.

A door may appear slammed shut one day only for something miraculous to transform your entire world view! A trifle romantic maybe but where was the Irish soccer team heading until Scotland's Gary Mackay popped up in Sofia to score a goal that put Ireland in the European Championships? Would all those great days with Jack Charlton in Stuttgart, Rome and Giants Stadium have occurred without the intervention of the Scottish journeyman?

There are days that epitomise “what if” in Leitrim legend that you just can't forget - what would have happened if Packie McGarty hadn't had his jersey ripped from his back in 1958? W0uld Leitrim have had back to back Connacht titles in 1995 if Padraig Kenny had stayed on the field against Galway?

Its a form of torture that sports fans subject themselves to, debating what might have happened if ball hopped one way instead of the other, if it went an inch the other way or someone has moved a fraction of a second earlier or later - it is an entertaining and masochistic as it is pointless.

I only say this because we had four instances of the great “what if” last Sunday, three involving the footballers and one involving the hurlers seems to belong to the realms of the truly bizarre!

The referee is the sole arbiter of what the final score is and if he tells you that you didn't score a point when everyone believes you did, even with video evidence, it is hard to fathom how to come back from that one. I was up in Markievicz Park so I can't say definitively what happened in Pairc Sean last Sunday but it seems bizarre that this sort of situation can arise in a Allianz League game.

You can ask what did it matter when Louth won by two points but just put yourself in the boots of a Leitrim hurler who thought he was a point to the good deep into injury time only to be told the scores were level? How would you react? Could you keep your concentration and play on as if nothing happened?

But somehow Olcan Conway and his troops have to park that bewildered anger next Sunday when they travel to Brewster Park to take on Enniskillen. The hurt will take some time to get over but a win against Fermanagh would be a start and if there is any team who relish in overcoming the odds, it is these Leitrim hurlers. I'd back them to soothe some wounds with a win in Brewster! 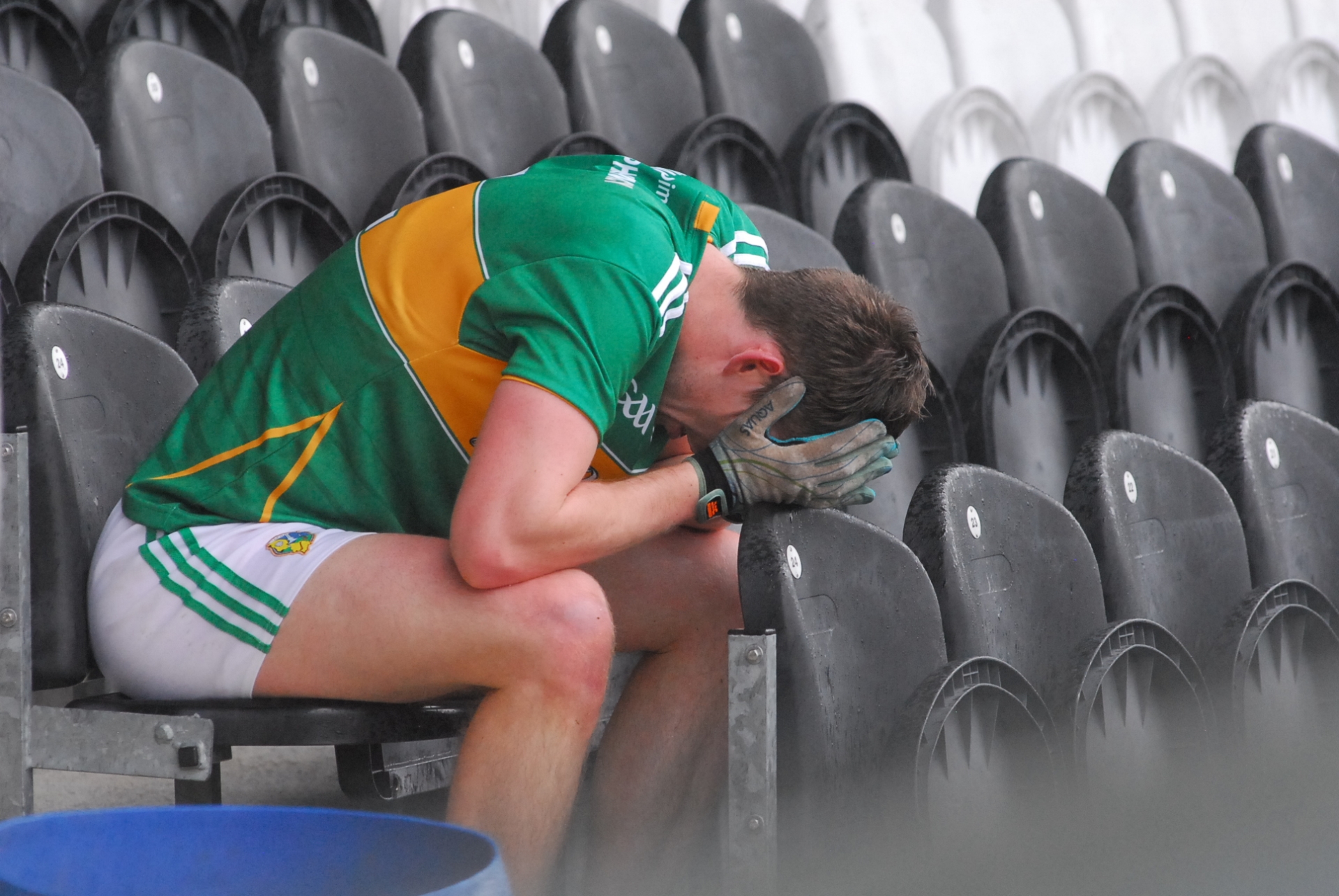 A distraught Aidan Flynn pictured in the Markievicz Park stands after his dismissal against Sligo Picture: Willie Donnellan

Aidan Flynn knows how the hurlers feel after he received a contentious red card in Markievicz Park. Again, I'll come clean and echo Terry Hyland's words when I say that I didn't see it clearly from my vantage point. But seeing the reaction of the referee, I instantly feared Flynn could be in trouble and unfortunately that premonition proved correct.

Did it have a big bearing on the outcome? Of course it did, it would be plainly stupid to suggest otherwise and, if you think about it, frankly insulting to think that losing a player of Flynn's athleticism and energy would not be missed. Now, I haven't talked to Aidan but it was plain to see he was deeply aggrieved that the red card was produced. More than that, Flynn seemed genuinely upset by the thought that he had let down his teammates and it says much for his character that the dismissal plainly hurt badly.

But having sympathy for Flynn does not mean acknowledging the red card put Leitrim in a huge hole, of course it did. His manager said so after the game and it is a fact.

But lets be clear about this - the red card made it very difficult for Leitrim no more than Shane Quinn's red card against Offaly in last year's League. I don't think I've seen too many people deliberately going out to get sent off - I have seen a few but that's for another day - and some players take a bullet for the team to prevent a match winning score but Flynn is guilty of nothing more than a mistimed challenge.

The inches involved in that challenge on Cian Lally were the same inches that saw Cillian McGloin's shot saved by the Sligo keeper or the half-foot or so that would have turned Brendan Flynn's kickout into a successful delivery to a teammate rather than an interception and goal for Sligo.

We can go all Al Pacino and quote “Any Given Sunday” here with the famed inches speech but in a game of this level, inches really is what it is all about and inches are what makes the wonderful interception or the missed tackle - it really is that close.

Flynn is hurting right now and unfortunately suspension means he won't be able to get back out on the field straight away but his teammates need to channel that hurt next Sunday when Mickey Harte brings Louth to Avant Money Pairc Sean Mac Diarmada.

Victory would reignite Leitrim's hopes of making the top two and a shot at promotion back to Division 3 but the Leitrim lads will need to dig in. They showed last Sunday they could score, and how impressive was a return of 18 points, but there was a worrying openness to the defence and in truth, Sligo should have plundered a few more goals.

Louth won't hold any fears for the Green & Gold but neither will Louth be too afraid of Terry Hyland's troops - this game tends to go to whoever is in a run of good form at the time. Both teams are hurting right now and victory in Carrick will get the winner back on track and leave the loser in Division 4 for another year.

The challenge for the players is to regain the momentum they had going into the Sligo game. You could sense from just looking at the players trooping off the pitch at Markievicz that they were shell-shocked by the result but what we believed about them and what they believed about themselves last week before the start of the League is as true today as it was then.

That's quite a lot of pressure but what the Leitrim players, football and hurling, need to do is to dig in, find their inner-thicko and refuse to take a step back and truly believe. They've shown the talent in the past to beat Louth - now it is time to dig deep, be stubborn and show what they can really do!