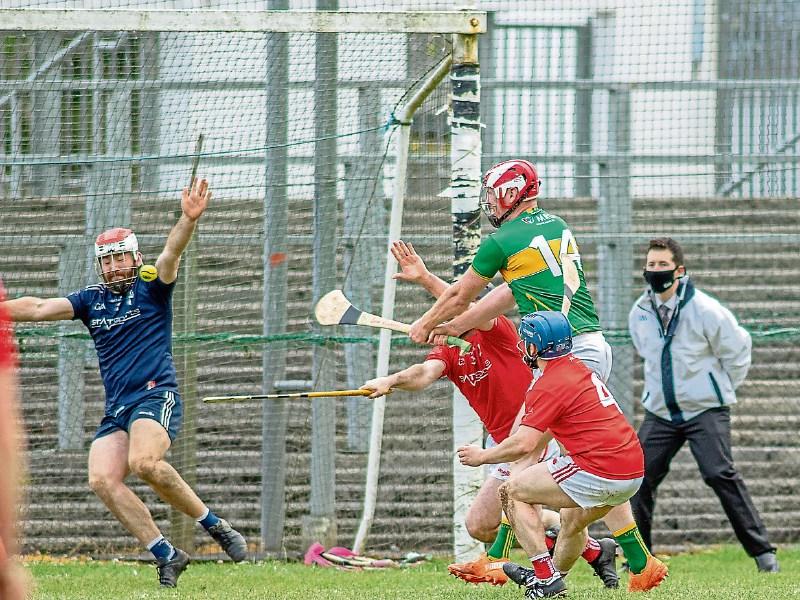 Leitrim hurlers were left feeling short-changed on Sunday in Avant Money Páirc Seán Mac Diarmada in more ways than one when Louth struck for two late points to sneak victory at the death of this crucial Allianz NHL Division 3B clash.

There was added and very deep frustration for Olcan Conway's side with a controversy during injury time when the referee reduced Leitrim's tally by a point, a move that left the Green & Gold level rather than a point ahead with Leitrim officials adamant that an error was made by the Galway official Brian Keon.

With Leitrim thinking they were a point to the good, manager Olcan Conway dropped full-forward Colm Moreton back into defence to protect the lead but during a break in play for an injury to Aaron McDermott some four minutes into added time, referee Keon informed officials that the scoreboard was wrong and that the scores were actually level.

Despite protests from the Leitrim bench, the official insisted his tally was correct which led to the Leitrim bench frantically trying to reorganise their formation, telling their players that the scores were level and urging them forward in pursuit of victory.

Louth then struck for two late points from sub Sean Kerrisk & Darren Geoghegan and Leitrim's misery was compounded with the late dismissal of Paul Lenehan on a straight red card.

To compound matters, Leitrim officials confirmed to the Observer late on Sunday evening that they had reviewed the video of the game afterwards and their tally of scores came to 2-12 at the time of the controversial incident.

Unfortunately, there is no recourse for the hurlers with the referee's decision final but it leaves Leitrim's ambitions to win the League in tatters as Louth look unlikely to drop any more points against Fermanagh and Cavan.

When they look back on the game, Leitrim will be disappointed that they never produced what they were capable of, except in a few spurts and they will feel this was a glorious chance to win promotion that escaped from their grasp.

Louth enjoyed the better of the first half exchanges and deservedly led by four points at the break but it seemed Leitrim might have turned the tables on Louth just prior to the second period water break after Colm Moreton rammed home his second goal and Gavin O’Hagan chipped in with a point for a two point advantage.

Louth opened brightly with Darren Geoghegan whipping over points from a free and play in the first three minutes. Leitrim hit back with a fourth minute Gavin O’Hagan free while Louth’s Niall Keenan was yellow card two minutes later.

The Wee County men went further ahead after Geoghegan (free) and Paul Matthews added a point apiece. But Leitrim kept in touch thanks to Cathal O’Donovan and Ben Murray who landed a point each by the 13th minute while two minutes later Leitrim goalkeeper Michael O’Brien denied Matthews a goal.

Louth continued to dictate matters and enjoyed a four point advantage by the 29th minute after Andrew Mackin fired over and Geoghegan sent over two frees. Leitrim reduced the deficit over the next three minutes thanks points from Cluainin duo Karl McDermott and a Gavin O’Hagan free.

Points were traded by Louth sub Conor Quigley and Leitrim’s James McNabola. The Louth men finished the half stronger and led by 0-10 to 0-6 at the break after Darren Geoghegan tapped over a free and Paul Matthews pointed from play.

Just before the interval Gavin O’Hagan came close to getting a goal but saw his shot hit the crossbar while Louth’s James McDonnell was shown yellow. Another Louth man, sub Thomas McCreesh had also a yellow brandished at him in the opening minutes of the second half.

Darren Geoghegan drew first blood in the second half when put over a 42nd minute free but Leitrim roared back into contention in the following minute when Colm Moreton flicked the sliothar to the Louth net after his brother Liam dropped a ball into the Wee County’s danger area.

A 44th minute Gavin O’Hagan free cut Louth’s advantage to the minimum. The status quo was still reflected on the scoreboard after converted frees by Louth’s Geoghegan and Gavin O’Hagan.

Louth went two points clear a minute later when sub Neil Thornton shot over. The Moreton brothers again teamed up in the 49th minute to put Leitrim in front for the first time in the game when Colm fired home a goal from close range after Liam acted as provider from outfield.

Four minutes later Gavin O’Hagan edged Leitrim two in front when he tapped over a placed ball. But Louth regained the lead again on 57 minutes when Paul Matthews drove to the Leitrim net.

It was even Stephen two minutes later after Gavin O’Hagan converted a Leitrim free. In what was still a nip and tuck scenario Neil Thornton edged the Wee County ahead on 63 minutes after he shot over.

It appeared that Leitrim had levelled the scores shortly afterwards when James McNabola scored a point, a score acknowledged by both teams’ mentors as well as all media people present. However, referee Keon subsequently informed the teams that he had ruled out McNabola’s ‘score. to the consternation of the Leitrim bench.

Liam Moreton did get Leitrim on level terms when he fired over a 73rd minute effort. Then in the dying minutes of added time, Leitrim were reduced to 14 players due to Paul Lenehan’s late red, a Louth surge yielded victory for the visitors after sub Sean Kerrisk and Darren Geoghegan (free) added a point each