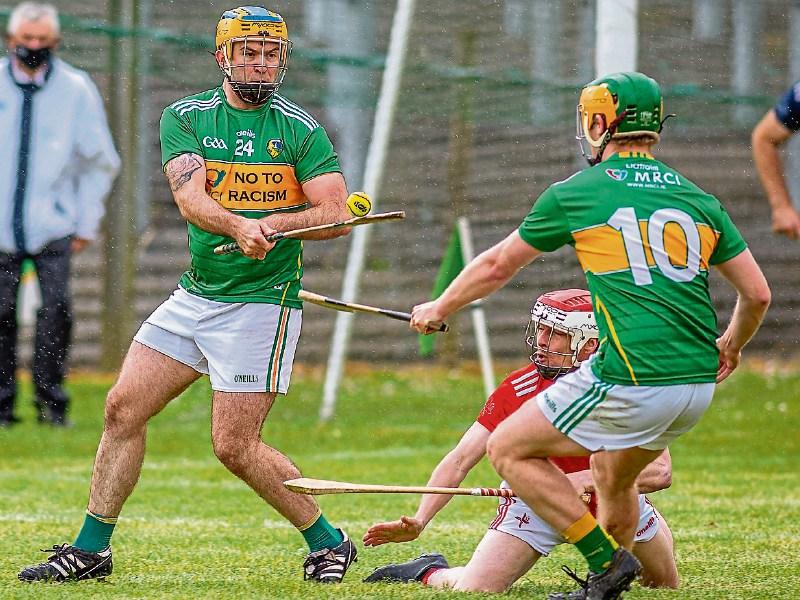 Fair to say that Olcan Conway was not a happy man after last Sunday’s Allianz NHL Division 3B loss to Louth, his unhappiness stemming from a poor performance and a controversy over what appeared to be a good point that was taken off his team by the referee.

Speaking after the match, Olcan told the Observer “It is one of the ones it is hard to like because we didn’t play particularly well, I suppose which is very disappointing. We had opportunities to win the match and got into a position to win it, and then probably lost it ourselves again.”

His ire was increased over a controversy about a Leitrim point that appeared good and was added to the scoreboard only for Galway referee Brian Keon to rule later that the scoreboard was wrong, leaving Leitrim level at a period during injury time when they thought they were ahead.

“But then we were told now, it was a draw. There was a lot of confusion at that stage. But we should still have managed the game a little better from that point and got another score. We did have opportunities to get other scores, but we didn’t take them unfortunately.”

The Leitrim manager had Louth pegged well before the start as a team to watch and it proved that way on Sunday: “ Louth came out of the blocks sharp. They are a big strong outfit. They tackled hard and they were getting the ball in and it took us a while to find our feet. They were able to get the ball in direct and they picked up a lot of breaking balls and were able to get the ball over the bar.”

For his troops, it is a case of having to pick themselves up again and get ready for Fermanagh: “It is a difficult one to take. It is what it is. But we will have to try to take it on the chin and move on. When we did find our feet, we did hurl for a while in the first half. Again, they pushed up on us. There was a strong breeze in the first half. We were disappointed the breeze died down in the second half altogether.”

A happy and relieved Louth boss Paul McCormack said he was “delighted with the win and it was all about getting the result today. Both teams had only three-and a half weeks to prepare and had no real games in that period. I know both sides had challenge matches last week but that’s not in the cut and thrust of the National League.

“We knew we were in for a real tough battle today. Leitrim was coming off the back of a good Nicky Rackard campaign last year and they stayed in that Division. We know how competitive that Division was.

“They ran Sligo close, and we know Sligo are a good side. As a result, we gave Leitrim full respect coming here today. But it was also important for us to watch out in terms of our own play. It is all about the result and I am delighted the fellows saw it out. That shows that we are on an upward curve.”

Seeing the result was crucial after some tough experiences last year: “Last year we were in games in Division 3A and competing right until the end. Then in the last five or six minutes we would fall off. Thankfully, we didn’t do that today. We had serious quality in the last four or five minutes to get those crucial scores and to get us over the line.”

McCormack believes that the switches made after Leitrim got their second goal saved the day for Louth: “We made a few switches, introduced some fresh young legs. Neil Thornton debuted with two points. Sean Kerrisk did well and hit over a point, a class player. Conor Quigley was the third man who made his debut and Tommy McCreesh also made his debut, and made a big contribution for us today too.”