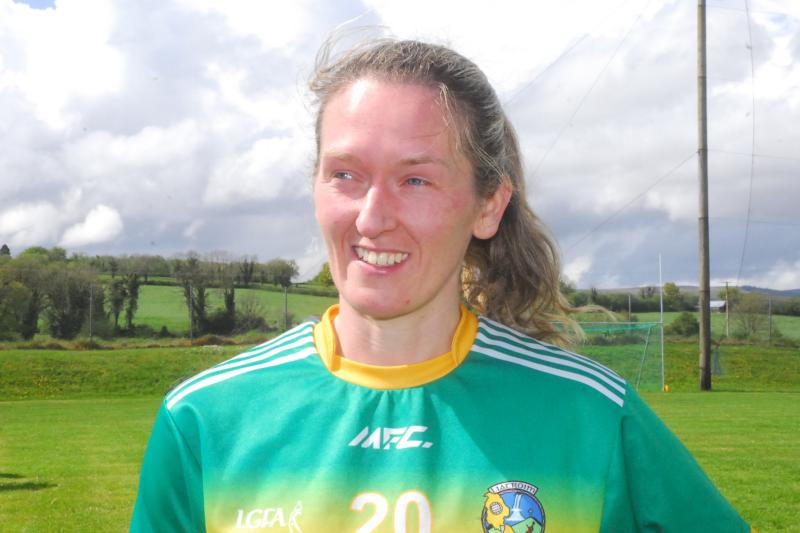 Sunday’s Lidl Ladies NFL Division 4 3-14 to 3-6 victory over Louth was a big statement but for new Leitrim recruit Ailish Cornyn, the victory carried extra significance as the former Cavan All-Ireland winner dedicated the victory to her late mother Margie.

A member of the St Francis club, Ailish has been a regular sight on the playing fields of Leitrim for many years but played all her inter-county football with Cavan, winning the All-Ireland Intermediate title in 2013 with the Breffni Blues. Ailish had finished up with Cavan two years ago but a promise to her mother Margie, who sadly passed away last November, meant Ailish started a new chapter in her footballing career last Sunday in Ballinamore.

An emotional Ailish revealed to the Observer that a promise to her mother brought her back to inter-county football: “It was just fantastic to put on the Green & Gold of Leitrim, itt means a lot - I always had the green & gold in my heart but from a young age, I started playing with Cavan and I just continued up the ranks with Cavan. I finished two years ago with Cavan and I just had that break away from it.

"I played all my club football in Leitrim and it was one of the wishes of my late Mum, she passed away last November and it was one of the last things she said to me that she’d like me to put on the Green & Gold of Leitrim. So to fulfill her wish and get a win for Leitrim, it is an emotional day .... I’m sure she is looking down, along with Daddy, very proud, hopefully they are anyway. This win is in memory of my Mum.”

Ailish thanked manager Hugh Donnelly and her new teammates for their warm welcome into the Leitrim set-up: “Hugh rang me last year, inviting me on to the panel. I just thought about it for a wee while and personally I had a few tough months. Then at the start of the year, I decided I’d give it a go and go back into county football again. I’m delighted I did and I’m just thankful to Hugh and the management team for giving me the chance to play for Leitrim.

It is fair to say that Ailish is impressed with the talent in the Leitrim ranks: “You could see the panel of players made a difference today, players coming off the bench and every girl who was out there today gave an immense effort. You have the likes of Leah Fox, Shaylyn Ward either side of Michelle Guckian and girls coming off the bench like Bronagh O’Rourke, Ailbhe Clancy - there is massive competition for places there and Leitrim football is in a great place.

“Hugh and his management team have brought a level of professionalism there, every girl wants to wear the jersey and hopefully it is the start of a very successful year for Leitrim and for many years ahead.”

The St Francis player also sung the praises of top scorer Michelle Guckian: “Michelle has huge strength and ability, she can kick off right and left, she can turn off both sides which is a massive effort to have because you know you can play the ball either side of her.”

Louth proved stubborn opposition but it was nothing less than Ailish expected: “We knew it was going to be the key game for us and to just start off with the first game being the toughest game, Louth being a strong outfit. We knew we had to show up today and thankfully we did. Eventually we got to grips with the game and came out strong winners in the end.”