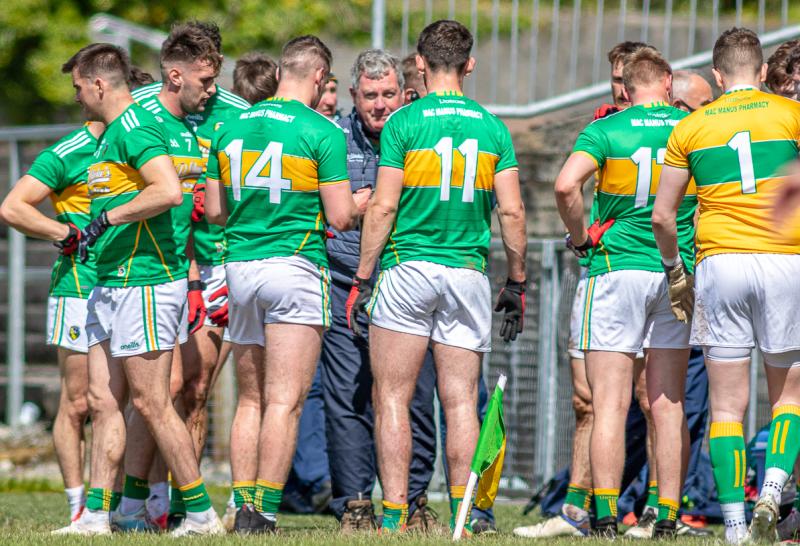 It is safe to say that there will be a lot of internal analysis and hard questions being asked in the Leitrim camp this week after Sunday’s demoralising Allianz NFL Division 4 North defeat to Louth. At least that is the strong message Terry Hyland is sending out a loss that ended the slim hopes of a promotion push this year.

Leitrim have a good record against Louth in Avant Money Pairc Sean Mac Diarmada over the years but it was Mickey Harte’s team who sent out a message on Sunday with a dominant display and deserved victory.

Typically, Terry Hyland was not making excuses after Sunday's 0-19 to 0-10 defeat, pointing out that he and his management team would have to look at everything, including themselves, in the wake of the defeat: “I didn’t really get talking to the lads, obviously you can see they are disappointed, of course they are disappointed, they didn’t come here to have a bad performance and they didn’t come here to lose a game.

“We have to bear the brunt of that as management. Our job is to give these guys direction and maybe it is a systems failure.”

Intriguingly, the Leitrim manager felt that his team were simply out-worked by the visitors in the second half: “We started reasonably well just after halftime and then we just let the game get away from us and once Louth got that four or five point gap, we probably lost our shape that little bit trying to chase the game and we created avenues for them.

“To be fair, they took that and they worked probably harder than we did as well and looked to get the ball back a bit more than we did - you can’t take it away from Louth, they were the better team apart from that 15 minute spell before halftime.”

Neither did he seek to blame the forwards for the lack of scores, pointing out reasonably that you can’t score if you don’t have the ball: “We weren’t winning the ball in the middle of the park, it was very simple. You can’t blame the inside line because the ball wasn’t getting up there so the honest answer is why weren’t we getting our hands on the ball around the middle of the park?

“That is what we have to look for going forward next week to see where that system broke down and where we can correct it. We weren’t winning primary possession, we were getting caught and turned over and you have to credit Louth for a certain amount of that, they pushed up on us but also we didn’t seem to get enough of ball to get it forward and create the opportunities.

“That is what we have to look at in training and it is down to how we coach them and what we can do with them.”

Louth also had to get credit for their performance on the day: “You have to allow that, at times today, Louth played better than we did and when they had the upper hand, they got the scores that probably we didn’t get in the first half.

Neither did the former Cavan boss seek to hide behind excuses of compressed preparation time or an intense schedule of games: “We can make excuses and I’m not one to be making excuses, it is no different for anyone else. Certainly the majority of teams only had the same run-in period.

“It is not ideal at the minute, it wouldn’t happen in a normal competition but as they say, it is not a normal time. Three or four weeks to get ready to play in competitions, three weeks to see you out to the end of it, to see where you are - we’re seeing it with all the teams, it is just probably being seen as a warm-up challenge for the bigger guys for the championship and maybe that is the pity about it.

“There is no recovery time, if a guy picks up a knock, they are back out with it again in seven days so you don’t really have time. You can really only have one training session during the week where you can do anything meaningful because you’re back into it a couple of days later. But it is what it is.”

The return of Ryan O’Rourke to the Leitrim colours was one of the game’s few bright spots for Leitrim: “Ryan has been one of the leading lights for the last number of years for Leitrim and it is great to see him back. Nobody wants to see any player from anywhere not being fit to play.”

Looking ahead to the final Northern section group game against Antrim next Sunday, Terry believes Leitrim need to look at where it has gone wrong for them so far and work to rectify it: “It is one of those strange leagues where you have no control over it, when it goes wrong, it goes wrong. We have to look at what happened as a group and we have to bring that self analysis into the game against Antrim to get a result.”