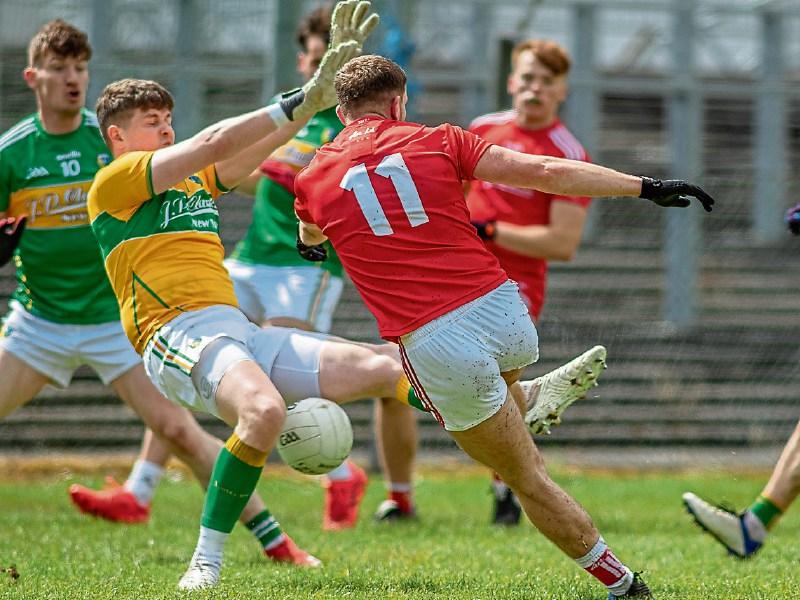 After last week’s loss at home, it was a much chirpier Mickey Harte that greeted the press last Sunday. It was his first win as Louth manager but the result that his players needed after the bitter blow of losing at the death to Antrim in the first game.

“A win makes a big difference to any team that needs a win, and this team needed a win,” reflected the former Tyrone boss. “I felt really bad for them last week because I think they played enough good football to win the game and we didn’t.”

“It took a lot of resolve from the lads to prepare to come here, to this ground as they have taken a couple of beatings from Leitrim in the past and those scars had to be removed as well as trying to win this game, so I think it was incredible the way they got on with the job.”

It was a free-flowing performance for the men in red, with 12 of their final tally of 19 points coming from open play as Harte’s troops notched up another attacking display having bagged 2-7 from play last weekend.

Ten different players got on the scoresheet today, which is testament to the style of play the Ulster man brings to the table, where he expects all on the field to be capable of doing whatever was asked of them.

“That is what we want to see, to know these players are comfortable on the ball, we want them to be comfortable in any area of the field, it is long since gone that numbers on your back mean anything about where you should be playing.”

Asking the players to commit to this mentality is one thing, but the wily veteran knows that they need to get results to justify the commitment, with the win away to Leitrim testament that they are going in the right direction.

“I think it a question of learning to play the way we want these boys to play, they are taking it on and full credit to them, they need a bit of success to validate that method of play, I think they played well last week but we didn’t get the result.”

“This means we have to say is this right or is this wrong, can we play this way or not, so the fact we got a result endorses the fact this is a good way to play football and they will be able to take that on board.”

In a day of many positives, one of the few negatives was a strong period from the hosts after the first water break where they turned the game on its head, as a five point deficit became a one point lead at half time.

Harte was annoyed to have opened the door for a Leitrim comeback, but was proud of his troops for making sure they saw the game out and embraced the challenge, using the carrot of promotion as the motivating factor to make sure any second half comeback didn’t arise.

“We took a hit when we were well in control at the water break, that first water break didn’t serve us well so to be one down at half time I think wasn’t a true reflection of the way we played in the first half. With the football we played we really shouldn’t have been behind.”

“That was the message during the water break in the second half, that we were in this position before and we let it slip, if we a haven’t learnt from that in this game, it could end up being lights out in terms of where the league is concerned.”

The use of the panel is paramount for any side to be successful and the multiple All Ireland winner was forced into making some changes to the side at short notice, as the influential Andy McDonnell and up and coming forward Sean Marry missed the cut due to injuries.

Both cases were nip and tuck to feature during the week and were named in the match-day programme to start, but with the short window for recovery this season Harte was taking no chances.

“Andy has long term injury, he has been nursing it along, I suppose a lot of play has come up in the last few weeks because we played in house games, we played challenge matches and then the last day we played Antrim. Andy just doesn’t have that recovery time; he can’t recover that quickly so that is why we had to cut him out of the game today.”

“Sean has a hamstring worry and did a test on it yesterday and he felt it was good, then he went out today, did the warmup on the heavy ground and felt like it just wasn’t right. So we made the wise decision not to start him and cause more bother, as their isn’t much time to recover from hamstrings at this stage.”