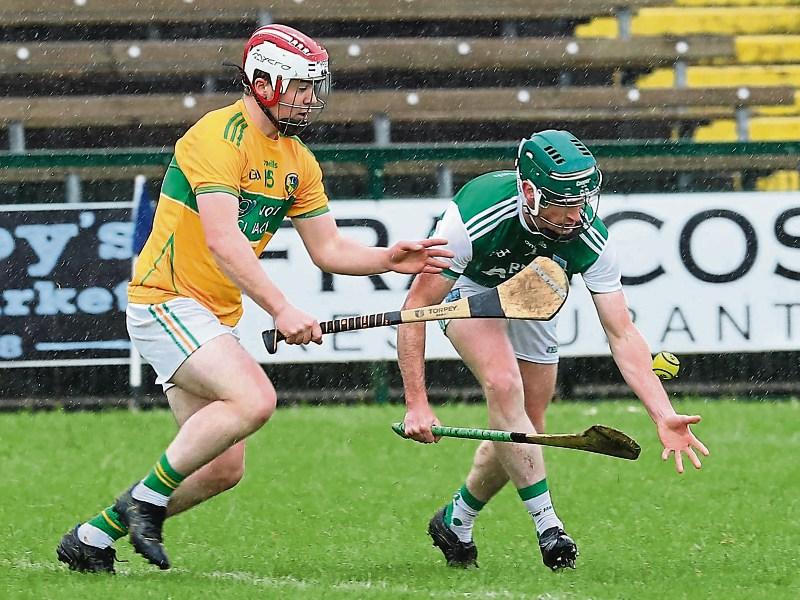 Having suffered the heartbreak of a controversial loss to Louth in the opening round, Olcan Conway’s troops would have been hopeful of registering a victory in Enniskillen but despite a bright start, they found the Ernemen too good on the day.

Fermanagh went into the game still reeling after allowing a seven point lead slip the previous week, to only draw with neighbours Cavan. Once again Sean Corrigan was at his exceptional best but afterwards Fermanagh Joe Baldwin praised the entire squad and rightfully said he couldn’t actually single out any player who didn’t perform on the day.

Leitrim’s hurlers will be bitterly disappointed by the loss as their already slim hopes that Louth might slip up in their remaining games vanished, the Louth men prevailing by a point against Cavan.

It was Leitrim who started the brighter and after only three minutes the Connacht side led by two, thanks to Liam and Colm Moreton, after some good work by Cork native Cathal O’Donovan.

Karl McDermott moved in for his third of the day, while Liam Moreton and Conor McShea exchanged scores as the rain started to come down quite heavily on the Brewster Park surface. Sean Corrigan then landed an exquisite score to leave it 0-5 to 0-7 after 24 minutes but it got better for the Ernesiders as further points from Francis McBrien and Caolan Duffy left it 0-7 each with half-time nearing.

Francis McBrien got forward again from midfield to slot over and just before the break Fermanagh got in for the opening goal of the game. Sean Corrigan played in Shea Curran for the first three pointer to leave it 1-8 to 0-7 at the break.

Sean Corrigan (2) and Caolan Duffy got Fermanagh off to the perfect start in the second half but Liam Moreton responded for Leitrim to leave it 1-11 to 0-8. Thomas Cleary at midfield has been playing some great hurling this year and his point was soon followed up by Sean Corrigan to leave eight points between the sides.

Colm Moreton responded for Leitrim with a point and just moments later Moreton finished off a flowing move, after a fine ball in by James Rooney saw Leitrim score their only goal of the game, 1-13 to 1-9 at the water break

John Duffy showed his class with a point from 45 yards out and Fermanagh were now bossing the game and quickly forgot about that Leitrim goal as further points from Francis McBrien and Sean Corrigan left it 1-16 to 1-9. With nine minutes remaining, James McNabola reduced the deficit to six but once again John Duffy responded for Fermanagh, 1-17 to 1-10.

Substitute Shane Crowe set up Karl McDermott for a score but at the other end, the instrumental Sean Corrigan pointed twice to leave eight points between the sides at the full time whistle.

Fermanagh will certainly build on this victory, a draw with Cavan and a win against Leitrim now sets up Baldwin’s charges to go into the Louth game knowing that their fate is in their own hands.

Leitrim face Cavan in their final game of the campaign on Sunday June 6, at home but thoughts must already be turning towards getting ready for the Nicky Rackard Cup campaign in July.