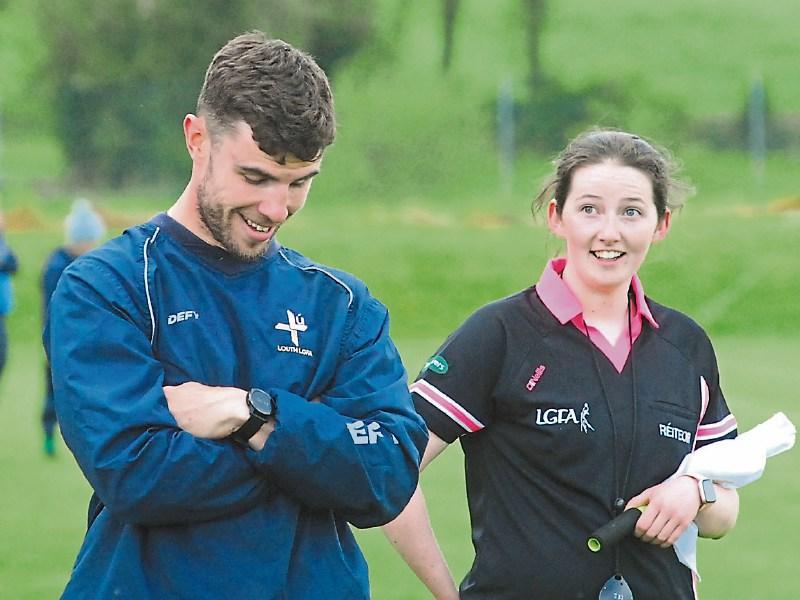 Louth manager Wayne Freeman shares a lighthearted moment with one of the match officials in Ballinamore Picture: Willie Donnellan

Frustrated at the result, frustrated with some of the decisions that went against his side, Louth manager Wayne Freeman was very impressed with the accuracy of his Leitrim opponents last Sunday in Ballinamore.

Approached after the final whistle, the Louth manager begged off media duties but on Monday, Freeman had analysed the game and pinpointed where Louth lost their way.

“There was a ten minute spell there when we conceded 1-5 and got a red card and that was the changing of the game,” Wayne told the Observer, “I got the chance to look back over the game and I actually thought we were the better team for the opening half and should have been further ahead at halftime. They grew in confidence and the Leitrim forwards, their accuracy was incredible - we kicked a lot more wides than they did. It is fine margins really.”

Hard to talk about the game from a Louth perspective without mentioning a sin-bin and a red card for the Leinster side and the Louth manager felt it handicapped his team: “We played 30 minutes with 14 players between the yellow and red cards and you’re not going to win close games with 14 players for that amount of time.

“In fairness we battled hard but it was kind of inevitable once the red card happened. Playing half a game with 14 players is tough, especially against a good side. Leitrim are a good team, I was impressed by them.”

Neither did Freeman blast referee Kelly Cunningham from Offaly, commenting “Referees make mistakes the same as the rest of us” but he was mystified Leitrim did pick up a few yellow cards: “I thought the Leitrim challenges were pretty clear. I didn’t see the red card, I actually missed it but looking back on the video, it is very hard to see what happened. Everybody thought it was a free for us, I don’t really know what happened.

“Things happen in the flow of the game - I thought our first yellow card was extremely soft. The ball was 50-50, two girls went for the one ball and I thought that was really unlucky. Then there were a few in the second half, we were punished, they weren’t but that happens, we just have to take that.”

Freeman agreed that the team travelling to these games is at a disadvantage: “They struggled last year with the journey to Cooley and so did we on Sunday, two and a half hours journey in the car, it is always hard to get out and play football. Then the conditions with hailstones and lashing rain, everything adds up. It is a long day, you are leaving at 9 am in the morning for a 2pm throw-in and it is a tough day mentally. They found it last year and we found it this year.”

Yet there is no doubt that Louth would relish another crack at Leitrim Ladies: “It is one-one and hopefully we will have another shot at them. We’ve a long way to go, we’ve three games to go to get there and we have to concentrate on Antrim this weekend.

“We’re definitely hurting over it, I thought we played well at times but then we fell back into their tactics at times which suited them. We fell away from the way we were playing in the first half when we were moving the ball quickly. Either of us who lost, it would have really hurt because there is a little bit of a rivalry that has been created over the last year or two. They had new management, so did we last year and there is a lot going on in both counties.

“We have to learn, we had a good preseason, had good results in our challenge games and maybe this will bring us back down to earth a little bit and hopefully we can turn it around.”