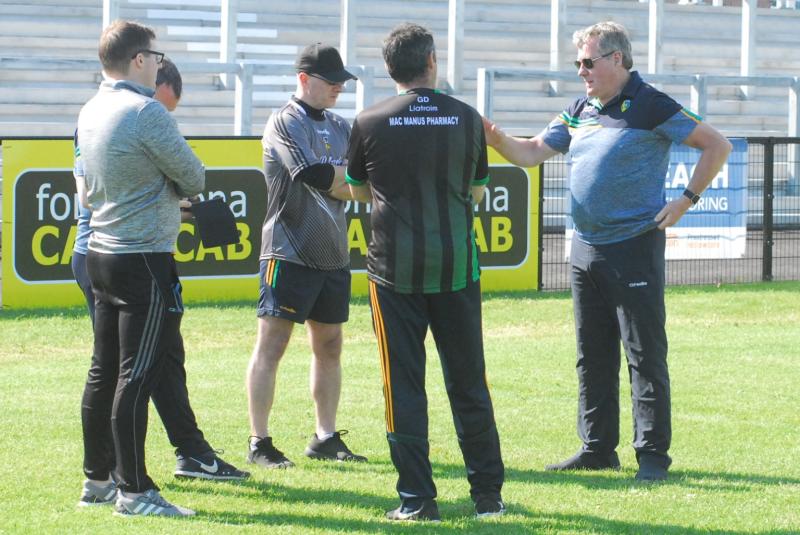 Terry Hyland chats with his management team after the final whistle in Corrigan Park on Sunday Picture: Willie Donnellan

Croke Park officials have revealed that all counties involved in the Allianz NFL Division 4 Shield agreed that the competition would proceed straight to a Final involving Sligo and Wexford.

Leitrim manager Terry Hyland told the Observer in Corrigan Park on Sunday evening that he would definitely be interested in another League outing against Wexford but echoed calls for a neutral venue to be considered for the game. "We'd definitely take the game. We’ll probably be looking for games in the next couple of weeks but it depends on where they are going to play it.

"In my opinion, it really should be a neutral ground and go and play it somewhere, I can’t understand we’ve been told we had to play in a northern league, we weren’t allowed to travel and now suddenly, either Wexford can travel up to Leitrim or Leitrim can travel down to Wexford."

However, the GAA announced on Monday afternoon that the Division 4 Shield series would go straight to a final between Sligo and Wexford, fixed for O'Moore Park in Portlaoise on Sunday June 13, leaving Leitrim with no further games in the League.

Terry Hyland will be on the lookout for challenge games in the coming weeks after Croke Park announced that the proposed Allianz NFL Division 4 Shield series will go straight to a final between Sligo and Wexford.

With time constraints due to the Covid-19 Lockdown restrictions, all counties were informed before the League began that if a county reached a League Final, which are scheduled for the weekend of June 19-20, and they were due to be in championship action on the weekend of July 26-27, the League Final would not be held and joint winners would be declared.

That means that should either Kerry or Donegal qualify for the Division 1 Final, there would be joint winners are both in championship action but a Tyrone versus Dublin meeting could take place. A number of other Division Finals also can not take place due to the ruling.

Avant Money Pairc Sean Mac Diarmada will, however, see action over that weekend with the Division 3 Semi-Final between Derry and Limerick taking place at the Carrick-on-Shannon ground.