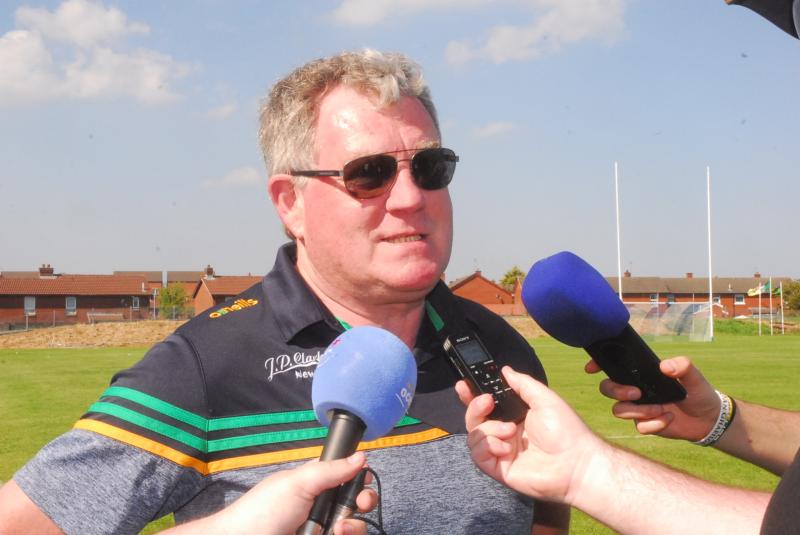 Leitrim manager Terry Hyland chats with the media after the game in Antrim Picture: Willie Donnellan

If there is one thing Terry Hyland is, it is a straight talker and it was no different in the sweltering heat of Corrigan Park last Sunday when the Leitrim manager chatted to the media following a heartbreaking 2-17 to 1-19 loss to Antrim in the final round of the Allianz NFL Division 4 North campaign.

From his unhappiness at the decision of referee Kevin Faloon to award Antrim a late free to his belief that there is real talent in the Leitrim ranks, it was his contention, bluntly stated, that it was the substitutes that made the difference in getting Leitrim back into contention against the home side on Sunday.

With Leitrim 11 points down at one stage, they staged a remarkable recovery that was thwarted by Tomas McCann’s late injury time winner and when asked what changed between Leitrim’s early struggles and their ferocious final quarter fightback, Hyland didn’t sugar coat it in any way!

“Let's be straight about it, it was the lads who came on made the difference, there is no point in ducking and diving behind it,” Hyland told the Observer, “We ended up having to change virtually our half-forward line and our midfield and it swung the game back in our favour.

“That’s the difference - the lads who came in were being handed an opportunity and I think they grabbed it with both hands and it is going to make it very interesting going forward for the next couple of weeks. Who is going to put their hands up to be starting in the next game?

““As always sometimes, it is about getting an opportunity to give these lads game time in a competitive game. The fact that we were so far behind, it gave us the opportunity to take a risk and we did and I suppose it worked out well for those fellows.”

If the Leitrim boss was happy with the impact his subs made, he was less so with referee Kevin Faloon’s decision to award Antrim a free when the entire Leitrim travelling party felt that the Green & Gold had earned a free.

“We should have got a result anyway, I’m not saying we would have won it, I think a draw probably would have been a fair result in the end and I’ll be straight about it, I think the refereeing decision down here in front of me cost us that point” continued Hyland.

“You couldn’t teach a more perfect near hand tackle than what was being done and a free given against us. Ok we conceded it seventy yards away from our own goal but it allowed them the momentum to get back up the pitch when we had them under pressure.”

Hyland believes that the talent is there in the Leitrim ranks - the task is to harness it and get it to deliver on match day! “The lessons for them as a group that the last 15 minutes showed they could compete with anybody in their own group, we didn't do it for long periods in a lot of the games we played in and that is the problem.”