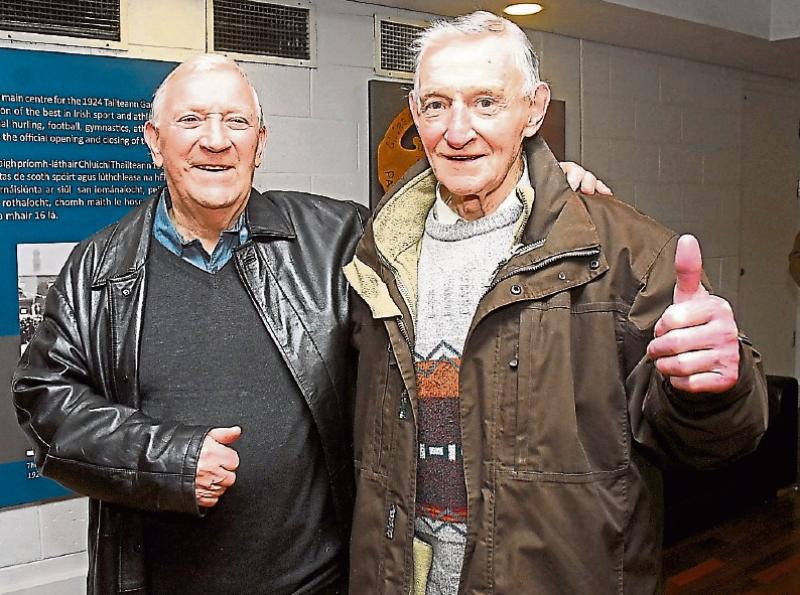 Still together, Leitrim football’s Terrible Twins. The news of the death of Cathal Flynn, so soon after the passing of Packie McGarty, had minds swirling back to their long partnership in the green and gold of the county they both loved so well.

Their first foray in the same forward line was on the Fenagh side that won the Leitrim Minor Championship In 1951 and ‘52. A mere two years later, when scarcely in their twenties, they togged out together in the Connacht dressing room for the Railway Cup final in Croke Park, in which Leinster had a lucky two point win.

And so it would go on, the team photos of that era, with Packie’s arm around Cathal’s shoulder.

Little wonder that they were both nominated for the Connacht team of the millennium, for they continually featured as top scorers for the province, against the top defenders in the country. It was no bother to either of them to play with the big boys and be honored by selection on the Ireland teams against the Combined Universities.

Cathal was a native of Gorvagh and had attended Finisklin NS and then Adoon, where his father Charley was Principal. It was in the confined spaces of the Adoon school playground that Cathal began to make a name for himself as someone to watch and he earned selection on the Fenagh Juvenile team, on a side that had others future stars like Jimmy McKeon and Brendan Heeran.

Football was in Cathal’s blood, for his father had played with the Keatings club in Dublin, while teaching in the city and had lined out for the Dubs In 1911, 12 and 13, before coming back to Leitrim and making a name for himself in GAA circles, by playing for the county, before becoming Chairman of the County Board and then persuading Peter O'Hehir, the father of broadcaster Micheal, to come and train Leitrim for the 1927 Connacht Final.

That date would go down in Leitrim GAA history, with Tom Gannon, the captain,  receiving the Connacht Championship Cup and then surviving over future decades to be with Declan Darcy to hold the Nestor Cup In Hyde Park sixty seven years later in 1994.

The Leitrim side of the 1950s and 60s is often referred to as the McGarty/Flynn era, as they were two of the many stars of county sides that were the talk of the country and so unlucky not to have won one or more Connacht Senior titles. The National League of those years would see Leitrim hold their own with the best and  be proud of ace free-taker Cathal Flynn, who held the record of top scorer in the country for many years.

Cathal became the darling of Franciscan College,  Multyfarnham In 1952, when he scored 1-7 out of a 1-8 score line, to beat St Mel’s of Longford in the Leinster Colleges Final. Incidentally, Multy’s other point that great day, came from Leo Kenny of Ballymahon, who would become a Longford star and during his banking career come to Drumshanbo. Allen Gaels, Leitrim and Connacht would benefit so much from Leo’s devotion to the GAA.

Cathal Flynn had particular reason to be proud of Padraig Kenny, Leo’s son, who was an incisive forward in that 1994 Connacht Final and also to meet Leo’s daughter Caitriona at the 2019 Allianz League Final In Croke Park, when Cathal and his surviving teammates from the 1959 League semi final met their opponents from Derry in an anniversary dinner, sponsored by Mike Carty of Rosie O’Grady’s, New York.

Caitriona was there with her husband, Seamus Clarke as sponsors of the Leitrim team. This would have been the last occasion when Cathal and Packie and their other team mates would have had a chance to reminisce about their careers in the green and gold. Their rewards were few, but all of them did it for their love of Leitrim.

Cathal and Packie are now in the Croke Park of the Heavens and if St Peter has his camera ready, there will be an up to date photo of Packie, with his arm round Cathal’s shoulder. Together still.

Cathal’s passing will be mourned by Leitrim GAA followers everywhere, who will join in heartfelt sympathy with Cathal’s wife, Terry, their daughter Clara and all the Flynn and extended family.