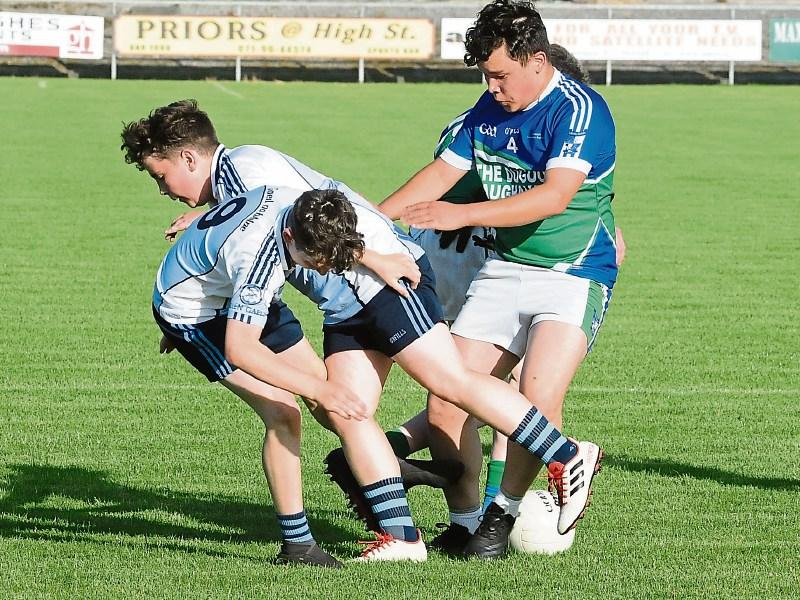 It tells you much of the story of this 2020 Barna Waste U13 Division 2A Final in Pairc Sheain Ui Eslin last Friday night that even St Joseph's supporters commented openly just how impressive a dominant Allen Gaels were on the night.

It looked as if we were going to get an old fashioned shootout at the start of this delayed 2020 decider with both teams finding the net with their very first attacks but from then on, a dominant Allen Gaels took controlled and steamrolled their way to the title despite St Joseph's best efforts on the night.

The opening minutes were frantic with Mark Nolan producing a lovely finish after two minutes to find the St Joseph's net but the Aughavas and Carrigallen combination hit back in great style, Cian McManus scoring an excellent goal after they had turned over a kickout.

It almost seemed as if we were watching a soccer game with nothing but goals being scored as the barnstorming Daire McCabe soloed through for two goals inside 60 seconds to leave St Joseph's reeling, unable to stop him.

McCabe turned provider to set up Mark Nolan for a good point on six minutes before McCabe added his own a minute later.

St Joseph's halted the runaway Allen Gaels train with a well worked point from Joey McBrien but any respite from the Gaels storm was short-lived as a long ball found McCabe who rounded the keeper to drive home a fourth goal after less than ten minutes of play.

Joey McBrien's long ball found Brian Maguire who thumped over a huge point while McBrien landed two points, one from a free, and when Keelan McGovern added a point on 15 minutes, the gap was now down to six points.

McBrien converted another free to leave five between the sides but Callum O'Rourke shattered any growing hopes that there might be a comeback on the cards when he gathered a great pass from Mark Nolan to fire home a goal before the break.

Allen Gaels led 5-2 to 1-6 at the break and when the second half resumed, they ruthlessly set about killing off the contest with a swashbuckling style. but Joseph's will wonder what might have been as the first chance of the game saw Keelan McGovern's shot blocked and the ball hit the post before being cleared.

Callum O'Rourke added a point for the Gaels and they quickly added points from Mark Nolan, David Chang and a sixth and final goal from McCabe, his fourth of the game to finish the game as a contest. The Drumshanbo lads would add points from Senan McGovern and Kuba Zapala before keeper Gavin Gallogly made a good save to deny the Gaels a goal.

McCabe and Pierce McKeon added points before St Joseph's started a late rally with points from Joey McBrien (2) and Jack McManus and a goal from sub Joey McManus but it was McCabe and Senan McGovern who had the last scores of the game to seal a famous victory.