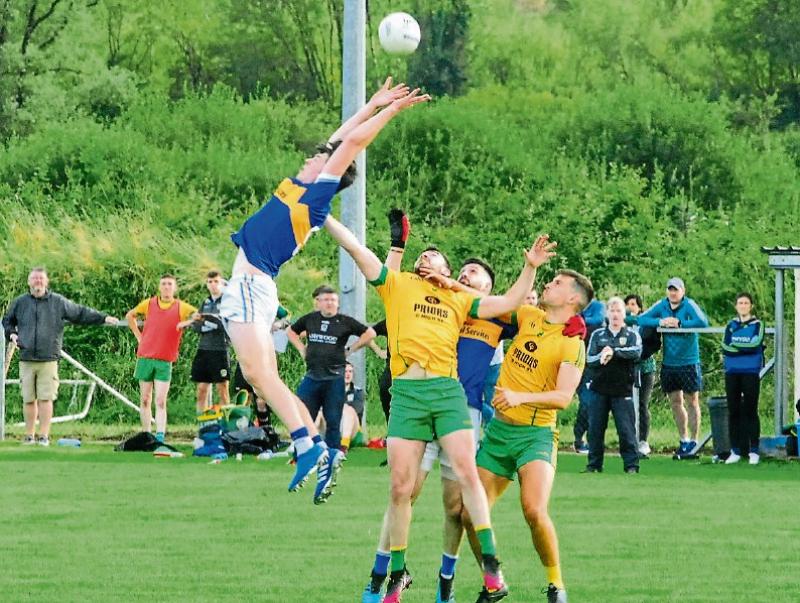 There was an air of inevitability about Saturday’s Connacht Gold SFC clash in Aughawillan as a dreadfully weakened home side just couldn’t match the power and pace of a wasteful Ballinamore Sean O’Heslins who picked up their first win of the campaign.

In a strangely subdued meeting between these two sides, the absentees on the home side meant that Aughawillan had a huge mountain to climb before a ball was even kicked as they fielded without Mark Plunkett, Barry Prior, Michael & Sean Quinn and Gerard McGovern.

It put them in a huge hole as Ballinamore made sure there was no way they wouldn’t win with a display that boasted everything you might want except perhaps a bit more clinical finishing.

Both sides were guilty of some bad misses throughout this contest but with a bit more composed finishing, Ballinamore probably should have had at least three more goals and a lot more points as they never looked in any danger of losing this contest.

They had to contend with injury worries of their own as they lost Brian Banks and Matthew Murphy from their defence to injuries in the first half but their strength in depth and strength meant they were better able to compensate for their losses than Aughawillan were.

Aughawillan opened the scoring with a fine point from centre back Rory McTague, bursting forward on the wind. Shane Moran saw a fisted effort gathered by Colin Maguire while Morgan Quinn put a free wide - all inside the first 120 seconds of action.

Noel Plunkett replied with an excellent point from the wing but Ballinamore were well into their stride and three points from Peter Reynolds, Wayne McKeon (free) and a fine Luke Murphy strike saw them stretch their lead to four.

Aughawillan are nothing if not battlers and even drastically weakened, they replied with three points of their own - a Ciaran Gilheaney mark, another Rory McTague effort and a Morgan Quinn mark had them just a point in arrears after 16 minutes.

And although O’Heslins would only score three times in the rest of the half, points from Mark McGrory and Dean McGovern, it was the final score in added time that killed off the contest when a long free saw the ball break off Niall McGovern but the Ballinamore man used his strength to fire low to the net.

That gave Ballinamore a 2-5 to 0-5 halftime lead but they still lived dangerously as they twice needed Darren Maxwell to clear dangerous balls. Halftime sub Barry McGovern made an instant impact when he finished a length of the field move off with a fine point that might have been a goal with a cooler finish.

Aughawillan almost broke through for the goal they needed but Maxwell made a good save from Ciaran Gilheany after a high shot bounced off the bar, the ball going out for a fifty that was put wide.

In fact, Aughawillan were missing chances they would normally take and a Wayne McKeon free must have felt like a dagger. Ciaran Gilheany score a superb point from a sideline ball but it felt as if Aughawillan were bailing water out of a sinking ship as two Shane Moran points were answered by scored from Morgan Quinn and Gilheany frees.

Mark McGrory was denied a goal by a fine Maguire save while Oisin McCaffrey put a goal chance wide. Aughawillan were no better at the other end, missing chances to cut the gap with Dean McGovern ending a nine minute spell without a score with a fine point.

Barry McGovern almost finished off a great move with a goal but his shot skimmed off the crossbar and over while another turnover presented the youngest McGovern with another goal chance, the ball rising too high for a point.

Ciaran Gilheany tapped over an injury time free but the last word was a Wayne McKeon free that gave Ballinamore a ten point winning margin.