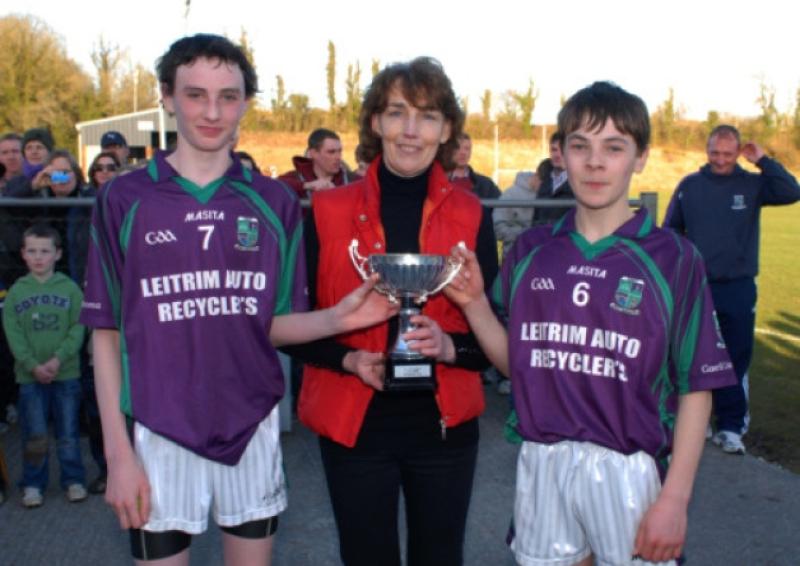 Living up to their pre-match favouritism, Leitrim Gaels put in an excellent all round performance to overwhelm a gallant but out-gunned Aughavas side to claim the Under 14 League 11-a-side title last Friday evening in Dromod.

Living up to their pre-match favouritism, Leitrim Gaels put in an excellent all round performance to overwhelm a gallant but out-gunned Aughavas side to claim the Under 14 League 11-a-side title last Friday evening in Dromod.

The Gaels cut a swath through the round robin stages, receiving two walkovers as they won their four games by a staggering average of 29.75 points. However, their only close game came against Aughavas where they prevailed by just two points so the favourites knew they were going to be in for a stern test.

And even though the 11 point margin winning margin suggests a comprehensive win, it was in fact Leitrim Gaels’ lowest scoring total of the Division, suggesting that Aughavas again gave the winners a tougher examination that the scoreline suggests.

The Gaels got off to a good start and led by the influential Shaun Chandler, they led by nine points at the break and when Stephen Goldrick scored a goal just after the break, it left a game Aughavas with a mountain to climb.

Aughavas tried hard and were unlucky with a number of scoring chances but the Gaels were just too strong in too many positions and they must fancy their chances at the 13-a-side championship later in the year.

Shaun Chandler started the Gaels off with a first minute point and added a free two minutes later. Shane Rynn extended the Gaels lead on six minutes with both Chandler and Rynn adding a further point each by the tenth minute.

Niall McCabe opened Aughavas’ account with a 15th minute point after a good save from Gaels keeper Matthew Earley denied them a much needed goal. The Gaels responded with a point apiece from Chandler and Rynn.

And Chandler put the game beyond Aughavas after 18 minutes when he converted a penalty. Niall Moran hit back with an Aughavas point but a fifth Chandler point of the half left them 1-8 to 0-2 ahead at the break.

Any hope Aughavas had of making a comeback were dashed in the very first minute of the second half when Stephen Goldrick scored the second goal of the game for Leitrim Gaels. That killed off the game and it took another ten minutes for the next score, Chandler again the scorer.

Aughavas had a goal chance but Niall McCabe was just off target while he was denied again by Matthew Earley with five minutes to go. Points from Niall and Daragh McCabe ended the scoring for Aughavas but it was the Gaels who had the final say with two Stephen Goldrick points.