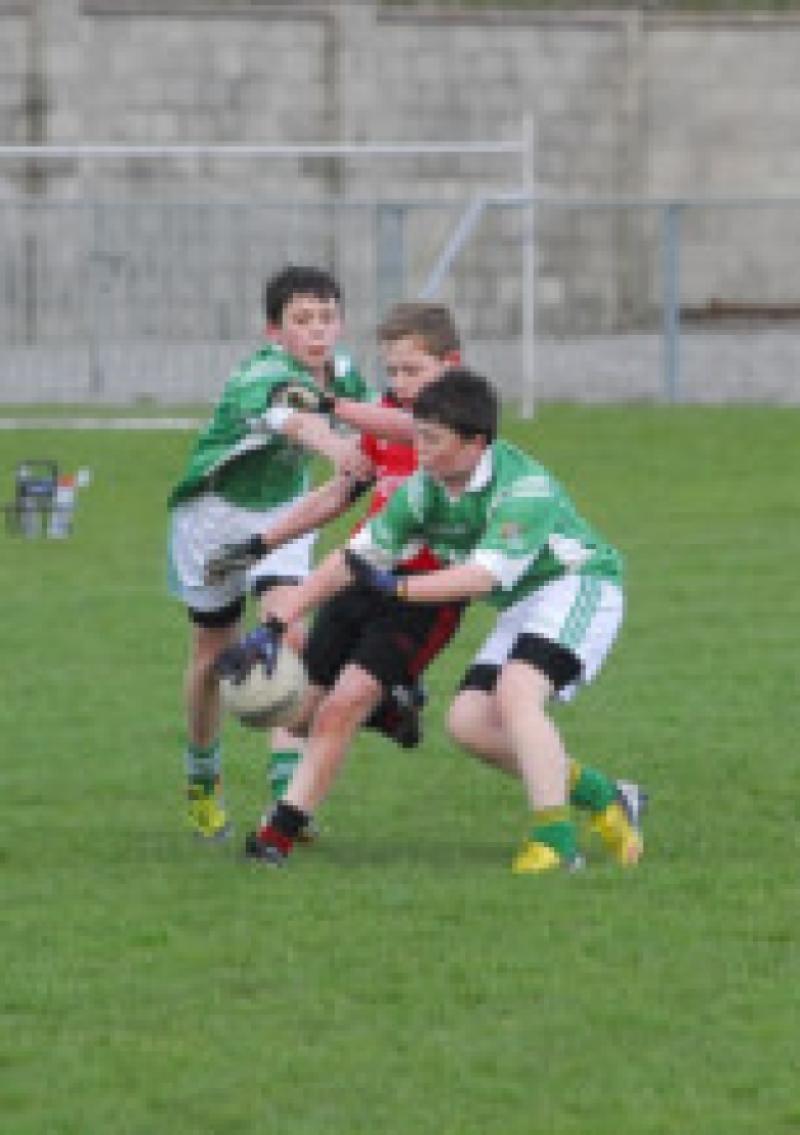 Four goals from the dangerous Gavin Gordon, an formidable half-back line and a man of the match display from keeper Kevin Bohan were the ingredients that saw Mohill eventually see off a determined Fenagh St. Caillin’s to claim the U-14 League 15-a-side title after extra time in Ballinamore last Friday.

Four goals from the dangerous Gavin Gordon, an formidable half-back line and a man of the match display from keeper Kevin Bohan were the ingredients that saw Mohill eventually see off a determined Fenagh St. Caillin’s to claim the U-14 League 15-a-side title after extra time in Ballinamore last Friday.

In an exhilarating match, Gavin Gordon’s aerial prowess saw him grab the goals that propelled Mohill to victory over a highly thought of Fenagh side who had no answer to his ability to get vital touches on high balls or set up his colleagues for goals.

But as influential as Gordon undoubtedly was, the foundations of Mohill’s victory was built on a superb half-back line of James McNabola and the Harkin twins, Evan and Sean, who seemed almost impregnable at times, their hard running and great defensive work leaving Fenagh in their wake.

Time and time again, the trio surged forward, Sean Harkin in particular, pushing their opponents back while they never allowed the influential Jack Gilheaney the sort of room he normally enjoys.

Equally important was the decision to drop Dylan Gaffey back in front of Riordan O’Rourke as an extra defender – the Mohill lad won an ocean of possession and stopped Fenagh building up their usual momentum, leaving them oddly out of sorts.

The truth was that Mohill had this game wrapped up five minutes from time only to concede three late goals that forced extra time and as much as they thoroughly deserved the win and were the better team, were it not for some outstanding saves from keeper Kevin Bohan, they could have easily lost this encounter.

Bohan saved a penalty and made at least five saves that prevented certain goals as Fenagh refused to lie down, driven by the outstanding Oisin McLoughlin, Jack Gilheaney and Nathan O’Rourke.

The early exchanges were even with Fenagh going into an early lead with points from Riordan O’Rourke, Jack Gilheaney and Nathan O’Rourke while Gavin Gordon, Jamie McCaffrey and Jordan Reynolds replied for Mohill.

Mohill took control when Gordon floated a lovely cross for Tony McDonagh to fist the ball to the net on 17 minutes and after an Evan Harkin point, Gordon turned scorer himself when he fielded a high ball and burst through to score.

Fenagh got a lifeline when Riordan O’Rourke was clearly pulled, Jack Gilheaney’s spot-kick barely making it across the line before James McNabola pointed to leave Mohill 2-5 to 1-3 in front at the break.

Fenagh started the second half well but saw Kevin Bohan making a great diving save to deny Owen McLoughlin and then stop a penalty from Gilheaney as his team-mate McCaffrey scored a fine point.

Gilheaney pulled back a point after Bohan made another save to deny Nathan O’Rourke a goal and Mohill made it count when Gavin Gordon fisted a McCaffrey long ball to the roof of the net on 11 minutes.

Mohill’s Jordan Reynolds added 1-1 in the space of a minute, putting over a free and tapping home a Gordon pass to put Mohill 3-3 in front but Fenagh hit back with a fisted Nathan O’Rourke goal to give them a lifeline. Riordan O’Rourke swapped points with Dylan Gaffey and Tadhg Mulligan as Nathan O’Rourke rattled a shot off the crossbar.

The match seemed all over with three minutes of normal time left but Gilheaney saw a long range free spilled into the net while Aaron Smith managed to put the rebound from another Bohan save, from a Conor Dwyer shot, to the net in the last seconds.

Fenagh kept searching for an equaliser and a foul on Oisin McLoughlin as he shot saw an injury time penalty, converted brilliantly by McLoughlin to force the game to extra-time.

Fenagh were again first off the mark with a Riordan O’Rourke free but Mohill stamped their dominance on the game when Gordon twice fisted long balls to the net in the next four minutes. Riordan O’Rourke pulled back a point but a foul on Gordon resulted in a Mohill penalty, expertly dispatched by Evan Harkin.

Riordan O’Rourke and Tadhg Doherty swapped points in the first minutes of the second half of added time before another long range Gilheaney free ended up in the Mohill net, leading to a nervy ending that saw Bohan complete a great display with another save from Nathan O’Rourke in the last minute.