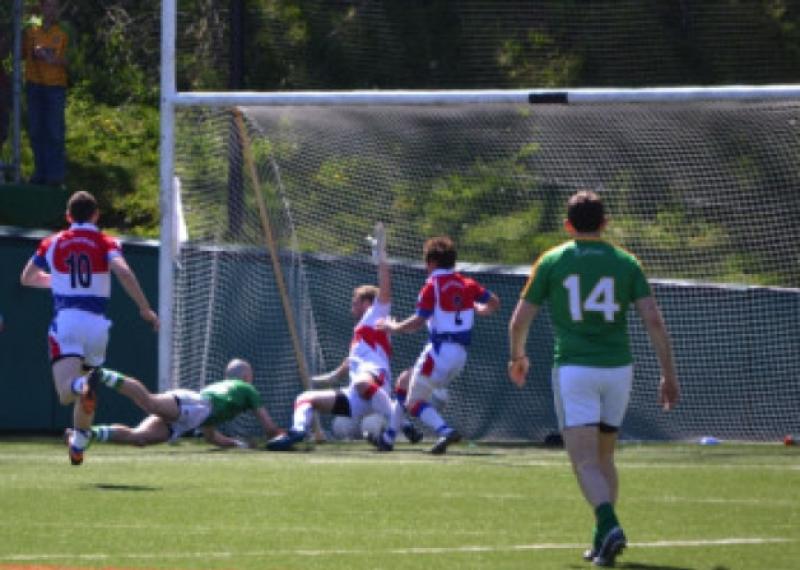 On a festive afternoon on Sunday last with the sun splitting the stones New York was given a lesson in all facets of the game at Gaelic Park NY on Sunday in what was a resounding victory for Leitrim.

On a festive afternoon on Sunday last with the sun splitting the stones New York was given a lesson in all facets of the game at Gaelic Park NY on Sunday in what was a resounding victory for Leitrim.

With over 2000 people on hand with hundreds on the field mingling with players after the contest was over it was a perfect way to start the Connaught Championship.

Leitrim took the best punch NY had, a harmless one, as it turned out, in the first seven minutes, to easily run out victorious. NY had three wides in the early going when they needed to be perfect. Leitrim responded clinically with 1-03 in rapid succession to set a marker down.

When Cathal McCrann turned away a Jason Kelly shot in the16th minute. It was the home side’s last hurrah and an ominous sign. A robust 1-8 to open the second half again showed the ability of Leitrim when they were in full flow as they moved the ball quickly up the field and into scoring position.

The victory was built on a completely dominating center field performance by Tomas Beirne with plenty of support from Darren Sweeney. An area where NY never got a grip or even a toe hold. Beirne was outstanding and his fielding, distribution and general play were the foundation of the win.

The game was decided in the first 20 minutes as dominance on the scoreboard after clinical shooting by Leitrim were the differences.

New York did have the first score when Justin Burke fired over after Jason Kelly was fouled and they were showing some good form in open play. They had three wides however with a Conor Lynam effort the closest.

Leitrim had their first goal chance within two minutes when a Kevin Conlon drive was dropped by Gavin Joyce but the ball was scrambled to safety before St Mary’s Robbie Lowe could react. Wayne McKeon, when he raced up the right wing, Darren Sweeney when the ball was recycled intelligently and a James Glancy score followed before the first major blow arrived for the winners.

Wayne McKeon was again involved when he took a pass after a NY kick-out broke his way. He sprinted forward before passing across the goal to the waiting Robbie Lowe who punched to the empty net.

When New York did finally get their second point from a Jason Kelly free, it was immediately cancelled out by an Emlyn Mulligan free which showed Leitrim’s killer instinct.

New York’s one clear cut shot at surprise arrived when Jason Kelly stormed up the center after the side worked the ball out of the right corner. He surprised all with a missile to the top left corner, he was definitely thinking goal. Cathal McCrann was surprised but reacted well with a stretched parried save.

In the aftermath the Tiger attacked again. Leitrim added 1-02 in four minutes with Mulligan firing a bullet to the net after a beautiful shimmy and run.

With 12 minutes left on in the half it was an unsalable lead for the winners 2-06 to 0-02, even at this early stage. NY did have their best period of the game in the last eight minutes of the first half they had three points to Leitrim’s two with Justin Burke firing a towering shot over after a great run by Lonan McGuire.

Conor Lynam followed an Emlyn Mulligan free with a point from play but Mulligan again was able to hit the mark with another free as they continued to show their killer instinct. Justin Burke did have another free for NY but it still left them swimming in a deep pool at 0-05 to 2-08.

Leitrim added 1-08 in the opening 22 minutes of the second half to put the game completely out of reach and set up a meeting with the winners of Sligo and London in the semifinal. Tomas Beirne won the throw in and stormed forward to fire over while Emlyn Mulligan followed it with his second goal with three minutes on the clock when Glencar/Manor’s Darren Sweeney found him in space.

Two towering kicks from Lowe and Mulligan showed the shooting prowess of the forwards while Beirne was driving for goal when his effort screamed over the lathe in the 20th minute. New York had no response. They were at six’s and sevens in the rear with Paul Lamb gone off injured at the break while Jason Kelly did not come out for the second half either which took away their main play maker.

As a result Justin Burke who looked dangerous never got a quality ball in the full forward line. The play of the center axis of Fabian McMorrow and Gary Reynolds was also important at this time and they easily swept up anything that NY could throw their way.

When New York had a kick-out, it invariable was pumped long and over the course of the game was only won cleanly once by their side. Beirne was dominating the section between the 45’s and was having a remarkable outing.

New York finally had a clear cut scoring chance with 13 minutes left when Lonan McGuire attacked and fired a low shot at goal which Cathal McCrann touched around the post at full length. CJ Molloy followed with a pointed free after Rory Woods was fouled but almost immediately he was sent to the line with his second yellow.

Glancy and Brennan added points for Leitrim as the rout continued before Woods had NY’s final score. An early ball from Justin Burke found him in space and he clipped over perfectly, a sign of what the pair could do if given supply.

They were not allowed to finish on a high however. Emlyn Mulligan completed his hat trick of goals and a second New Yorker saw red as the game ended.

Leitrim just may have a serious say in the Connaught Championship this season on the strength of this outing. A score every two minutes is impressive regardless of the opposition and they only had seven wides over the game.

Cathal McCrann made two excellent saves and his first one came at a very important juncture. His kick-outs were varied which kept NY on the hop although anything high was invariable secured by his team.

Fabian McMorrow, Gary Reynolds and Wayne McKeon all impressed at the back with McKeon doing untold damage going forward.

Tomas Beirne was outstanding, would have been icing on the cake if his last shot stayed low. Darren Sweeney also complemented him excellently. Emlyn Mulligan was in the top scoring ranks of the League and followed it here. Punishes with his frees and deadly in front of goal.

Robbie Lowe, James Glancy and Brendan Brennan off the bench were others who showed well up front.

New York had few positives. Lonan McGuire battled throughout and did his best work in the other half of the field. Alan Raftery, second half and Ronan McGinley who had a marked effect when he came on, also fought hard.

Jason Kelly started brightly and was a huge loss at the break, Justin Burke showed tremendous promise and had his man beaten. Conor Lynam also had a few flashes.