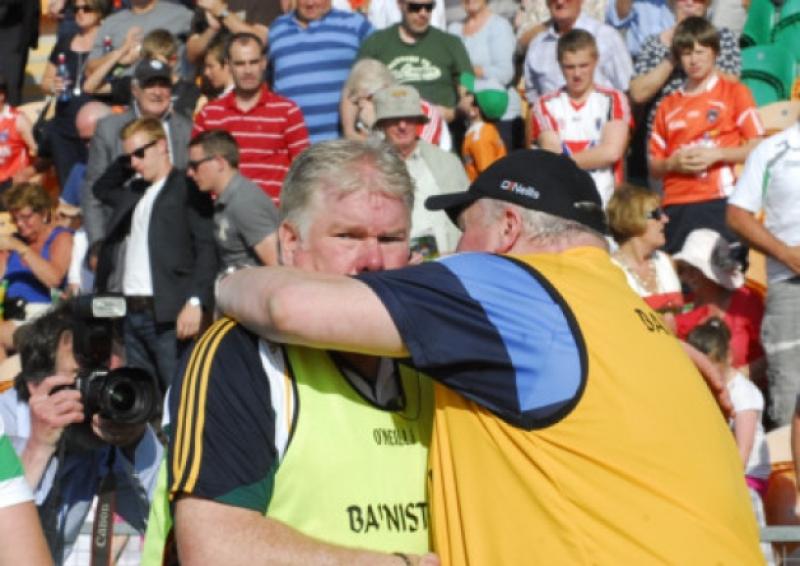 Joint managers Brian Breen and George Dugdale will take some time to consider their future after last Saturday’s demoralsing loss to Armagh.

Joint managers Brian Breen and George Dugdale will take some time to consider their future after last Saturday’s demoralsing loss to Armagh.

Both Breen and Dugdale confirmed to the Observer that they would take some time to consider their position with both men pointing out that their two year term had come to an end.

When asked about their future, Dugdale was non-commital as he said “I don’t know, our two year term is up so it is not in our hands. I hadn’t reflected on anything other than the match today so I have to go home and think about it. It is not in our hands, it is up to the County Board.

HIs fellow joint manager was similarly cagey but Breen admitted that were a decision to be made straight after the match, there would be only one outcome - “I think it is unfair to make a decision right now, at the end of the day, you have to look back and see what your contribution was overall and not just on a result today.

“We’ll take a few weeks to reflect on that and if there is anything more we can offer, the desire is still there. It is very easy to quit after a loss like that but I don’t want to quit and yet whatever is good for the team, myself and George will decide.

“We felt we had done an awful lot of work, today didn’t reflect the work we done and the tough decisions we had to make along the way. We had to make some very tough decisions but I don’t regret them for one second, sometimes you pay the price for something like that too.

“From our own point of view, we just want to take the next couple of weeks. If you are going to make a rash decision now, there is only one decision but we have to weigh up all our options, what contribution we have made and what we can make and we’ll take it from there.”

Breen, however, defended his team and pointed to a crippling injury list that has dogged Leitrim’s campaign and highlighted some of the positives of the two year term - “It is a young team and we spoke about all that we have achieved, they have achieved a lot in a short space of time. We can dwell on all the negatives, we can dwell on the loss today but those bunch of lads, they won a FBD League for the first time, they won a Qualifier last year for the first time ever. They are a great bunch of lads.

“If Emlyn Mulligan was fit to play against London, I have no doubt we would have won it. If Darren Sweeney hadn’t come off in the replay, I’d have no doubt that we would have beaten them, we’d be preparing for a Connacht Final this weekend. Those are the things that affected us most. Last thing I want to do is make excuses but we haven’t got a bottomless pit of a squad, we had to bring in Barry McWeeney last weekend to make up numbers.”