St Manchans
advance to U-21
‘A’ final 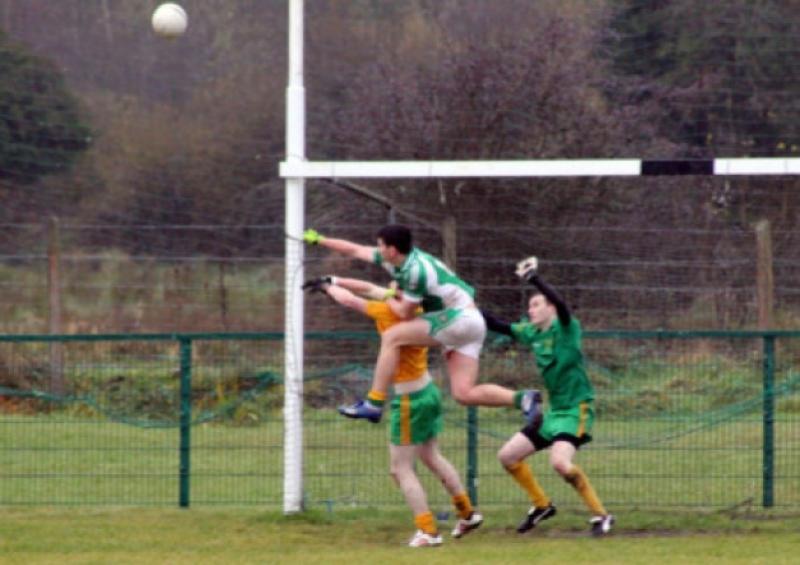 St Manchans booked their place in the U-21 A Championship Final when they recorded a comprehensive win over Ballinamore last Sunday.

St Manchans booked their place in the U-21 A Championship Final when they recorded a comprehensive win over Ballinamore last Sunday.

Ballinamore began the game well but for the vast majority of the opening half they were simply trying to contain their opponents and Keith Keegan’s goal on the stroke of half-time went along way towards ensuring St Manchans would be competing in the final.

Ballinamore simply had no answer for the work rate applied by the Mohill and Eslin players. With Ballinamore attempting to build from the back, the St Manchans players worked tirelessly to ensure no Ballinamore player was afforded an easy opportunity to bring the ball out from defence.

From a Ballinamore point of view, the game will not be remembered fondly. The conditions didn’t help but all over the field not only did the St Manchans players appear more skilful, they also appeared to have a much greater desire. The likes of Matty Murphy and Luke Murphy impressed but there weren’t many positives for Ballinamore.

The opening exchanges saw Ballinamore look up for the challenge as Shane Moran set up Dean McGovern for the opening score of the game but St Manchans replied with points from Eanna Madden, Donal Flynn and John Mulligan.

Two John Mulligan frees, both awarded and an Eanna Madden point further extended the lead before Shane McGowan pointed on the stroke of half-time. It was to get even better for St Manchans as they scored a bizarre goal in injury time through Keith Keegan to take a 1-7 to 0-2 lead into the interval.

Ballinamore began the second half well with Andrew Burns pointing to reduce the deficit and they came close to scoring a goal after Conor McTague’s shot hit the crossbar. A scramble ensued before the danger was eventually cleared and that was Ballinamore’s last real chance to get back into contention.

Nine minutes into the second half St Manchans pounced for their second goal. Cian McGuinness claimed a high ball and had the awareness to offload the ball to John Mulligan who showed plenty of composure to goal from close range.

That goal ended the game as a contest and the final 20 minutes saw St Manchans drop the intensity while Ballinamore managed to add a few consolation scores to their tally.